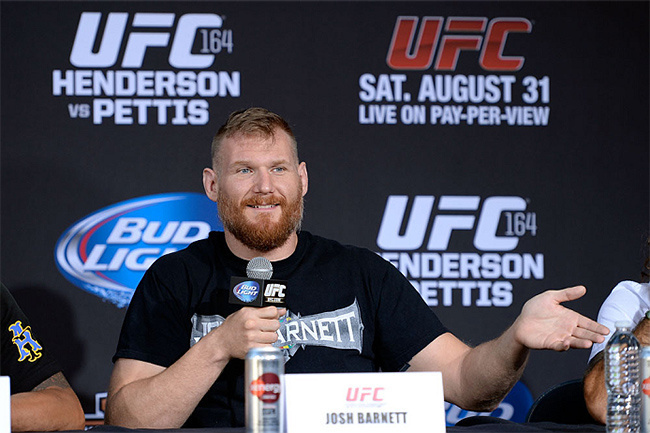 Through a nearly 17-year fighting career spent both at the margins and in the spotlight, UFC heavyweight Josh Barnett has cultivated a particular personality: that of the the leg-locking, face-smashing, pro-wrestling Viking with a taste for violent hand gestures and heavy metal guitars. But that doesn’t mean he doesn’t have champagne tastes, too. Here, “The Warmaster” shares his tips regarding the finer things in life. Among them: how to wear high-end clothes, the top-shelf booze in his liquor cabinet, and the abuses of the English language that, were he a nun, would have him reaching for a ruler and aiming for your knuckles.

It sounds douchey, but most of my suits are Versace. That’s not because I have some sort of hankering for it, but I used to go to the Versace store in the Forum Shops at Caesar’s Palace, and I’d always get tremendous discounts. I like a European, closer fit, and their stuff always just seems to fit me fantastically well. But I don’t own things with Versace logos. You wouldn’t know anything I owned came from there other than if you actually took it off and looked at the tag.

I have some Louis Vuitton small pieces that I think are fantastic because they’re so durable. I like the idea of buying something that’s made well once and keeping it. You can’t really do that with cheap stuff, and a lot of things nowadays are designed to be used for a very short length of time, then they’ll fall apart and you go and buy another one. I don’t really like disposable consumerism.

Let’s say it’s more casual: jeans, belt, dress shirt tucked in, a tie, but the top button is undone and it’s a somewhat of a disheveled look. I think even just a four-in-hand knot is a good way to go. In most cases, especially if you’re wearing a suit, you should always wear a tie. But if you’re in jeans, it can be worked around.

I believe in taking a woman with you when you go shopping. If she thinks you look hot, then you’re doing something right. I mean, don’t just grab one off the street that you’ve never met before; that could be a difficult situation in itself--“Get your hands off me!” “I just need someone to give me their personal opinion!” But if you do have a good-looking lady friend in your life, or even a gay guy—anyone who would potentially look at you in terms of attractiveness. I’ll take compliments wherever I can get ‘em.

My beard is full and lush right now. I never went non-beard after the last fight—I had a movie I did and the beard was part of the outfit, so I just stuck with it. I had thought of shaving it down, just for fun, and then growing it back out for the fight, but it’s really sort of taken on a personality of its own, and people have really seemed to rally around it. They’re very pro-beard when it comes to me.

Don’t have an ironic beard. It doesn’t matter how big it is or the shape of it, but don’t make it silly—it’s gotta be the real thing. Stand up for your beard and treat it thusly.

I don’t like this latching onto of noncommittal words: “kind of,” “sort of.” It happens because, in my opinion, people don’t want to say what they mean and take a stand for it. I don’t mean that in an epic way; I just mean in general: If you say how you feel or you make a statement, stand by it. Don’t allow waver room in your words. Be deliberate in speech. If you’re gonna hit me with a “kind of" or “sort of,” I don’t know what the fuck you’re saying and why you’re bothering to say it to me if you’re not sure about it. Save “kind of” for where it applies: “Kind of like this over here, but not exactly.”

When it comes to phrases like “couldn’t care less,” or whether you’re implying or inferring, or any other turn of phrase like that that people screw up, think about that stuff. “I could care less”? Why would you even say that if you could? If you could care less, then go for it. Try. I think you should care less right now. Bring it to the pinnacle of caring less.

I’ve got a bottle of Suntory Hibiki blended whiskey that’s 30 years old—actually, I guess it must be 35 by now. I got it after a fight in Japan. It’s by far the best whiskey I’ve ever had, and anybody else that’s been able to try it, which is a pretty select few, have all agreed. It’s probably been a good three years since I had it. It’s smooth, not excessively caramel-y, not very smoky either. It’s got a little bit of a whiskey bite, but not much at all—it’s about medium on the palate and goes well with just about anything. It’s so clean it’s almost worth just drinking on its own, after a meal or whatever.

I have an 11-year tequila from Asombroso, which is really hard to get a hold of—I just lucked into meeting the guy that owns the company. I’ve taken that bottle to people that are tequila fanatics. They’ve never heard of it, they’ve never tried it, and all of them have been incredibly surprised. I had an ex-girlfriend who did not like the taste of alcohol at all; she drank drinks that were as fruity and as masked as they could come. One time, a bunch of us were passing around a glass of this tequila and everyone was taking sips and raving about it—it’s oaky smooth, doesn’t have a lot of bite to it. She took a sip and while she said, “I don’t really care for it,” it affected her in no way, shape, or form. It was that smooth.

I’ve been reading this Graham McNeill novel from the Warhammer fantasy universe. Big burly dudes smashing shit and fighting bad stuff and killing things—that’s fun. I don’t always have to read something highbrow. I do like science fiction quite a bit: I’m looking forward to reading Mona Lisa Overdrive, which is the last of the trilogy that started with Necromancer. Or I’ll go back and reread Cormac McCarthy novels that I own.

Life’s always busy, but it’s busy in a very singular way right now with training, and training’s going great. But I always find time to take a break from that, at least mentally, to do something else. Specialization is an important thing. And although the idea of being an artisan or a craftsman or somebody that is a specialist is starting to become more en vogue, even with that, that shouldn’t be the limitation of all you are and what you can do. I always try to keep an open mind, keep doing new things, and keep pushing the envelope.