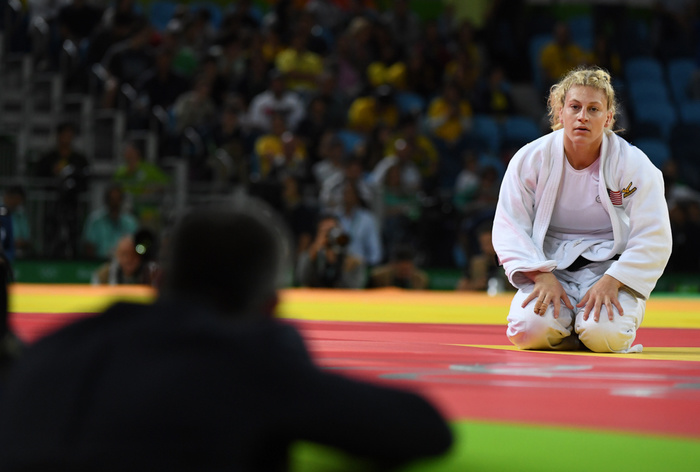 On August 11, Kayla Harrison defeated Audrey Tcheumeo in the finals of the 78kg women’s class to win her second Olympic gold medal in judo. In the minutes following her victory, the 26-year-old officially declared her departure from the sport, saying “I’m happy, I’m retiring. Two-time Olympic champion. That’s it.”

The poor woman barely had any time to enjoy her retirement and reflect on her career as the most decorated woman in American judo history before the MMA-related questions started. In the hours following the win and the announcement, Harrison was already being asked if she would follow in the footsteps of her former training partner, Ronda Rousey. Four days after that, Time Magazine ran a profile on her under the headline “This Gold Medalist Could be the Next Ronda Rousey.”

In a way, this was a bold step forward for women at the 2016 games. In the midst of a glut of reporting so sexist that it would be laughable if it weren’t so exhausting, Harrison, at least, had the distinction of being compared to another female athlete. It was still reductive of her career in general and her thoughts on MMA specifically, though. “US Judo Legend With Very Specific Skill Set Feels Ambivalent About Potential MMA Future” is a far less catchy hook, but it would have been a more accurate description of what’s going on in the athlete’s head right now.

Harrison doesn’t outright reject a move to MMA in the interview—and she admits that a few promotions have reached out to her and her team already—but she does have concerns about the prospect. 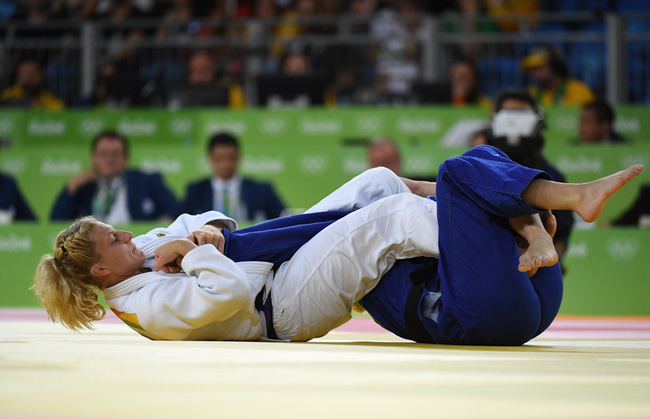 Her judo career has far surpassed Rousey’s at this point, and she realizes those skills would give her some advantages in the Octagon, but she’s spent her entire life dedicated to one specific martial art and she’s well aware of the steep learning curve that would be ahead of her if she made the transition. “I’m not educated on MMA very well, but from most of what I see it’s very different from judo,” she told Time in a video interview that accompanied their profile on her. “I think Judo is a really good base for MMA. I think it’s probably the best base. But having said that, I would be starting from ground zero. I don’t really know anything about punching or kicking or knee bars or heel hooks, or whatever they’re called.”

Her concerns about the way that fights are booked in mixed martial artists have come up a few times over the course of the Olympics, too. “In judo, you show up, there’s a draw, you have a tournament and every girl fights and the best one wins. And I think in MMA it’s sort of like they pick fights. To me that’s not really a sport,” she said to Time.

Shortly after winning her gold, she put it more bluntly: “I don’t know if I’m cut out for a world where you get fights based on how pretty you are and how much you talk, and not necessarily what you’re worth in the ring.” 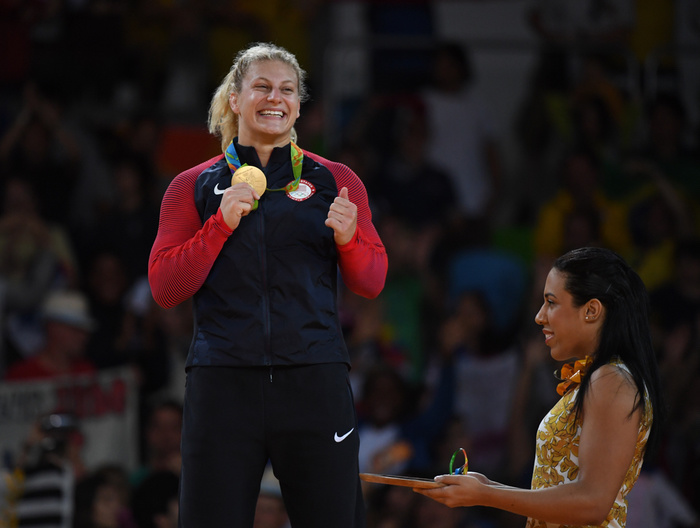 It’s hard to argue with her on this point, especially given the timing. While the International Olympic Committee is about as far from being a paragon of sporting regulation virtue as you can get without being called FIFA, there is at least an amount of logical progress that has come with Harrison’s competitive process up until this point, and being subject to the various whims of a promotion’s booking would certainly come as a frustrating culture shock to her. And while Olympians themselves have their own foibles—as Ryan Lochte and crew so unfortunately demonstrated when they territorially marked a Brazilian gas station with the essence of white privilege—most of them must look like angels compared to the man baby antics that are currently driving the UFC’s news cycle. It’s easy to see why an earnest and straightforward woman who has never had to worry about anything other than her performance on the mat and the charity she runs in her spare time would be reluctant to try to compete with that. (For what it’s worth, she’s hardly alone in that exasperation. Bellator fighter and former UFC lightweight champ Benson Henderson recently told Sports Illustrated that he agrees with Harrison.)

And the very act of expressing those feelings has led her to realize that she has another issue with the sport: the trolls. They started to come out of the woodwork after her comments about the importance placed on looks and quips in MMA and Harrison—who has referred to herself as “kind of a sop”—did not enjoy them. “All of these people just started sending me these really mean messages, like, ‘yeah, it’s good that you’re not doing MMA because you’re not pretty.’ And all this. I’m like, ‘well, this why I wouldn’t want to do it because I don’t like—this is not a respectful culture. In judo, no one would ever say something like that about anybody. It’s not about how pretty you are, or what you look like. It’s about what you’re capable of on the mat.” (For what it’s worth, she’s hardly alone in that exasperation. As a woman who writes about MMA and receives similar blowback, I agree with Harrison.)

On the other hand, she is aware of the massive popularity that MMA currently enjoys and she is mulling over what being a part of that could mean for herself (“Who doesn’t want to be rich and famous at some point in their life?” she quipped) and her charity. Harrison has big plans for the future of the Fearless Foundation, which she founded after her first gold win in an effort to bring more awareness to child sexual assault and to help survivors through a mix of education and sports the way that judo helped her through her own abuse as a child. And she knows that a career in the cage has the potential to help her realize those dreams. “I think about the reach that I could have, the MMA following they have,” she admitted to Time.

First, though, she’s going to follow in Rousey’s footsteps in an entirely different way: by taking time off. Harrison has dedicated most of her young life to judo, and she’s admitted that the past four years have been particularly hard for her both training and injury-wise. Now she’s going to enjoy a brief and well-deserved rest on those golden laurels of hers. “I know you all wanna know if I’m gonna do MMA or not,” she told reporters after she received her medal. “But tonight I’m just gonna live in the moment, be an Olympic champion, and tomorrow I’ll decide what my future holds... Maybe a month from now.”

Adeline Gray is Wrestling For a Gold Medal and For Equality