Julie Kedzie Breaks Down the Art of MMA Color Commentary

By Julie Kedzie as told to Josh Rosenblatt 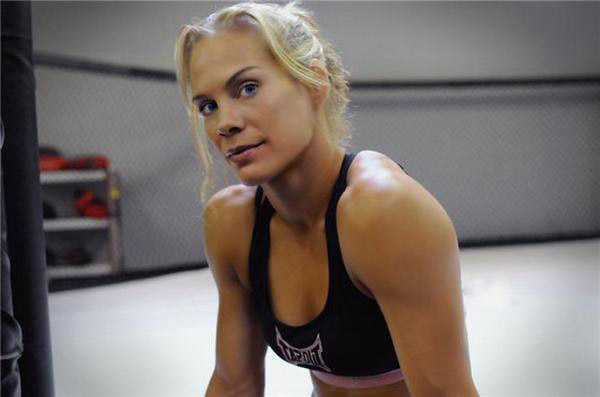 After a decade in mixed martial arts, Julie Kedzie will make her long-dreamed-for UFC debut next Saturday, July 27, in Seattle. Which means she's a little busy right now, training and sparring and cutting weight and running up and down mountains in her native Albuquerque. Still the longtime WMMA advocate found time last week for her second job: color commentaor for the all-women's fight league Invicta FC. Since the promotion debuted last year, Kedzie has called all six of their fights, slowly building a rapport with her longtime partners, Bellator light heavyweight Muhammed "Mo" Lawal and and play-by-play constant Mauro Ranallo.

Figuring that Kedzie didn't already have enough to think about, we gave her a call to find out what it's like calling a fight instead of fighting one.

Julie Kedzie: This time I think we were really getting the hang of it. Mo and Mauro and I were talking about it when we were pre-recording our intros. We were like, “Wow, I remember the first time we did this.” We botched shit so many times the first time through. But this time around we really got it. We were stumbling over words but we knew how to make adjustments. I feel really at ease with those guys. People seem to like us and it’s nice. It’s nice to be liked!

We’ve been the same broadcast team every single time except for one time where Mauro had different travel arrangements and couldn’t make it, so then Bas Rutten filled in. That was hilarious! I know he’s a family man and he’s a really great guy, but I was sitting between him and Mo and they're just so masculine, it’s like, “God I feel like I’m gonna get pregnant just sitting here!” Bas is so enthusiastic. He can jump from one subject to the next. Basically when he was speaking I didn’t want to say anything at all; I just wanted to listen to him. He’s so interesting and has had so many experiences. Plus he sang a Justin Bieber song during the middle of the broadcast. The song came on over the PA and Bas just started singing along.

Doing commentary is a bit scary when you’re getting ready for a fight like I am. To see people whacking each other it’s kind of like, “Oh jeez, that’s gonna be me.” If you see somebody get spectacularly knocked out you’re like, “Oh my gosh, I can’t believe what I’m doing next week”.

Almost every single broadcast the first tweet I get is, “You really suck at this.” And I’m like, “Aww man!” But then I think that if I really sucked that bad Shannon (Knapp, Invicta president) would have fired me. I’ll leave that up to my boss to fire me if she thinks I’m doing a shitty job. But some people say, “You got this move wrong.” And that’s fair. I want people to step up and say stuff like that is wrong. If they say, “Hey, I hate your hair” or “I hate the tone of your voice,” there’s very little I can do about that. One time somebody told me to take out the shoulder pads in my suit, but I don’t wear shoulder pads in my suit. Those are my shoulders! So I didn’t know what to do about that one. I can’t fix that. My shoulders aren’t getting any smaller.

I get some heat from fans for my post-fight interviews. My in-cage interviews suck, and people don’t like the way I’m a little too off-the-wall, a little too WAAAAAAA, THAT WAS A GREAT FIGHT!!! LA LA LA LA LA!!! Now I try not to be overly enthusiastic to the point where the focus is on me and not the fighter who just won. That’s something I’m really working on. But it’s scary being in front of people with a microphone and thinking, “This isn’t about me. This isn’t about me.” In some ways it's scarier than fighting. When I watch Joe Rogan do it, he’s so flawless. I study his technique. He puts his hand on the person to center them, to bring them to talking to him as opposed to screaming at the crowd. And then he allows them to have the space to say what they need to say. And then if the conversation gets too weird, he redirects where it needs to go. I feel like it’s my job to bring the crowd into the experience because this is fighting; this is for them. It's important for them to feel like they're part of it. MMA is a very accessible sport still. It's a sport where you can meet your favorite fight, whereas in basketball, meeting Michael Jordan's hard to do. And I want to keep the spirit of that going.

I don’t have any pre-show rituals warm-ups like vocal exercises or anything. I haven’t learned hot to do any of that yet. I drink a lot of coffee. But I try to get out there to the event as early as possible and then I go to the photo shoot that the women are part of just so I can familiarize myself with them. I’m sure a lot of them don’t like me, and that’s fine. A lot of them might be, “I want to fight her,” and that’s fine too. But I’m really not thinking about fighting them. I try to get to know them and their personalities so I can use it in the broadcast. Ashley Cummins, for example, does a lot of work rescuing animals and that’s the kind of thing you find out during the photo shoot. Ashley’s a police officer in St. Louis and she‘s always rescuing animals and getting them out of bad situations and fostering them. Little things like that are cool to see. They humanize the fighters for the people watching.

At this most recent event, when Tammika Brents got injured backstage and they called off her fight right before it was scheduled to start, I had to run backstage and conduct random interviews with people on the fly. And I had no idea what to say to them. The producer just said, “Grab fighters and interview them.” But as a fighter myself I’m not going to do it that way because I know what it’s like right before a fight and the focus you have to have and the problems you have to go through, so I basically went into the dressing room and yelled really loudly, “If anyone wants to talk to me to promote your fight, I’m going to be over here! If you don’t want to, don’t worry about it. Send your boyfriend, send your cornerman, send somebody else.”

I was scrambling. (UFC featherweight) Miesha Tate showed up but I didn’t really have any good questions for her because I didn’t know I was going to be doing interviews. I mean, the last time I was with Miesha I was fighting her, so that’s a little strange.

There was story going around that one of the fighters on the card, Mizuki Inoue, had missed her prom; she's 18 and missed prom because she was training for her fight. So when I saw (UFC heavyweight) Pat Barry backstage I asked him if he took his girlfriend, Rose Namajunas, who fought that night as well and who is quite a bit younger than him, if he took her to prom. He was like, “I don’t think she was born when I went to prom.” I honestly wasn't sure if he was being funny or if he didn't understand my question. Then he took the mic from me and started asking me questions. And I was dying laughing, thinking, “They’re not going use any of this.”