By Julie Kedzie as told to Josh Rosenblatt 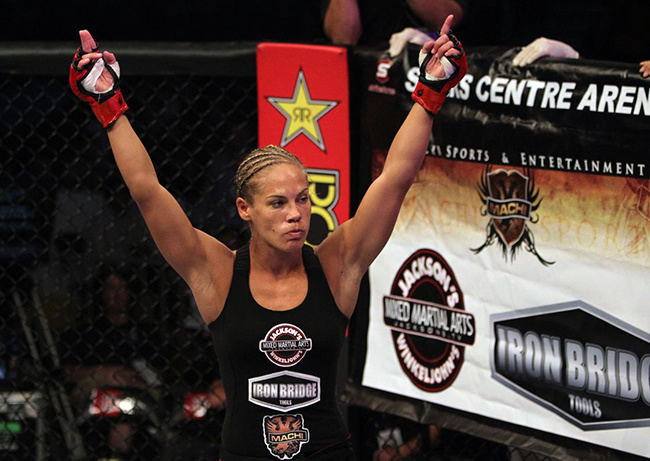 (Ed. Note: Last weekend, Julie Kedzie got word that she would be joining the UFC roster on the same day the promotion held its first-ever women's MMA fight. It's been a long time coming for the Indiana native, who started fighting back in 2004, when she was just 23 and women's MMA was barely in its infancy -- a freakshow for some, a horror for others, but a world of possibility for a few. We called up Kedzie to ask her what it was like when she heard she'd at long last made the UFC and what she had to go through to get there. She indulged us with a story about a gross run-in with former Italian Prime Minister Silvio Berlusconi -- as if there could be any other kind.)

Julie Kedzie: Watching Ronda Rousey and Liz Carmouche walk to the Octagon last weekend, I have to admit I got a little overly emotional. I started crying, which is embarrassing to say. But it was such a momentous thing: 20 years without female fights and now I'm seeing the first one. I sound like a sap, but I teared up. My friend next to me was like, "Dude, pull it together." And I was actually at that fight when I heard I would be entering the UFC. I was sitting, waiting for the fights, when my friend Melissa said, "Hey did you see the tweet?! It announced you're in!" So, it was an emotional night.

It's an amazing feeling and the UFC is really the best fight organization in the world, but I've also been in this sport for a long time and I've known in my heart that it's going to happen to me. Like, I've known since my first fight that I was going to be in the UFC someday. I just knew it. It was one of those things that came to fruition. This was supposed to happen for my life. And I had come a long way.

I was actually very fortunate for my first few fights because they were for the HOOKnSHOOT promotion run by Jeff Osborne in Evansville, Indiana, and that was one of the premier places for female fights. They actually believed in female fighters and thought it was a great thing. Jeff was the first person to put on an all-female show in the U.S. I was very lucky to be in the right place at the right time and to be recognized by him.

I won the HOOKnSHOOT three-fight tournament in 2005, and that was awesome! For me, I felt like that's what I was supposed to be doing.  Still, I was confused as all hell. I started as a 150-pound fighter because I didn't know how to cut weight; now I fight at 135. All these little lessons that you pick up along the way. The fans of that show were absolutely devoted. They came to every show. There was a lot of beer drinking, and even though you weren't supposed to smoke in the arena, there was always somebody smoking. I fought three times in one night, with 10-15 minutes between fights. I think I fought for 35 minutes that night. I remember all of these women fighters backstage, all of us sharing a dressing room and you're about to be fighting this person next to you in the dressing room. It was a riot, so funny. The finals went on with only about 10 people left in the audience. It was my final fight and after I won I got all giddy and excited. They handed me the microphone and I'm just babbling incoherently and there were maybe 10 people in the crowd staring at me. After the show, all the girls went out and I bought everybody drinks and we all partied all night together.

But I will say that some of the other shows that I fought weren't so good. I've had people pinch my ass on the way to the cage. Sometimes the male fighters were really supportive and sometimes they were horrible. I had one guy say, “I'm going to fuck you in your mouth.” Just horrible, horrible things said to me. People not paying you much, people disrespecting you, being moved in a card over and over again so that you're the last fight of the night and no one is there to watch. All sorts of things have happened like that to me, but I think that the struggle has helped me appreciate what I'm doing more. It makes me more in love with what I'm doing. Now that things are easier, I look at some of the female fighters who haven't had to deal with this because there's definitely more acceptance. I know that we still don't always get paid the same as the men, but it'll come in little steps. We've come so far in the last decade that I can kind of step back and really appreciate what I have now. It took, in the early days, real dedication to the actual sport and a love for fighting, not a necessarily a desire to be famous. Certainly, things are way better and fighters are more taken care of, but there was definitely a lot of crap you had to deal with in the early days.

I remember there were fight shows where people would vomit right on the mat you were supposed to fight on. I remember fighting one time in Chicago on a theater stage, and the mats were uneven in the cage. There was this step right in the middle of the cage.

When I fought in BoDog once, there were only the other fighters and their coaches there; there was no one else in the crowd. So thinking about fighting in front of a huge UFC crowd sounds crazy to me. Then again, there was the time I fought in BoDog for a huge crowd and Vladimir Putin was there.

This was the second time I was going to St. Petersburg to fight and it was the first time I was working with Greg Jackson. I’d been training with him for about three weeks, and I really wanted to impress him. We go to Russia. I fought Julia Berezikova, who's the Russian girl in Russia, so you kind of expect there's going to be some favoritism --- Russian judges, in Russia, at a Russian fight.

So I go back out there and I win the fight. Then after the fight they rush me onto a bus and I'm still in my gloves, I still have this bloody nose, and it's insane – I’m still in my fight clothes, and they rush me onto this bus and they ferry us to this high tea at a palace with Vladimir Putin and Silvio Berlosconi. Jean-Claude Van Damme is there, Fedor Emelianenko. Fedor's my favorite fighter! And I'm ripping my gloves off and I'm like, "God, I smell really bad. What is that smell?" So I run into the bathroom and I realized that I had shit my pants during the fight! I'm meeting Vladimir Putin! I'm with dignitaries, and there's silk damask and gold everywhere, and I'm sitting there in soiled pants! It's insane. And there's no trash cans. So I take my underwear off and I roll it up and I shove it in the corner of the bathroom and then I clean myself up as best as I can, and then I go out there and I'm taking pictures with Berlusconi and Putin, and there are armed guards and everything like that. It was insane! So my memory of fighting in front of dignitaries in this huge arena is that I had shit in my pants.

And Bersluconi hit on me anyway! He came up to me and was like, "Are you single or are you married?" That was one of the most surreal things of my life: this Italian prime minister hitting on me with poop on my pants.