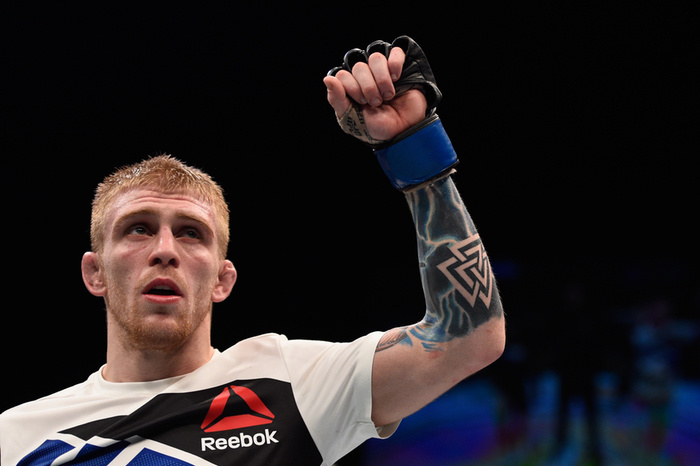 With all of the love that Stephen Thompson is getting in the MMA media and among fans it is nice to see that his old training partner, Justin Scoggins has made his way up to the main card of UFC 201. As a flyweight, Scoggins' place is usually on the undercard, only seen by those committed fans who religiously watch the prelims (the UFC wonders why it struggles to get fans invested in the division and in Demetrious Johnson's title defenses). But if you are reading this article there's a great chance that you already know something about that division and the heaps of talent which is coming along now that 125 pound men can actually make a living fighting in a cage. Justin Scoggins is hot stuff right now and this weekend he meets Ian McCall: a veteran of the division, of two fights with Demetrious Johnson, and of the very first bout for the UFC flyweight strap. For McCall, a win would be a rebound from a loss to John Lineker in January of 2015 and from injuries which have plagued him in recent years. For Scoggins, this is his chance to prove he belongs in the top end of the division.

Justin Scoggins shares many traits with Thompson. Both fight out of orthodox and southpaw stances but offer completely different weapons out of each. Though this isn't that unusual in itself—there isn't a man alive who can fight with identical efficiency with each weapon out of both stances even if he thinks he can. But Scoggins and Thompson have clearly approached their game with a deliberately asymmetrical philosophy. When the two fight out of a southpaw stance they fight side on, do most of their kicking with their lead leg, and look to turn with back kicks and wheel kicks. When they fight orthodox, both men fight from a wider stance allowing them to round kick more effectively with the back leg. Both men heavily favor their right leg from both stances. Similar to what Ray Leonard learned from studying Marvin Hagler—though he switched stances and threw combinations with both hands, it was always the right one which was more dangerous.

But while Thompson is more a striker who wrestles entirely as a defense to being taken down, Scoggins is a far more comfortable and aggressive wrestler. This allows Scoggins to pump out his lead leg side kicks far more often than Thompson who must always worry about it being knocked off course or picked up.

The lead leg side kick can be used to jam the advances of an opponent, as Thompson more commonly does and as Scoggins demonstrates below. This is referred to variously as a checking side kick, a defensive side kick or, if you are up on the point fighting tournament lingo: the 'D-side'.

The side kick can also be delivered offensively with the kicker stepping up to close the distance. There are a few neat ways to hide this in bouncing movement which are covered Fighting Karate. Notice how Scoggins almost turns his back even after successful kicks though. One of the reasons that you won't see too many MMA fighters just picking up the side kick to the body without having an extensive background in point fighting styles or American style kickboxing is that using it when takedowns are allowed it takes great judgement to pull off. That judgement can only really be learned with a great deal of practice.

We can't skip over the great Bill 'Superfoot' Wallace when talking about lead leg kicking from the old point fighting and American kickboxing styles. Wallace himself was a wrestler before he began training to compete in martial arts. An injury he had suffered to his right leg meant that he only felt capable of kicking with his lead leg. Rather than hurting himself further and putting in thousands of reps in an attempt to even up his kicking on his bad side, Wallace devoted the time to mastering his lead leg. Never one for spinning kicks or heavy, powerful kicks, Wallace employed speed and deception. I'll let the man himself describe his holy trinity of lead leg kicking.

The side kick, the hook kick, and the round kick. All out of the same chamber. The hook kick you will recall Stephen Thompson catching Jake Ellenberger with. Scoggins goes to it even more frequently. Josh Sampo found himself on the end of several.

The round kick is the really interesting part of the trinity though because the side on chamber means that the leg builds up none of the momentum that a traditional kickboxing or Muay Thai round kick would. So the round kick thrown from the side kick chamber is not a powerful kick but the leg weighs enough that a slapping blow to the head can be more than enough to stumble an opponent or knock him out.

Bill Wallace showing two side kicks to a high round kick in some vintage, gi-pants-only action.

The side kick / slapping round kick double attack made a brief appearance from Stephen Thompson against Johny Hendricks, and even from Ryan Hall (who had trained with Thompson) against Artem Lobov. Scoggins uses it every bit as well as Thompson.

Unlike almost every other distance fighter in MMA today—be they Taekwondo, karate or American kickboxing based—Scoggins uses his out fighting to set up his takedowns. By fighting so effectively at long range and avoiding returns, Scoggins can make the opponent more eager to chase him down and hit him with a telling strike. Or if Scoggins takes a break from the kicks and steps in to punch, the opponent will almost invariably swing back at him because he has come close enough. Any time the opponent is swinging, getting in on their hips is a great deal easier.

As a top player Scoggins is a low passer, attempting to stuff a butterfly hook and drive to half guard, then drive to mount from there. A passer in the Demian Maia/B.J. Penn design though obviously not nearly as skilled. One danger that Scoggins has run into time and time again is the threat of the guillotine. Shooting with his head low and bending deeply at the waist rather than level changing at the legs, Scoggins often gets caught in a guillotine position.

He will often try to drive straight into half guard anyway, but when an opponent has closed their guard on him with the guillotine grip he has scraped through by the skin of his teeth. When he fought a very smooth guillotine operator in John Moraga, Scoggins kept shooting in and leaving his head in the hole as Moraga snuck his hands through to consolidate his grip. At one point Scoggins even drove through to mount with his head still stuck under Moraga's arm and was immediately bumped back to guard and threatened with the submission.

Holding a guillotine once an opponent has passed guard is considered a rookie error, but you will also see better grapplers begin to set up their guillotines from disadvantageous positions just to have the hands in place as they escape back to a guard where they can actually apply pressure. Jeff Glover's guillotine from underneath Robson Moura is a brilliant example of this. In the second round Scoggins shot in on Moraga once more and this time found himself stuck in the guillotine in closed guard. Tripod as he might, he couldn't relieve the pressure and was forced to tap in his only stoppage loss.

Another thing about Scoggins' takedowns is that his level change itself isn't that fast. He normally just bends at the waist and gets in on his opponent's hips as they're punching. If his opponent isn't opening up and swinging at him, his takedown attempts can be stuffed fairly often and even countered with knee strikes.

A couple of other neat karate-isms from Scoggins game are his back kick and the occasional tobi-komi attack. Scoggins back kicks out of his southpaw stance and as we examined how ineffective Valentina Shevchenko's back kicks often are from this stance it might be a good idea to compare. Notice how Shevchenko, from her square stance, doesn't step across enough to line up her left hip with her target when she turns. Consequently, she misses a lot.

Scoggins is already side on when he decides to thrown the kick though and so is far more likely to line his left hip up with his opponent's left ribs. Also where Shevchenko never throws her back kick in combination, Scoggins always sets his up with high kicks and—while his jab isn't particularly accurate or dangerous—he will often throw out his lead hand in front of his opponent's eyes just to hide his footwork and the turning of his body.

Tobi-komi is an old school points karate strategy which was adapted from Kendo when karate became a sport in Tokyo. It essentially means raising the lead knee as you glide in behind it. In points karate it is often done so that the body is concealed behind the shin, knee and lead arm as you close the distance to punch or kick. In kickboxing it is more often down to convince the opponent that there is a push kick or side kick coming with the lead leg, but instead making distance in order to follow with a second kick. Simple stuff in theory but when you see it done really well by Saenchai or some other master of the striking craft it makes all the difference.

Notice how Sampo's hands go up as Scoggins glides forward while raising his lead leg, then the rear leg kick slots in nicely under Sampo's guard.

We examined point fighting a good deal in our article about the three fight rivalry between Raymond Daniels and Michael 'Venom' Page last week. If you are in to traditional martial arts striking styles or would like to know more about them it is probably worth checking that out. While Stephen Thompson, Raymond Daniels and Michael Page are probably the three point fighters / distance fighting traditional martial artists most recognized in this little revolution within the major combat sports it is worth remembering that there are also young guns like Justin Scoggins and his fellow flyweight contender, Kyoji Horiguchi. In fact, both now train at American Top Team. Oh to be a fly on the wall in that room for those sparring sessions.

But Scoggins has a real test at UFC 201 and we cannot forget that. Ian McCall has been down on his luck lately but he remains one of the best flyweights to ever play the game. Get back to Fightland later in the week and we'll examine some of McCall's best performances and methods.