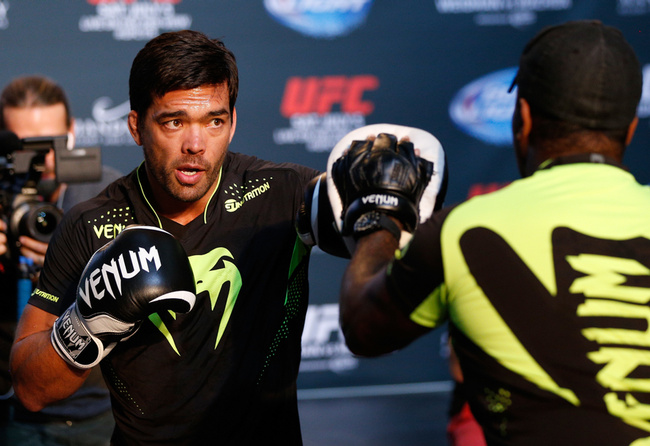 In the final moments of the documentary film Collision, the charismatic atheist speaker, Christopher Hitchens confesses to Douglas Wilson that if he had the chance to completely rid the world of belief, he wouldn't. He freely admits that he doesn't know why.

This is pretty much the way I feel about traditional martial arts purists. My honest opinion is that someone who wants to make themselves better should attempt to take what they feel is the best knowledge from every available source rather than limit themselves to one method. Indeed, that's how most fighting traditions were created anyway, bits and pieces from everywhere which, one generation later, suddenly become a rigid, unalterable system.

I feel, as Hitchens must have done, that I do not want everyone in the world subscribing to the philosophy of one style or one tradition, but I want someone preserving that tradition. 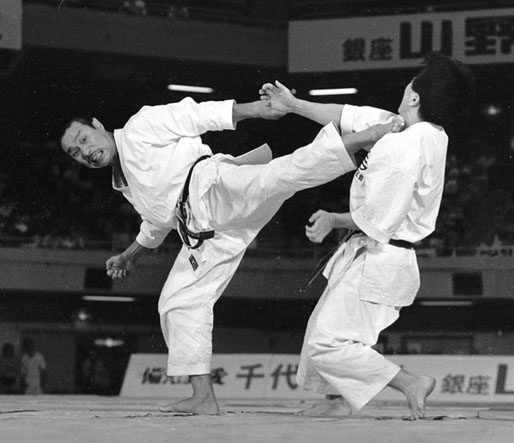 Training with Masahiko Tanaka was certainly one of my most memorable experiences in martial arts.

That preserving character can have all the zeal he wants. Ideally, he'd scoff at the idea of learning anything but what his one tradition had taught him—all the better to serve as a time capsule.

That being said, the world of combat sports is colored by the first martial art you learn. Just as you can learn many languages, but you're going to learn them all through the medium of the first one. Today, I want to talk about the three most accomplished karateka of all time, who took on the best in the world in other disciplines, but kept some quirks from their past. Lyoto Machida, Andy Hug, and Semmy Schilt.

Each man represents one aspect of karate, but more than that, they represent a spectrum of aggression. We will begin with easily the most offensive karateka you'll find.

Affectionately know as the Blue Eyed Samurai in Japan (especially impressive as he had brown eyes), Hug was one of the most flamboyant fighters in any martial art. From the Freddie Mercury moustache, to the axe kicks he threw so frequently in the ring. Hug came from a background in Kyokushin karate, and because of the rules there (kicks to the head allowed, punches not, so matches take place almost chest to chest, attempting to throw up kicks) he became one of the most dexterous power kickers in history.

Hug passed away from leukaemia in 2001, riding a four fight winning streak including Cro Cop and Glaube Feitosa. Dying just weeks after his last fight, it's likely that Hug was far from his best through his final fights. If you feel like crying today, take a look at how his friend and rival, Peter Aerts reacted to Hug's death.

Hug's axe kick was easily his most fear weapon, and he could throw it off of either leg, out of either stance, coming up on the inside or the outside. The axe kick exploits the obvious flaw in the guard of any fighter—you can't use any regular kind of guard to avoid strikes from above. It was made worse by the fact that Hug would disguise his axe kicks as his punishing low kicks. If you picked your leg up to check it, you pretty much only had the hope that he'd miss the axe kick while you were rooted in place.

Hug was also a master of the wheel kick. Knocking out two opponents with wheel kicks to the head, Hug preferred to use the wheel kick as an attrition tactic, into lead leg of his opponent.

But all of this extravagance served to open the opponent up to orthodox attacks. His axe kicks forced opponents to raise their arms, at which point he'd hit a simple round kick to the liver—as he did to finish Duke Roufus and Patrick Smith. Furthermore, Hug, despite his awful boxing, was able to finish Ray Sefo and Stan Longinidis with punches, simply because he had the tools to make top level fighters worry. You might have faced dozens of men who want to punch you in the face, but what about guys who will drop their heel on your collarbone?

With fighters opening up more and more on the feet in mixed martial arts, we may one day start to see effective axe kicks. But to this day I have never seen anyone even close to Andy Hug levels of dangerous with them.

More about Hug and his incredible axe kick here.

Semmy Schilt: The Power of the Snap Kick

Semmy Schilt is probably the most accomplished heavyweight kickboxer of all time. Four K-1 Grand Prix titles and a Glory tournament title is simply a unmatched record. Schilt, an Ashihara karate fighter, was a phenomenal tournament fighter for one simple reason: he fought his own fight.

Schilt brought questions, not answers. He did not change to suit his opponent, he made his opponents change to beat him. And it all began with that beautiful, brutal maegeri.

Mae-geri is karate's front kick. In truth it is maegeri-keage, a front snap kick. Rather than raising the knee high and driving in, as with a push kick, the heel is raised and the knee is swung upwards, then the kick unhinges and the ball of the foot slams upwards into the target.

Where Hug was a master of offense, creating openings with his spectacular combinations and kicks, Schilt was a man whose offense was all about denying a return. And that is what using your reach is really all about. In boxing you get behind a long, stiff jab. In kickboxing, Schilt got behind his front leg snap kick, normally with a step up with the right foot.

But Schilt expanded from this front kick. The kick itself was a part of a triple attack, three attacks which look similar on launch but all target different areas. There was the straight snap kick, the round kick, and the sankaku-geri—the 'triangle kick' which comes up at a diagonal which Robbie Lawler used in his second bout against Johny Hendricks. Schilt switched between all three, circumventing guards and kicking heads when he was permitted.

But building off of the front kick, Schilts lead knee served as a barrier between him and opponents—he was famously at his worst when opponents got up in his face. When he felt an opponent pushing in as he retracted the kick, he'd go to his stiff jab. His opponents often got so frustrated by Schilt's snap kick that they'd dive in after it with little regard for their safety—and Schilt would drop them as they ran onto his fist.

If they got in too close and they hadn't managed to hit him, Schilt would palm their left hand down with his right, slap his left hand down behind their head and step off to the side to land a brutal knee strike. In Ashihara karate this control is called mawashi-uke, wrap around block, which is a little different from the traditional movement of mawashi-uke.

Schilt was a methodical, long range sharp shooter. In fact, if you remarked on anything about him, it would be his accuracy, which for a man attempting to co-ordinate such an enormous frame was sublime. While Schilt picked away with the snap kick—a brilliant strategy that we're just now seeing come into vogue in MMA—he would occasionally show something slicker. His 1-2-back kick as he moved Mark Hunt to the ropes was a thing of beauty. This was not the standard ambling giant, but a skilled striker who understood his physical gifts.

And he wouldn't object to wheel kicking a guy if he felt like it.

The front snap kick off of the lead leg is by no means only a big man's technique either. Katsunori Kikuno's early career (the good part) was built around this kick and it's winding effects.

At the other end of that spectrum of offence sits Lyoto Machida. And for good reason. Where Schilt and Hug were full contact karateka before crossing over to kickboxing, Machida came from a point fighting background. Point fighting teaches a competitor to avoid strikes like the plague and only close the distance on their own terms. When you bring an accomplished point fighter in to train full contact, that skill shouldn't leave them too easily.

Machida's skill is in denying a target. He establishes a distance which is greater than the norm, because every attack you can think of will fail if the target moves out of range. Almost every single fighter that Machida has faced, including middleweight champion, Chris Weidman and light heavyweight champion, Jon Jones, has at some point moved in to catch Machida and run onto a counter strike.

Not all of them straight up bum-rushed Machida, as Ryan Bader did, but all of them walked onto stiff collisions. And that is what Machida demonstrates from a point fighting background—leading, when anything the opponent lands, regardless of power, can win them the fight, is very dangerous. Drawing the attack, taking yourself slightly off-line, and meeting them is a far superior strategy.

If you draw and intercept a fighter, you can basically do whatever you want. You can try to starch them with a straight punch.

Wind them with that beautiful Machida-style intercepting knee.

Or even get in under their arm pit and hit a wedge throw.

Machida has significant flaws in his boxing form, but it doesn't matter because he is so rarely in boxing range. They say of Shotokan karate that it has the longest range of any martial art which doesn't use weapons, and watching Machida you can certainly see that.

For more on Machida's many feints, baits, and sweeps, check out any of the numerous articles I've written about him.

So in the three most accomplished karateka of all time, you can see three completely different styles. Each completely unique and demonstrating principles which could be invaluable to the average martial artist or the young fighter. There are so, so many more strategies and methods which have come out of the various styles of competitive karate, and from traditional karate forms passed down, in fact I wrote a whole book on them.

Lyoto Machida fights C.B. Dolloway on Saturday night at the last UFC show of the year. Any chance to watch the last of these three men still actively competing is a blessing, and I highly recommend that you don't miss it.