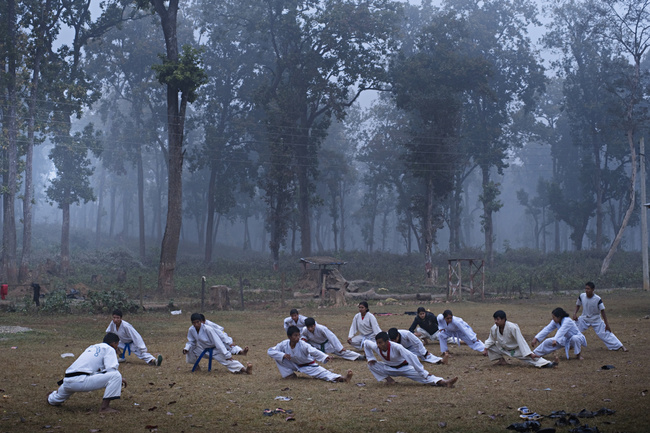 One of the most important transmissions of knowledge in martial arts history took place in the Ryukyu Kingdom, present-day Okinawa, when wandering martial artists from China made the crossing from Fujian, and brought with them the seeds of the Bubishi, karate’s bible.

The Bubishi is a collection of essays that deal with philosophical ideals tied to the martial arts, metaphysics, medicine, training methods and techniques, as well as a bit of history. Although considered one complete work, it is very similar to other “bibles” in that there is no one author, much of it was cobbled together from other sources over time, and it is considered a sacred treasure by those who hold it most dear: the karate masters of Okinawa who influenced generations of Japanese, Korean, and Western martial artists.

The Bubishi is Chinese in origin and is written 武备志, which basically means “Martial Manual”. In Patrick McCarthy’s seminal work, “The Bible of Karate: Bubishi,” the manual is translated and presented with notes and an introduction that explores the many modes of transmission that could have brought the text to Okinawa.

At this point, it might make sense to take a step back and recognize the incredible breadth of knowledge within China at the time. The Bubishi, karate’s most important text, is a patchwork of 32 essays taken from several sources, delving into a few martial styles (White Crane and Monk’s Fist) and was most likely compiled and transmitted by exiles in Fujian, one of the southernmost provinces of a sprawling empire that reached to Russia in the North, Malaysia in the south, and Afghanistan in the west.

To put it into context, another martial tome, also called the Bubishi, was put together at roughly the same time by a Chinese general named Mao Yuanyi. His manual cites over 2,000 books, contains 240 chapters over nine volumes, and touches on every imaginable aspect of warfare - unarmed, armed, armies, skirmishes, descriptions of kung fu techniques taken from an even earlier document written by a master named Qi Jiguan, who nobody has heard of outside of scholarly circles...

The Okinawan Bubishi that forms the basis for modern karate is basically one drop of blood, one collection in an ocean of Chinese martial writings that managed to make it’s way out, and spark a revolution across East Asia, and eventually the world.

China and Okinawa have a long history together, dating back to the early 14th century, just before the establishment of what would become the Ryukyu Kingdom. Imperial emissaries from China would pass through the islands from time to time, fishermen and traders would make the trip back and forth, and Okinawan scions were sent to the Chinese Mainland to receive a proper education. Martial knowledge could have been passed along at any time during those centuries, but for us, the most critical time period is just after the fall of Ming dynasty (1644), when loyalists fled the burning ruins of the Shaolin Temple, and scattered across the newly formed Qing Empire.

According to the many legends bouncing around dojos across the world, one of these fleeing exiles was a kung fu master named Fang Zhonggong, who made his way to Fujian, on the southern coast of China. Fujian faces Taiwan and Okinawa, and has long been the jump off point for adventurous Chinese, as well as something of a haven for defeated rebels. Martial artists from the Shaolin Temple, like Fang, gathered here and created a community that would eventually give rise to the Southern Shaolin Temple, Wing Chun and, important to our story, White Crane style kung fu.

As one version has it, Fang Zhonggong was killed by bandits and his daughter, Fang Qiniang, took up her father’s martial banner, and swore revenge. While plotting, she saw two cranes fighting by the riverside. Entranced with their movements, she had an epiphany and mixed her father’s Shaolin kung fu (itself a mixture of Five Ancestors, Monk’s Fist, Tiger Fist and who knows what else) with the techniques she learned from the cranes, and White Crane kung fu was born.

In a sidenote, this story is remarkably similar to the Wing Chun creation story, and it’s interesting that the Fang family lived in Yongchun Village - Wing Chun is just the old phonetic spelling for Yongchun (永春) which means “eternal spring.”

White Crane kung fu split into a dozen component parts, Whooping Crane, Jumping Crane and several others, and spread out across Fujian and into the seas between China and Okinawa. McCarthy’s book lists ten different theories as to how White Crane kung fu, and the Bubishi manual associated with the style, made the trip across the straits and ended up in the hands of the Okinawan masters. The Okinawans then mixed the Chinese styles (and their interpretation of the Bubishi manual) with their own highly developed indigenous martial arts, and created proto-karate.

Some transmission theories are mundane: a young Okinawan scholar travels around China, picks up the book from a master, brings it back; and some are positively kung fu-esque: a wandering kung fu master named Ryuru Ko (which, in Chinese characters, could mean “wandering brother”) washes up on shore, teaches a version of White Crane, and passes on the sacred text. There were also many Chinese families in Okinawa at the time (36, according to legend) and they also practiced martial arts. That community may also have passed on bits and pieces of what eventually became the Bubishi.

However the transmission happened, the result was an entirely new martial art, based upon Chinese traditions, but already morphing into a unique style when the Meiji Restoration put a militaristic regime in place in Japan, and Okinawa (already occupied for centuries by Japanese forces) became an official part of the Japanese Empire. 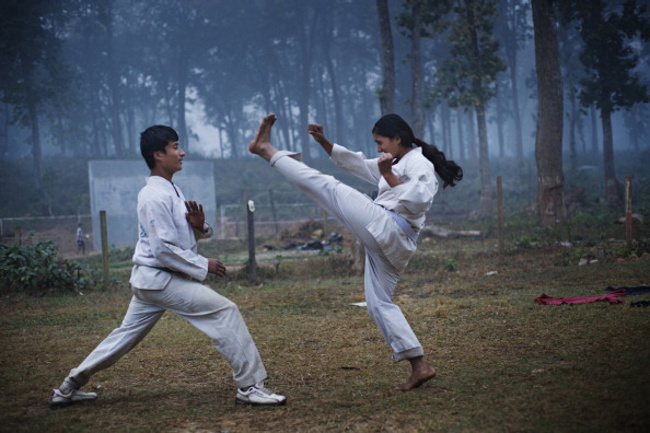 The Japanese had already developed kendo and judo (Way of the Sword, Way of the Hand) and for them the Chinese-Okinawan hybrid karate-jutsu, as it was often referred to, need to be made Japanese. The original characters for the martial art were 唐手道 which means “martial art of the Tang,” with Tang being a reference to the Tang dynasty, at the time a common way to refer to Chinese. Chinese still refer to Chinatowns as 唐人街, which means “streets of the Tang”. The character is pronounced “kara” in Japanese, but the Meiji officials decided to bring this hybrid into the fold and change the character from 唐 to 空, the latter is also pronounced “kara” but means “empty,” and therefore removes the Chinese reference (and ownership) and further morphs this martial style into something new.

A quick recap: Shaolin exiles bring their kung fu to Fujian; one of them sees cranes fight and develops White Crane; contact between China and Ryukyu result in the transmission of White Crane and the Bubishi, karate-jutsu is born; Japan sees the value in this Chinese-influenced island fighting style, and co-opt it into their own martial tradition, calling it karate-do.

But it doesn’t stop there.

When post-WWII Korean martial artists were seeking to organize their own martial style into a coherent system, they looked to Okinawa and the Bubishi. The karate forms from the islands became a foundation for what would eventually become Taekwondo, another martial art that has swept the world, and has seeped into the mixed martial arts kicking game - high kicks, front kicks, spinning back kicks, side kicks ... much of the improved kicking techniques we are seeing more and more MMA competitors use in the Octagon comes from a study of (and an adaptation of) Taekwondo. But that is another story for another time.

There is little resemblance between the Shaolin Five Ancestors kung fu and modern karate, let alone modern Taekwondo. At every step of the way, starting with the initial flight from the burning temple in 1644, the martial art has changed, and been adapted to the environment, the people, and the times. At the center of this constantly evolving tradition is a bible, the Bubishi, one of the sole constants over the centuries, yet itself an enigma cobbled together from old sources, copied down by uncomprehending disciples, interpreted differently by every master who manages to read its pages.

It’s interesting to note that the Bubishi spends significantly more time discussing metaphysics, medicine, and correct behavior than it does specific fighting techniques. But that too is another story, for another time.