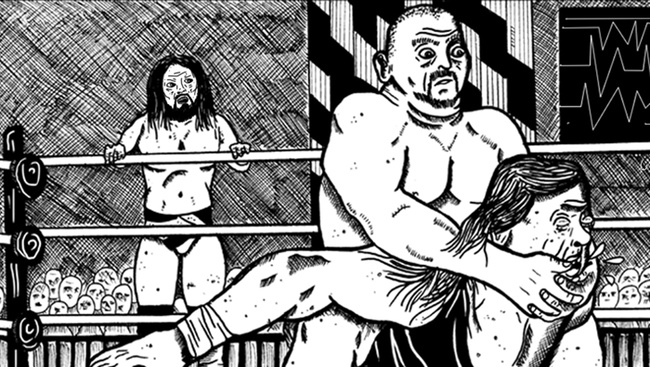 Mixed martial arts owes a tremendous debt to professional wrestling, greater than many MMA fans would like to admit. Karl Gotch's student, Antonio Inoki took high profile style-versus-style fights in the 1970s, one of which he managed to rope the world champion, Muhammad Ali into. The impressive shoot match between Inoki's protégés Masakatsu Funaki and Minoru Suzuki saw the two men found Pancrase, the organization which produced many of the best rounded early mixed martial artists including Frank and Ken Shamrock, Bas Rutten, Guy Mezger and Matt Hume. And the talents of Kazushi Sakuraba and Josh Barnett are steeped in the professional wrestling tradition. As Sakuraba, who defeated four members of the Gracie clan when they were still fighting's first family said it best, “In fact, professional wrestling is strong”.

While professional wrestling helped to build mixed martial arts it has also served as a time capsule to preserve many of the techniques of old school catch wrestling. Catch wrestling, shortened from 'catch-as-catch-can' was a form of wrestling that flourished in the north of England and in the carnivals of the United States through the first half of the twentieth century. Catch-as-catch-can permitted holds below the waist and the use of what Farmer Burns termed 'punishment holds', submissions as we would know them today. Glimmers of the catch wrestling of old are not so much found in the powerbombs and frog splashes of modern professional wrestling, but in the chain wrestling and holds of the old style workers. A tradition that was carried on by the students of Stu Hart and great technical wrestlers like Dean Malenko.

The methods of catch-as-catch-can were cruder than those of modern grappling and the rules of the game made it significantly different to the no-gi bouts of today. As catch wrestling was still wrestling, the pin was still of primary importance. This prevented wrestlers from developing the skill and comfort off of their backs that you see in grappling today. It also meant that the defensive wrestler was always trying to get to his hands and knees—bringing his elbows away from his body and exposing him more readily to hammerlocks and half nelsons. But difficulty applying a technique in today's position driven grappling game does not mean that the principles of the technique are not sound.

The hammerlock, for instance, was a staple of old timey wrestling and appears frequently in the chain wrestling portions of professional wrestling matches. The principle is simple, the arm of the opponent is taken up his back and it does all kinds of nasty stuff to the delicate muscles of his shoulder joint. In pro wrestling it is achieved, strained with a wince, and then released and the match goes on. You will also remember it from old cop films, being performed against a wall. 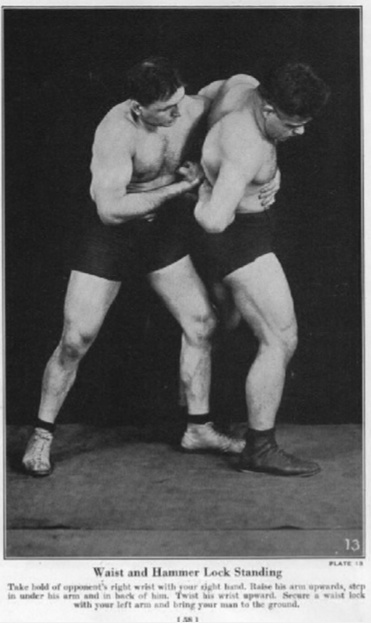 Notice that in this application from A Hand Book of Wrestling by Hugh Leonard, the opponent's arm is opened from the referee's position with the head.

The difficulty in achieving it in actual grappling is in getting the opponent's arm away from his own body. Guys don't go to referee's position, up on their arms any more. The most famous example of the hammerlock being applied in MMA came from Shinya Aoki. Aoki was able to hit the hammerlock against a competent grappler in the same way that Brazilian jiu jitsu legend, Mario Sperry used to—gaining control of his opponent's arm while still in their guard and when they were still actively using it rather than being concerned with keeping it tight to their body.

Having passed Mizuto Hirota's arm behind his back, Aoki passed guard and mounted. Then began punching Hirota in the head on the side of his trapped arm. Hirota was forced to roll to his side, bringing his back off of the mat and allowing Aoki to begin applying the hammerlock.

Hirota scrambled to escape but Aoki continued to force Hirota's arm until there was a loud snap and Aoki was waved off by the referee.

Another key element of chain wrestling exchanges is the head scissors. It is relatively innocuous in professional wrestling, no match is ever going to turn on it, but the crooked head scissors is a legitimate and powerful submission hold. When a young Minoru Suzuki was tearing through his first few opponents in Pancrase, he threatened to mess up Vernon White's neck with the technique, forcing the submission.

Even the legendary Camel Clutch, supposedly invented by Gory Guerrero in the 1940s, has been around much longer. Understandable really because of the simplicity of the technique. The camel clutch is a two pronged attack which simultaneously attacks the bottom man's neck and spine in a cervical lock and makes him humble. One of the more interesting developments in grappling over the years is that the attitudes to chokes and neck cranks have reversed. To apply a choke was considered foul play in the vast majority of historical wrestling contests, while cranking of the neck was often considered fair game. In most grappling gyms today the reverse is true.

Here is an illustration of Paulus Kal demonstrating the legendary clutch on ye olde jabroni from 1470.

This move was adapted by the Iron Sheik. Here's his famously stiff application of the hold against Hulk Hogan:

Of course the technique is hard to find in an age where most grapplers will avoid being flattened out on their fronts with the opponent on their back at all costs, and where choking is completely legal. Eddie Bravo still likes it though:

And that is the overwhelming theme with the classics of professional wrestling, there is a legitimate hold there it would just be exceptionally difficult to apply on a knowledgeable and experienced grappler. The Boston Crab appears in old judo and jujutsu texts but it is hard to treat with a straight face, until you see the results of one Brazilian Jiu Jitsu competitor not releasing his guard as his opponent steps over and drops his weight. It's simultaneously horrific and one of the most dangerous things I've ever seen someone attempt in the name of sport.

Pro wrestling continues to serve its purpose as a soap opera for dudes, but there is still something gratifying about watching the men who have some small part of that old time skill run through the holds against each other. Because as impressive as hoisting five hundred pounders on your shoulders or cutting terrific promos is, they don't really compare to flowing, thoughtful, original in ring action in the mold of what professional wrestling was created to be: play fighting with real holds.