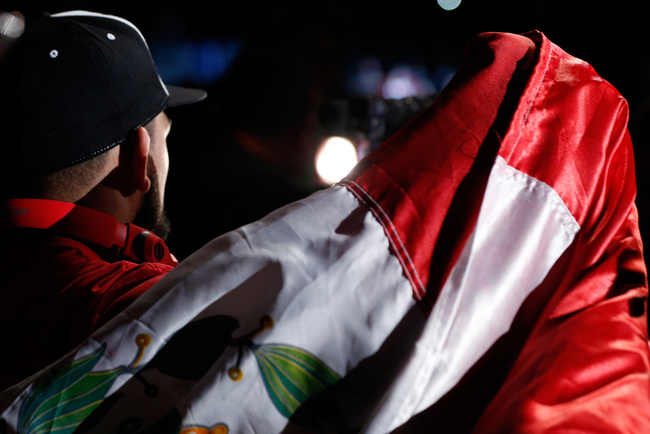 When UFC welterweight Kelvin Gastelum first stepped foot inside the Octagon for a 2013 exhibition match on The Ultimate Fighter, no one thought much of the Yuma, Arizona product. Heck, even after he stepped out of the cage, winning a preliminary bout to gain entry onto the reality television show, coaches and critics were still not convinced that he had much of a future in the UFC.

But now, just two years later, Gastelum, who eventually went on to win the TUF 17 tournament, finds himself near the top of the heap in the 170-pound division, and with a win over Tyron Woodley in the UFC 183 co-main event, he may even be closing in on a title shot.

“In my mind I knew eventually this is what I wanted to do, I just never thought it would come very, very soon and at a very heavy dose,” explains Gastelum, 23, who has just finished his final day of sparring at San Diego’s Alliance MMA. “Everything is happening so quick, but I’ve been able to pull through it and achieve what I’ve been wanting for a long time, which is fighting in the UFC and to be one of the best in the world.”

Like so many of his combat colleagues, Gastelum’s rise from amateur wrestler to world-class MMA competitor began in a small town, where Octagon dreams and fight-night fantasies were a grand source of inspiration, but never reality. 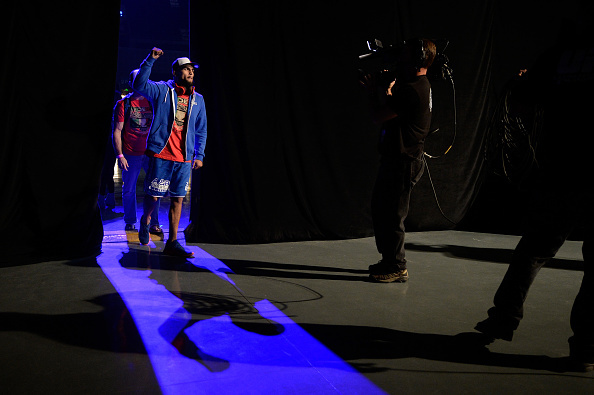 Honing his ground skills at Yuma’s 10th Planet Jiu Jitsu, Gastelum supported his MMA habit by working as a bail bondsman, a job that may have just prepared him for the pressures and bright lights of big-time fights.

“We had guns drawn, and we came up on them at a gas station,” recalls Gastelum of his bounty hunting days. “It was these two brothers and it was a high-profile bond… one of the brother’s girlfriends was able to help us out and kind of let us know where they were at, and we were able to raid them… about three cars and eight guys of ours with guns drawn—it kind of felt like a drug bust almost—we rolled up on them, told them get on the ground, handcuffed them, and put them under arrest.”

It was around this time that Gastelum began moonlighting inside the ring and cage, taking fights at regional shows wherever he could find an opponent. A former high school state wrestling champion in Arizona, Gastelum felt he always understood what it would take to succeed in professional combat sports.

But not even his days as a bondsman or years of suiting up in his singlet could prepare him for his first pro fight. For that, Gastelum would have to travel some 60 miles west, from his hometown to Mexicali, a fitting location, as his mother first immigrated to the U.S. from Mexico while still pregnant with Kelvin.

“When I first fought in Mexicali [the fans] were throwing beer bottles, they were throwing trash in the ring and just talking crap to fighters; it wasn’t pretty,” explains Gastelum. “They get real riled up, they get very passionate about the fight, about the sport.”

Avoiding the litter and debris and shrapnel, Gastelum would go on to win his first two bouts in Mexicali, both via stoppage (one submission, one TKO). He would then collect three more professional victories, along with three TUF exhibitions, before defeating Uriah Hall in the TUF 17 finale, the fight that earned him a six-figure UFC contract. And nearly four years after making his debut, Gastelum would have the opportunity to return to the Mexico, where squared off against the highly ranked Jake Ellenberger at UFC 180.

Entering as the underdog, Gastelum traded shots with Ellenberger for the better part of the first round, each fighter landing punches. Gastelum would score the bout’s first takedown, but Ellenberger quickly stood back up and landed a takedown of his own. Then, just as Ellenberger appeared to be taking control of the match, Gastelum popped back up and secured his opponent’s back. In a flash he forced his right forearm under Ellenberger’s neck, using his left arm to tighten the choke. And just 4:46 into the first round, Kelvin Gastelum scored the biggest victory of his young MMA career.

It was at exactly this moment when he was elevated from up-and-comer to legit contender status. And while the MMA world was finally taking notice of his vast improvements, Gastelum focused his attention on the growth of Mexican mixed martial arts fans.

“There was a huge difference … the sport has grown so much and matured so much in the last couple years … I actually expected the fans to be a little more riled up,” offers Gastelum. “I thought it was gonna be a little more crazy, but you know … I was pretty happy with how the crowd reacted.”

Building on the momentum from his victory over Ellenberger, Gastelum returned to San Diego to train under head coach Eric Del Fierro and alongside teammates Dominick Cruz, Michael Chandler, and power wrestler Paul Bradley. He attributes a large part of his meteoric rise to the attention, care, and direction he’s received at Alliance MMA, the camp he joined just prior to the Ellenberger bout. 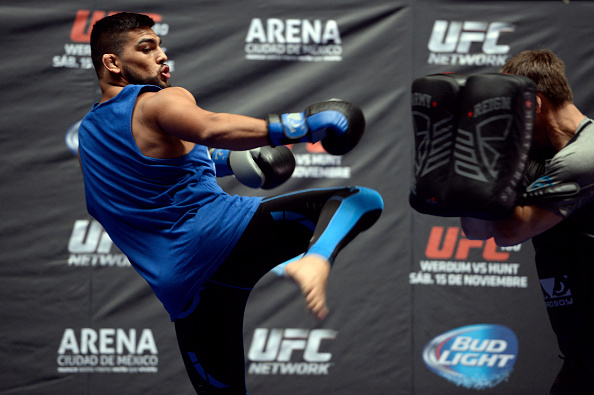 Concentrating on his boxing and footwork, Gastelum has also learned a great deal about his own physiology of late, a necessary lesson, as he previously found difficulty cutting weight leading up to his fights. Not only did Gastelum barely make the 171-pound limit for his bout against Rick Story at UFC 171, needing an additional hour and a second attempt to hit the contracted weight, but he also failed, outright, at his next weigh-in, coming in at 172.5 for a June 2014 contest against Nico Musoke.

There was chattering that Gastelum and famed dietician Mike Dolce were on the outs and that managers were interfering with his progress. But all of that appears to be behind Gastelum at this point, although cutting down to 170 pounds for the former middleweight is still a challenge.

“I know I’ve grown a lot, not only as a fighter, but also as a person … Eric Del Fierro [has] taken a real good interest in me and guided me and really helped me grow. It’s pretty awesome to have those kinds of people training me and guiding me and helping me grow,” adds Gastelum. “I’m still very new to the weight-cutting, to the dieting, so I’ve just had to learn the hard way and kind of grow as I go, each and every fight I just learn about myself, about my body and the way it works.”

And with his training and dieting regiment now stable and steady at one of the country’s top gyms, Gastelum is fully focused on the biggest test of his career, a date with number-three ranked Tyron Woodley, a former Division-I wrestler at the University of Missouri with loads of power in his hands. 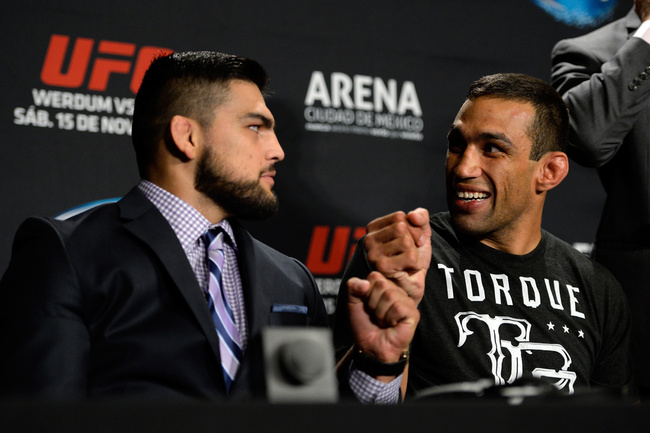 Woodley represents a new step in Gastelum’s career; he’s a top-five fighter who has been closing in on a title shot for the better part of a year. But stylistically, Woodley presents many of the same challenges as Ellenberger did previously, combining high-level wrestling with knockout power and finishing ability.

“He’s very athletic, very explosive, very strong as you can see. But you know, I believe in my own right, I’m just as fast and as explosive as he is, and I think I'm gonna match up pretty well and it’s gonna surprise a lot of people,” comments Gastelum. “I believe I’m the better fighter anywhere the fight goes, but especially in the conditioning aspect. I think I put a certain kind of pressure that I don’t think he can handle. So once I put my hands on him, he’s not gonna know how to deal with that kind of pressure, and, I see him gassing, I see him breaking toward the later rounds of the fight.”

These bold predictions are another new facet of Gastelum’s game. Once quiet and reserved, he’s talking himself up, and even UFC President Dana White has taken notice, mentioning that with a win over Woodley, Gastelum could earn the next welterweight title shot, as the division has become cluttered of late, with contenders Rory MacDonald, Johny Hendricks, Matt Brown, and Hector Lombard all vying for a crack at current champion Robbie Lawler.

And for the record, Gastelum is forthright about his desire to take on the champ. According to him, it’s a fight he’s wanted for quite some time.

“I’ve got my eye on everybody coming up … and I feel like I can match up pretty well against everybody,” explains Gastelum. “I think one guy in particular I’m keeping my eye on is Robbie Lawler. Even before he won the title I’ve been keeping my eye on him, and I think he and I would make a great fight.”

But, for now, Kelvin Gastelum is enjoying his ascension up the UFC ladder, knowing that he’s come a long way since his days of hunting bail jumpers around the small town of Yuma.

“I’ve been able to do some cool things so far, I’ve been able to climb up the ranks pretty fast,” states Gastelum. “Considering I am younger than a lot of those guys, I have a lot of room for growth and I’m learning every day.”

The Welterweight Game of Thrones