Keta Meggett: WMMA on the Come Up 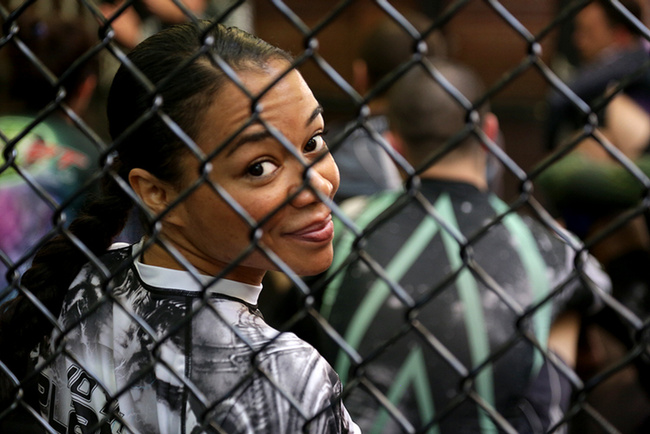 I met Keta Meggett, who was working as a model, about six years ago. Over the years I’ve watched her start a budding career as an actress and a professional wrestler. Recently I noticed she had started practicing jiu jitsu and Muay Thai regularly, and suddenly it seemed like all she was doing was training.

In the past year, Keta has taken a few mixed martial arts bouts while continuing to pursue all of her other endeavors, which include creating and running a non profit called TeamBullyBuster.org.

I caught up with her at 10th Planet Jiu Jitsu Academy in Los Angeles this week, to talk about her experience as an up-and-coming WMMA fighter. 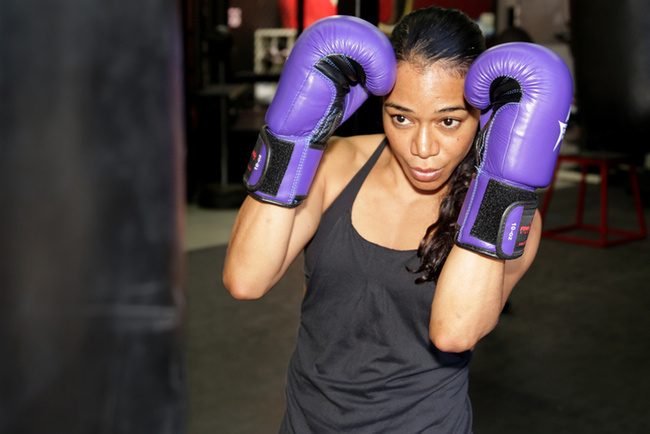 Fightland: You’ve been training in a variety of styles for a while now. So what do you think about the WMMA scene in general?
Keta Megget: I’m excited about it, simply because it’s dope to see a woman in power be able to protect herself. I feel like it’s a platform and opening doors for so many other things. It’s really cool, I’m really proud of it, and it’s just cool to see women on the come up.

Who’s your favorite female fighter?
I mean, hmmmm... (laughs). Ronda Rousey! I mean it’s kind of cliché but she’s an Olympian, she’s on a whole other level. She’s not normal.

Do you think the popularity of WMMA is pushing women’s sports and gender equality forward?
Totally. WMMA is propelling women forward [in lots of ways]. Typically you think of fighters as men but now there’s a whole other element. For the UFC to even add women to the cards and the [all female]TUF show and all of that is awesome. I think now women’s fights are some of the most watched UFC fights.

Yea that Zingano versus Nunes fight was awesome.
Dude, it was incredible. 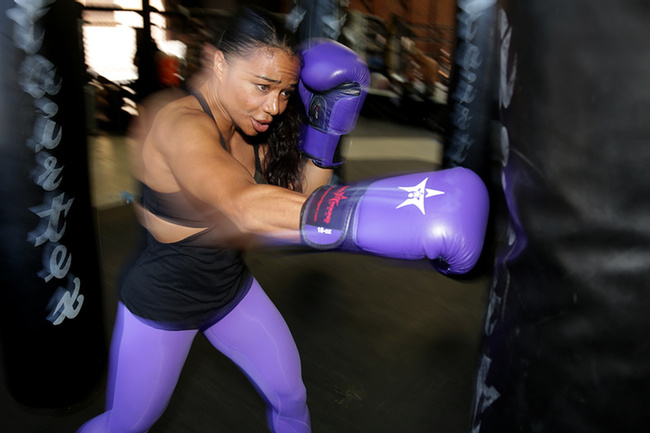 You frequent a few different fight gyms, what is it like to be a the ‘new girl’ in the gym?
Nothing. Easy. I grew up in the gym. I’ve always been an athlete. For gymnastics, for basketball, for track I was always in the gym so for me it’s normal. I’m not a gym rat, I don’t go around hugging people, I go in, I handle business and I leave. I don’t think sex makes a difference.

How did you get into MMA in the first place?
Ok, originally I got cast on WOW Super Heroes, which is a wrestling show, kind of like the new WWE Divas. It’s an all female cast and we are all superheroes. The producers liked what I was doing in my personal life with Team Bully Buster so they incorporated it into my character making my character ‘The Bully Buster’. It should air on TV next season.

So I got cast on WOW just for being athletic and whatever and I really liked the action. It was something that brought me out of my shell because I suffered from Post Traumatic Stress Disorder so I was really weird about people touching me or even being near me. 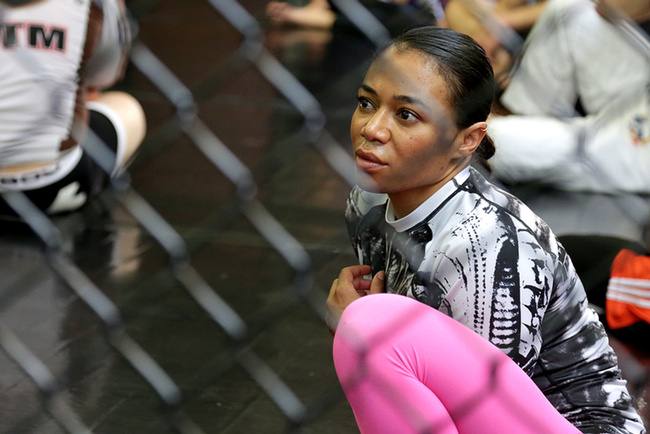 Can we talk a little bit about that?
My first year in high school I got bullied really bad for being light skin with long hair by eight black girls. It lasted about a year and near the end of the year they ended up completely pulverizing me; they broke my jaw, my shoulder blade, my ribs, punctured my pancreas and my liver. I was in the hospital for a week and I never went back to that school that year. I transferred to a different district but still had all sorts of issues where I hated school, students, people and everybody.

[Being physcially close to others was] something that freaked me out ever since I got beat up. Wrestling really broke that [fear] since clearly you’re all over each other. But I really liked WOW. I liked the story lines, I liked that it was uplifting and empowering for women, and it wasn’t like the more typical female wrestling (which is more T&A based).

So that started my interest but really it just opened more doors for other auditions as an actress. Then I booked a Gatorade commercial where I was boxing, and I didn’t even know how to wrap my hands, so I took a couple privates so I could fake the funk a little better. And I liked it.

Then I booked a commercial where I had to grapple and I absolutely loved that. I started at 10th Planet and kept going with it and one thing lead to another and I started practicing Muay Thai and I’m just in love with that type of physicality. Then you mix them together and you got MMA. 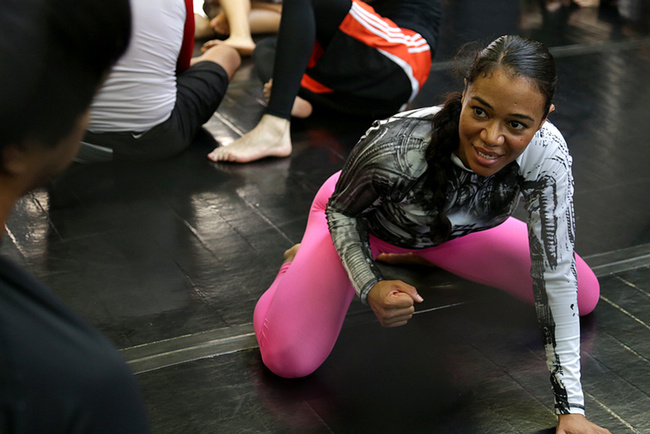 How did that lead to what you are doing now with anti-bullying?
Well I never really talked much about the incident much at all. Then later down the road I was talking with a director trying to figure out my character and how to get into it. Things got pretty deep and the whole story came out. He told me I had such a great personality and presence that I should do something with that experience. I thought about it and realized he had a point so I brainstormed and came up with Team Bully Buster.

Team Bully Buster is a non-profit organization, which I’m the founder of. We visit schools, we tour the country shedding awareness and giving students and teachers the tools to stop bullying, not just saying bullying is bad and bullies are bad, it’s way deeper. Along with that I interview celebrities and athletes about how they overcame bullying. 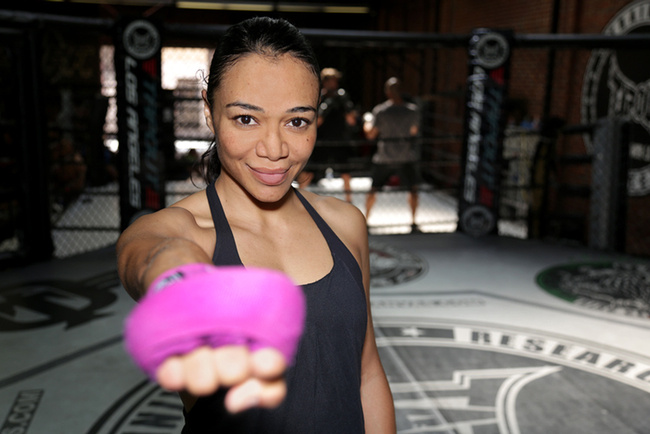 Ok, last question. A lot of people get interested in MMA but here you are a few years later still doing it, still training, still learning, and you’ve even taken a few amateur fights. So what keeps you motivated to keep pushing yourself in MMA?
You know, being an actress you get a rush when you are performing. I just finished a play and the playhouse had 1,000 people in it and at the end hearing people applauding or even during the performance people reacting to what your doing just gives me a rush. I can’t really explain it, like it starts at your toes and runs up to your head and through your fingertips.

Well I get that same rush with fighting; it’s just the most driving force. An acting career you can’t really control, it’s up to a casting director or director to choose. I mean you can stay prepared and be ready for a role but even if you get it there’s a lot of other factors. As far as fighting goes, the training and dedication—I’m in control of it. [It's] the fact that I can be in control of my career that way and I still get that same feeling. It’s just an invigorating rush that I love and makes me feel complete.

Kicking It with Kailin Curran

A Long Strange Trip: Miesha Tate on the Roots of WMMA