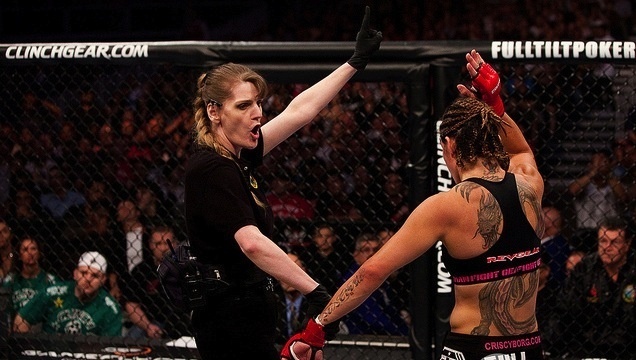 Kim Winslow prepares for every fight the exact same way, dispassionately checking boxes off an internal list in ascending order of importance. She never knows whose fight she’ll be refereeing until she arrives at the venue, and with fight cards changing up until the night of most events, she feels little temptation to investigate beforehand. She’s handed her assignment when she walks in the door.

If it’s a small show, she’ll meet with everyone at once to go over the rules and then sit down with the individual fighters in case there’s something they want to talk about that they’d rather not discuss in public. She makes sure their fingernails and toenails are trim and neat. She checks mouthpieces, the tape on the hands, anything on the ankles, makes sure their shorts haven’t been padded. If she has any predictions for whose hand she’ll be raising, it’s now that she’ll make her private judgments.

“With the amateurs, they’re either going to come out and get knocked out right away or get gassed out very quickly,” she says. “I can see the energy level and just tell. If they’re unusually calm, that’s usually positive. Some of the pro fighters I work with are really laid back. Some of them tell me that if it wasn’t for this sport to get their energy out in a positive way they’d be in jail.”

Winslow looks for personality ticks and they way they carry their weight. If the fighter is hurt, she’ll need to remember. “Sometimes you think they’re rocked in there and they’re not really injured at all," she says. "That’s just how they are.”

If the fighter is experienced, she doesn’t want to condescend to them by repeating the rules again. Finally, when she’s confident they understand each other, she spends whatever time is left meditating and stretching out.

“The important thing is we communicate. They need to know what I say, what it means,” she says. “That’s going to prevent a lot of problems in advance. If they have questions about decisions I make, I’m more than happy to talk to them as long as they’re respectful. I’m not going to sit there and tolerate verbal abuse.”

It was the same story when Winslow arrived at the Mandalay Bay Event Center for the UFC's Ultimate Fighter 17 finale this past April, ignorant as always until being told that she was to call that night’s number-one-contender match between Miesha Tate and Cat Zingano. Before the fight, Tate and Zingano were told that the winner would not only get a coaching spot alongside Ronda Rousey on the next season of The Ultimate Fighter; she’d also get a shot at Rousey’s title. When the bell rang, the way they went at each other didn’t leave you wondering if those promises meant something.

For the first two rounds, Tate arguably had the edge. But midway through the third round, her center fell apart, and Zingano’s knee burst into her face four times. Even the announcers were wondering how much more she could take when Winslow jumped in. Over Tate's strenuous objections, Winslow stopped the fight and awarded Zingano the win. And the coaching spot. And the title shot.

MMA being MMA, and the Internet being the Internet, Winslow’s decision immediately became the flashpoint of a debate about referee training, professional competence, fighter complaints, even the role of gender in the modern MMA landscape. Depending on who was logging onto whatever web forum at a particular time, either Miesha Tate was a crybaby or Kim Winslow was a menace or both.

"Let me explain something about that fight,” Winslow says. “I tell all my fighters, I tell them that I need you to show me you are capable of intelligently defending yourself. I tell them I can only let it go on so long. They have to continue defending themselves intelligently until they’re out of danger or the round is over, depending on the amount of damage they take. If you hear me telling you I need to see you defending yourself, that’s what I need to see. There’s no misunderstanding that.”

“It's something that is very frustrating when you have other people who have never fought a day in their life, like Kim," Tate said. "She doesn't do anything. I don't think she deserves to be a referee. And if she is, she should go to the amateur levels where it doesn't matter as much, and there's not as much on the line, because she's literally ruining people's lives."

Take away its colleges, and Nevada’s only sports season would be fighting season, its pressures and moods stretching out as far and as wide and as endlessly as the desert itself. There are no MLB or NBA teams, and the last time Nevada was talked about in connection to a pro football title was when the Las Vegas Outlaws humped through their single losing season in Vince McMahon’s Dollar Tree version of a league, the XFL.

“If a big fight isn’t here, it’s usually because the hotels didn’t want it for one reason or another,” says Keith Kizer, executive director of the Nevada Athletic Commission. “Pro boxing and MMA: That’s our NFL. It’s huge for us.”

Nevada leaves its professional MMA ref duties to just six licensed pros, as many as four of whom might be assigned to any given card. Licenses are granted for a single year only, and when December 31 comes around, the commission decides not whether to renew a ref's license but whether to grant him or her an entirely new license for the next 12 months. Winslow has been licensed every year since 2008.

“There are a lot of people who want to get in. I’d say I get someone asking about a spot probably once every three weeks,” Kizer says. “Right now unless the sport grows more, we have who we need. We don’t necessarily want to put in a lot of new people at once, either. We want to be able to hit the ground running, but we don’t want to be in a situation where there are three new people and maybe they all turn out to be horrible.”

Winslow was the first woman to referee a UFC fight, really the first woman to have any impact on what happens in a UFC fight a full three years before Ronda Rousey put on her gloves for a pay-per-view. Since then, fans and MMA writers have called for her resignation dozens of times; they were doing so long before Tate v. Zingano. Sites routinely name her the worst ref in MMA. Entire sub threads and Facebook groups seem to exist just to call for her to quit.

Then there was Winslow’s decision in 2012 to stop the fight between former Ultimate Fighter cast member John Albert and Erik Perez after the latter slipped an arm bar submission on the former, even though Albert never tapped. That one prompted UFC President Dana White to take to Twitter and announce that Albert would get a win bonus check despite the “ridiculous stoppage.”

Kizer says none of the controversy has ever put serious pressure to on Nevada to replace Winslow.

“There might be situations where a promoter will tell us a ref isn’t any good, but just as likely we’ll hear from a promoter that someone did a good job on a show,” he says. “You know, every promoter has someone they want to win the fight and a lot of times that’s what they’re worried about. But we’ve never been in a situation as extreme as being pressured not to use a referee.” As to what would force the commission to remove an official, Kizer declined to give specifics beyond saying that it is a “rarity” and that refs usually have good instincts when it comes to knowing when their best days are past. For her part, Winslow wouldn’t speak about any specific callsshe'd made for this story, with the exception of the Tate fight: “I stopped because she wasn’t responding to commands.”

There are some specific criticisms of Winslow that get repeated. One is that because she’s never been in an MMA fight, she doesn’t understand how a fighter thinks and therefore can’t fairly judge them. Winslow does train in the usual suspects--Brazilian jiu-jitsu, kickboxing, etc.--but demurs when it comes to a full-on fight, saying she doesn’t have the killer instinct. Considering that the number of American leagues that require officials to have competed professionally has been comfortably resting at zero since the 19th century, mixed martial arts would be a true trailblazer for adopting the idea.

Another common criticism is that the angular redhead doesn’t have the mass to throw big bulky fighters around when they get out of control, as Chicago Now columnist Ted Gruber argued in 2011 right after a second paragraph reassuring readers he wasn’t sexist. If anything, he wrote, he was concerned for Winslow’s safety.

Neither argument is likely to get Kizer to reconsider Winslow’s 2014 license.

“Most former fighters, if they want to stay in the game they’re going to do it as a coach or a manager. What else is there? Are they going to try and be a ref and make $200 a night? That’s not realistic,” he says. “And there’s this misconception fans have where they think the ref is a bouncer or a security guard. They’re there to call the action but not to engage the fighter if they act like a jerk. It’s not for them to get involved with the fighter is someone goes crazy; that’s for the cops.”

Kizer argues that the only significant difference between Winslow and the majority of pro refs is that she’s on television.

“There’s a line among young lawyers: ‘If you ever hear a trial attorney bragging they’ve never lost a case, you know that person is new.’ If you run an official’s name through Google and you don’t find criticism, they haven’t done a major fight card,” Kizer says. “And it’s best if you don’t read it! There are officials that get eaten up by criticism. You could literally tell before the fights even started. You could see it in their eyes: ‘Boy, I hope I call this the way the fans call it or they’re going to rip me a new one on the message boards.’ It absolutely ruins them.”

Chael Sonnen Wants to Be a Referee Now