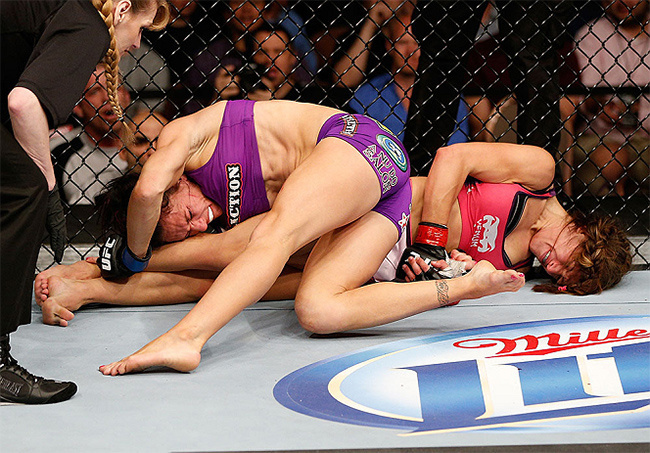 Considering it was the pressure that attracted her to being a ref in the first place, it’s hard to feel bad for Winslow when her officiating draws fire. If anything, reffing should be simple given her work history. Before turning to fights, Winslow worked as an air-traffic controller for 16 years. She was forced out when she was diagnosed with neurological migraines, a career-killer in a profession that forbids working under the influence of even over-the-counter cold medicine.

“It’s similar in a lot of ways,” Winslow says of her former and current jobs. “It’s a high-adrenaline position. That’s what I’ve always been attracted to. There’s a lot of regulations and enforcement. And it’s another male-dominated field.”

Like most of the people who make their living in the fight game, Winslow started out a boxing fan. Only instead of being inspired by Muhammad Ali or “Sugar” Ray, she got her spark from Mills Lane, the diminutive drill sergeant of a ref who kept the threatening monsoon of Evander Holyfield vs. Mike Tyson II in line back in 1997.

“It wasn’t the man’s size; it was his presence,” Winslow says. “I wanted to have that energy.”

She went to school for a license. Her education involved seven hours of training in a gym every day plus testing. Final exams were reffing an amateur match. If you graduated, your diploma was an assignment to a pro fight.

Winslow doesn’t remember the names of the first fighters she officiated, but she remembers the voices in the crowd asking what a woman was doing in the ring without a bikini and a round card.

Early on she worked up through small fights in the Midwest and Southeast. She figured out that though she liked watching boxing, when it came to her new career, MMA--with it's youthful energy and new-school brashness--was a more natural fit.

“It’s almost like I’m a succubus,” she says. “You’re getting adrenaline and feeding off the fighters.”

A few years back, Keith Kizer, the executive director of the Nevada Athletic Commission, was standing on the floor of Caesar’s Palace watching a taping of HBO’s Boxing After Dark when the casino’s president, Gary Selesner, came out to welcome the crowd. Selesner spotted Larry Holmes in the audience and thought it would be the perfect opportunity to tell the retired heavyweight champion just what a great time he’d had watching him fight Mike Tyson back in 1988.

“Larry Holmes was knocked out once in his life, and it was against Mike Tyson,” Kizer says today. “Of all the things to mention! He won, what, almost 70 fights? And it’s the same thing with all fighters: They don’t want their failures to be what they’re remembered for. So they do what they can to protect themselves from those moments.”

From the MMA fights he’s seen, Kizer suspects that sometimes protecting yourself means it’s better to finish unconscious in the ring than tap out. It’s easier to save face than in boxing, where you might have to feign an attempt to get back on your feet, spitting up a mouthpiece as you slide your back against the ropes.

“I’ve been backstage and seen fighters go up to officials after the dust has settled and apologize,” Kizer says. “They’re carrying on, putting on a show, and the second they’re backstage it’s ‘Look I didn’t want to look bad in front of the cameras, don’t take it personally.’”

It’s this kind of thinking that has led to situations where fighters have relied on referees like Kim Winslow to bail them out of fights they no longer want to be in, in a way that allows them to save face, that makes them less a victim than a co-conspirator, and makes the referee the heel.

Winslow says she can recognize when that sort of thing is going on, and that she’s willing to play the game. “I am the scapegoat,” she says. “They can save face letting me know they’re done. If I tell them they’re in imminent danger of me stopping a fight if they don’t fight back, if they don’t respond I will stop it. I’ll tell them before anything starts, I’ll take the heat. Maybe you want it stop for whatever reason but you don’t want to look bad. And some of them have definitely taken me up on it.”

Kizer needs to see two things in a referee to know that they truly belong in the professional ranks.

The first is that he knows they can act like a professional. No asking the athletes for autographs, no sneaking friends into the front row. Don’t bet on the fights. If you’ve got a problem with another official, keep it to yourself.

The second is that he sees the ref trying to improve.

“This isn’t like calling other sports,” he says. “There’s health and safety, both yours and the fighters. There’s knowing the stand-up game; there’s knowing the ground game. In football a play can be over in five seconds. In boxing a round might last just a few minutes. But MMA is five minutes of constant action, barring a knockout or submission.

“Kim is pretty much the embodiment of someone trying to improve and get better. And I tell officials, ‘Do what you want, but if I were in your shoes I wouldn’t read the press. Nothing good ever comes of it. Talk to someone you respect, talk to a former official that can critique you.’”

Winslow knows the career of a ref is on as much of a ticking clock as the fighter is, though probably one with a longer sweep. She hopes to referee MMA in the Olympics one day, though she’d settle for doing a show in Madison Square Garden if New York ever comes around to the joys of sanctioning. In the meantime, she’s developing her own prototype glove. It’s a design that should better protect the hand. There’s no release date set, and it hasn’t been tested in full-on fight scenarios, but in a gym environment it holds up.

Then there are days when she meets with her fellow refs outside Vegas to compare notes.  As much as the fans scrutinize them, they don’t know their weak points the way their peers do. You may be able see how the differences in the way a man moves on camera after taking a beating, but you can’t hear all the ways a man’s breathing can change between round one to round three.

Sometimes when Kim Winslow is watching a fight she see’s something that worries her. It’s a look on the referee’s face, as if he weren’t there, as if he were focused on some spot five feet under the canvas. Once she sees that, Winslow knows too well what comes next: fighters getting bloody long after they should’ve been sent back to the dressing room, cracked skulls, snapped tibia.

“I’ve watched matches and just thought ‘Oh god, they need to stop this.’ No, I’m not going to name specific names. Some are still active. And sometimes they retire and come back,” Winslow says. “I’m just yelling at my TV: ‘You idiot!’”

Chael Sonnen Wants to Be a Referee Now