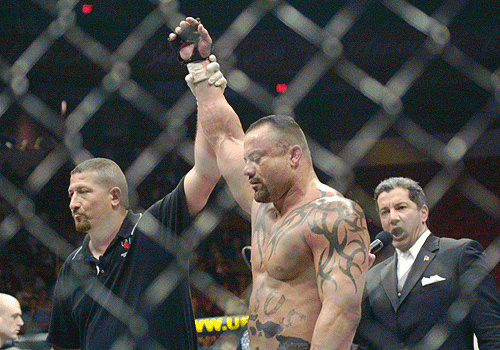 It’s 58 degrees in Orange County. The parking lot of the Market Place Mall is a little damp, and the man playing with the yo-yo is wearing a jumpsuit. The suit has police patches and badges—some kind of Long Beach Police Department issue—but the man isn’t a police officer.  He’s unshaven, and he’s wearing flip-flops.

Tustin, California, is an affluent area, but the man, 6’ 3” and 250 pounds, looks strangely at home for someone so out of place. Orange County has a methamphetamine problem, and the man has that pale, grisly look like maybe he’s brushed off a few incursions of black spiders, but as big as he is, his presence is bigger, like maybe he’s one of the many petty-celebrities lurking the auto parks of Southern California. Also, there's something in his face, some stony regret.

A couple of cops drift by in their patrol car, and they don’t like the jumpsuit. They talk to the man about it, and he doesn’t like that. He can’t explain where he got the jumpsuit, which is a police disaster suit that dates back 10, 15 years. It’s against the law to wear it, the policemen inform him. The man gets annoyed, and they search his car. They find a “small amount” of methamphetamine and a glass pipe to smoke it.

The cops call in their prize; they’ve arrested Kimo Leopoldo, UFC legend, for drug possession and impersonating a police officer. Kimo goes quietly. The next day, he’s released on $20,000 bail. Three weeks before, Kimo had announced his application to head the California State Athletic Commission: "My 14 years of international kickboxing and MMA experience has allowed me to the ability to work directly with professional associations, referees, judges, attorneys , peers, consumers, commission members, promoters, managers, members of the media, and various legislative rule makers."

Kimo had been competing in Mixed Martial Arts since 1994, having first appeared in the third Ultimate Fighting Championship, where he faced Royce Gracie in what became an unexpected thriller—and a breakthrough in the evolution of MMA. His fighting record--10 wins, 7 losses and 1 draw--probably doesn’t reflect the fighter he was; he fought some awfully tough guys and got a few questionable decisions. But his other records reflect the man he was outside the cage: He tested positive for the illegal anabolic steroid Stanozolol, or “Winstrol,” in 2004 and 2006, barring him from scheduled bouts; in 1993, he was arrested for assault and battery and in 2007 for domestic violence.

Art Jimmerson, the 1983 National Golden Gloves Middleweight Champion, was the first fighter to face Royce Gracie in the UFC. Not knowing what to expect, Jimmerson had showed up wearing his boxing gloves—he wanted to hit hard. But after watching the first few fights of UFC 1 that night, Jimmerson understood the implications of the fight going to the ground. Unlike in boxing, if one or both fighters got knocked down or taken down, the referee wouldn’t stand them up. The fight had the potential to turn into some kind of wrestling match. With gloves on, Jimmerson would be helpless in such a contest, so he opted for one glove—an experiment destined for ridicule.

For a fight that went for two minutes, eighteen seconds, amazingly little happened. Gracie feinted with four kicks, then shot on Jimmerson with a “double leg,” a takedown common to wrestling, judo, and a host of other martial arts. Gracie mounted Jimmerson, and Jimmerson, knowing he couldn't stop the punches from coming to his face, tapped out.

Jimmerson hadn’t known what to expect, and neither had the 7,800 spectators at the Denver arena, and neither had the 80,000 watching on pay-per-view, and neither would the countless viewers who watched the event on videotape. And after that first fight, it was still pretty hard to know what to make of the UFC. Announcer Jim Brown scoffed, “C’mon,” when it was suggested that any of these guys had any semblance of technique. But by the third UFC, Brown was enamored. A competitor, he said, “is here for one reason and one reason alone—to destroy the great Royce Gracie.”

Gracie, after defeating Jimmerson, went on to beat five fighters in a row. Two more that night, to win the first UFC, and three more on March 11 of the next year, 1994, to win the second. Among those Gracie vanquished: Ken Shamrock, a scowling, 225-pound American hero and a legend on the Japanese wrestling circuit, and Patrick Smith, the #1 ranked kickboxer in the United States, who, like Shamrock, was 225 pounds of muscle.

To equate Gracie with the biblical David was fitting enough—some of his foes had been Goliaths—but Gracie was more than that. His heroic stature was messianic. Which is why it was such a shock when “Kimo”—Gracie’s Goliath du jour at UFC 3—came out to their fight dragging a ten-foot cross on his back. This Bluto, this overblown bicep, this muscle-bound sucker: He just didn’t get it. He was the loser, the dead meat, the fat on the pyre—and he thought he was the chosen one.

In 1987, Kimo’s high school wrestling team had taken the Hawaii High School Athletic Association Championship. Hawaii and Waianee High School might not be the center of the wrestling universe, but the students are athletic, and the culture, with its diverse and active heritage, has produced many skilled athletes. To limit the conversation to MMA, Hawaii has produced former UFC lightweight and welterweight champion B.J. Penn, winner of The Ultimate Fighter 3 Kendall Grove, and heavyweight contender Travis Browne, among others. The NFL so heavily scours Hawaiian prospects that five players were drafted from the 2007 lineup of the University of Hawaii Warriors.

Kimo was in the Hawaiin genome: He was monstrous but had the flickering speed of a lightweight. He couldn’t sustain that speed for a whole fight, but it was always there and with power behind it. By his senior year of high school, Kimo was, according to one teammate, throwing around the competition as if they were “baby kittens.” In wrestling he found stability in a teen life of upheaval.

But football, with its network broadcasts and superstars and college scouts, offered far finer prospects than wrestling and given Kimo’s build, was a better choice. Football requires lots of players and lots of body types, and you don't have to be an Olympic gold medalist to get paid; Kimo would certainly find a place in college ball, maybe even the NFL.

But Kimo’s big personality and lack of academic interest blew his scholarship to the University of Washington, and following a severe surfing injury to his face, which required extensive reconstructive surgery that he had to get his father to pay for, Kimo was angry enough at life, and determined enough to pay his own way, to enter the “collection” business for a drug dealer in Huntington Beach, California. Clubs and drugs. And Kimo liked both. For three and a half years, anyway; then he tried to return to college football. When he blew out both his knees, however, he was back in the collection and bouncing business. Dispirited and searching, he roamed the used bookstores of Southern California, scouring the religion stacks for some old tome with the answer to it all.

By the time he met Joe Son, a member of a fanatical Christian group, Kimo was ready for a change. Never tentative, he swore his life to God. The joke is that Joe Son’s denomination doubled when Kimo joined. But Son, who had a middling to meager background in martial arts, was right to see an opportunity—a fighting champion for Jesus. The historical term: “muscular christianity.” The trinity—muscles, messiah, and MMA—may seem crazy, but it’s borne out. Ken Shamrock, Matt Hughes, Tim Silvia, Randy Couture, Diego Sanchez, Rich Franklin, Rampage Jackson, Fedor Emelianenko, Pat Militech were all champions, and all muscular christians.

So Son had this guy, a football player with a little wrestling and some other, less legitimate, fighting skills, whom he suspected could compete in the UFC. He also had his convertible Porche, which he could afford because he still lived at home, and a favorite outfit: shirtless. He was an ugly little ogre—five feet, four inches, and 230 pounds—and he made an immediate impression.

Art Davie was in charge of the fightcard for UFC 3. Davie had started the UFC with the Gracies and SEG, a pay-per-view outlet that didn't understand what was going on, but believed Davie when he talked. Davie had been working on a beer campaign when he came across a story in Playboy about the Gracie Challenge—Rorion Gracie (the eldest son of Brazilian jiu-jitsu founder Helio Gracie) would take on any challenger and back it with a $100,000 wager. And Rorion--and the Gracies going back 60 years, so the story went--never lost. So Davie found Rorion and together they started the UFC.

The Playboy, the beer, the boxing as a kid, the Vietnam War (a sergeant), the fedora: Art Davie gave off a vibe that Son could relate to. Davie was an adman who looked like an adman. Plus he was maybe a little psychopathic.

So Son got Davie’s address from the yellow pages, put Kimo in the passenger seat of the Porche, and tossed the shirt. Unannounced, the pair showed up at Davie’s office—Son revved the engine, attracting the attention of the UFC founder. Son and Kimo—who glared, maniacal and mute—got Davie to let them into his office, and Davie couldn’t curtail his curiousity. He had to know their real agenda was the religious message, but he was in the market for meatheads for Royce to beat down—and Kimo was perfect.