Know Your Role: The Hard Lessons of Regional MMA 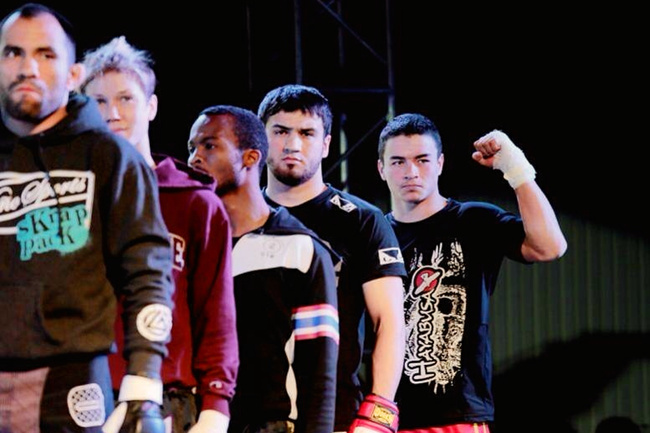 I went to a small fight event in the foothills of Himalayas last weekend, in a city called Ya’an, famous for good fish, pretty girls, and a lot of rain. I ran into two fighters out of the renowned Cesar Gracie Academy in California there, Juan Quesada and Moses Baca, and spent a couple days hanging out with them and talking about MMA in China, in California, and the Tao of Nick Diaz.

The event was hosted by C3, a small regional promotion that stays within Sichuan Province for the most part, and in the smaller towns within the province at that. Towns like Xichang, home to the Yi minority that terrorized salt caravans for centuries; and Emei Town, at the foot of one of China’s second most famous martial arts infused Buddhist sites, Emei Mountain. And towns like Ya’an, where bamboo and tea grow lush on the rising peaks, and pandas lie around scratching their bellies in a wet, waterfall strewn gorge called Bifengxia.

C3 put on a great show for the 3500 or so locals who crammed into the city’s stadium to watch Chinese fight foreigners. The music was loud, the lights were bright, and the white ring girls were tall and skinny. Dancers shook their little butts. Most of the Chinese fighters lost and all of the fights were sloppy affairs, rife with mismatches and incompetent refereeing, but the matches were exciting enough to get the crowd roaring and moaning. 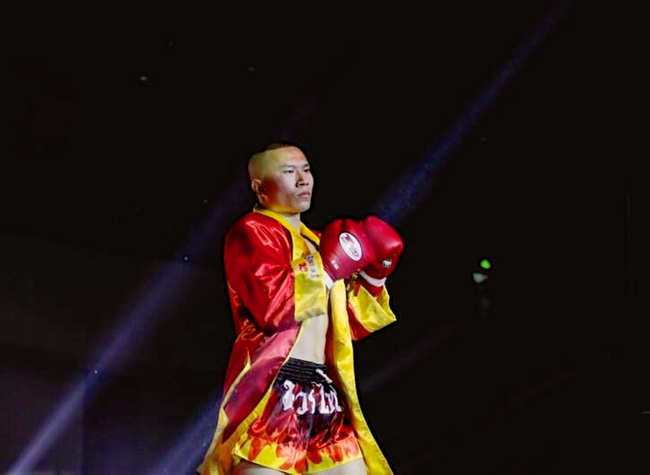 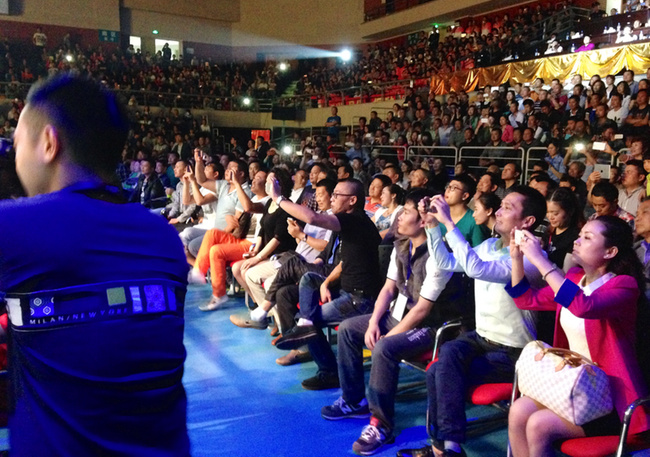 The crowd at the Ya'an City Stadium.

Barely anybody noticed that the doctors gawked when they should have been checking out a dazed fighter, and only the foreign fighters grumbled about that the weigh ins before the fight were a complete farce.

As far as I know, I am the only one that saw the textbook Eurodive from a French male model named Pierre fighting out of Silas Maynard’s notorious Shanghai gym. Pierre was cornered by Silas’ girlfriend Albie, a tall skinny girl with green contacts, and the local girls swooned when he strutted past. But he was facing the local Ya’an hero, a fierce Sanda fighter named Luo Zigang, and as soon as the diminutive Luo landed a decent shot, Pierre dove to the ground. He even jerked his body midair like a classic footballer.

As far as the Chinese crowd was concerned, their boy beat up the handsome, muscle bound foreigner. 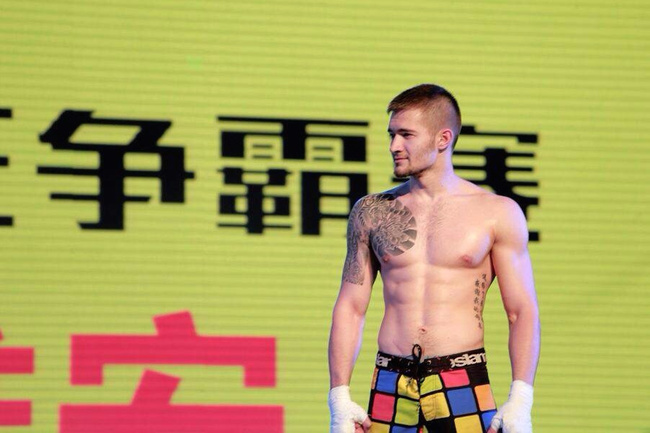 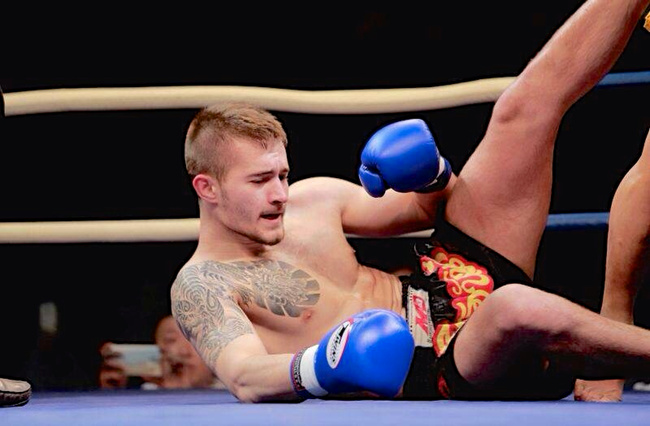 Pierre after getting "knocked out."

Juan and Moses are old school fighters from California with years of training between them, and years of experience with small time regional circuits and the big time circuits too, via teammates Gil Melendez, Jake Shields and the Diaz brothers. They had an extra day in Chengdu where I live after the Ya’an event, so we hung out and talked. I was griping about how little they had been paid, how they had been left to fend for themselves by their middleman hook-up, and the general bullshittery of the fight-side of the event. But for them the bullshit wasn’t that extraordinary.

Moses grew up with the Diaz brothers. He’s been training since he was a kid and witnessed the decade of domination that the Cesar Gracie team enjoyed, and he told me that the secret was unity .. and a whole bunch of sparring. The way Moses tells it, guys would come into the gym and see the team going 70 - 80% at each other in the ring, and be astounded. But that constant sparring meant that everyone on that team had ample chance to figure out what happens when they throw this certain combo, how to move fluidly from one phase of the MMA game to the next, and how their own body reacts to getting beat up, pinned down, and submitted. 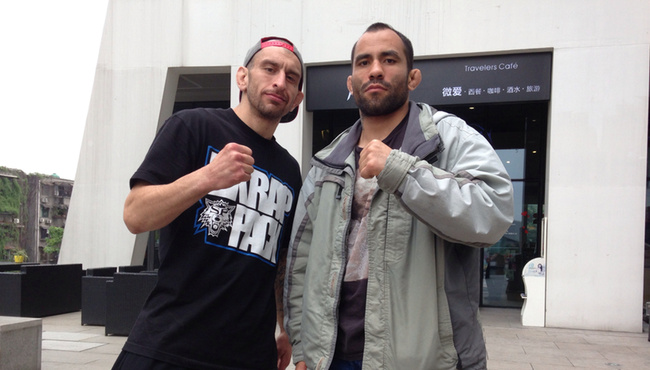 Juan then told me about his first fight, and the intense training that led up to it. After months of hard work, he went in and got choked out in the first round.

“The physical, man that shit’s easy,” said Juan. “It’s all about the mental. Imagine how I felt going in there and then getting choked out in the first round. Getting up after that and going on, fighting, and then winning. That’s what’s really hard.”

I sat back and thought about the fights in Ya’an that I had just seen. I don’t think a single Chinese fighter on that card ever went through what Juan went through, or trained the way Moses trained, or had the small circuits filled with guys like Moses and Juan to test himself against.

Instead, those Chinese guys - a couple of whom have the talent to be elite out here - are performers in a show, cash cows for a promotion that knows a lot about how to maneuver in China, how to make cash, and how to please the crowd, but knows nothing about how to develop a fighter or the sport.

The event stood in stark contrast to the RUFF 12 event I saw in Shanghai earlier this year. The RUFF fights were all well-matched, Herb Dean was the ref, and the doctors were pros. But RUFF is definitely still hemorrhaging money - they had maybe 500 people at the show, and the floor seats were more or less empty. The Chinese regional shows are packing them in, and with the connections to local sponsors, raking it in, but they are doing nothing for the fighters themselves, but providing a little spending money. It’s a dichotomy that can easily change though, as RUFF gets savvier with the local sponsors, and C3 gets better at managing fighters. They can learn from each other. 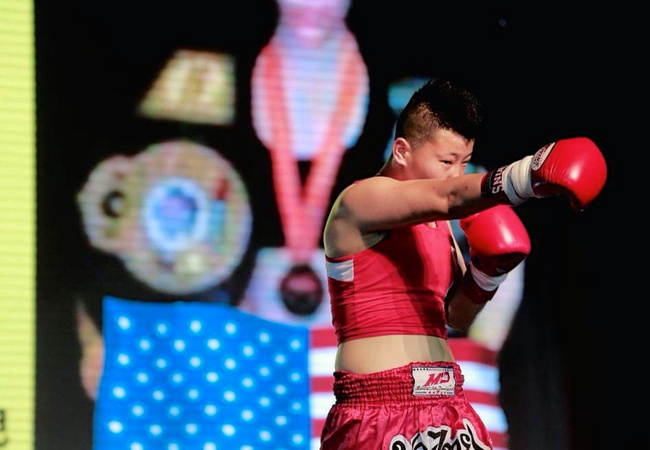 Yang Yang, who was knocked out by Lindsay Scheer out of the Real Fighters Gym in Louisville Kentucky.

Both promotions can learn a lot, however, from a US-based promotion like Tachi Palace Fights. TPF is a one-casino show out of Lemoore, California that is developing good talent, and has become popular enough to make a dent in the saturated US MMA market. They’ve been going strong for almost 15 years now, and in a 2010 interview, event coordinator Jeremy Luchau said the secret to success for small promotions is to not try and be the UFC. Know your role. Luchau bluntly stated that Tachi Palace wants to be a feeder organization for the big guys. And for that, a case in point is a guy like the Tachi Kid, Poppies Martinez.

Poppies has put in his dues and the TPF has been his platform. After TPF 18 in February, when he submitted Chris Culley, Poppies publicly asked for a chance to get back into Bellator. He was granted that chance, and submitted Josh Smith at Bellator 116 just a couple weeks ago.

Poppies isn’t the only guy to come out of TPF and make a name for himself, and that only underscores that promotions success in “knowing its role” - a small regional farm league for the big guys. If you watch a TPF show, the production value is good, the fights are well matched and fun to watch, and the whole feel of the event is professional, although a few notches below the big guys.

China’s nascent promotions, if they want a run as long as Tachi Palace has enjoyed, must choose what role to play. The local, regional circuits in China are currently playing the hype man role. Not a lot of quality fights, but a good amount of showmanship. The focus for C3 is making money and pleasing the crowd and that is actually a very good thing for the sport, if you take a step back and try and ignore the Eurodive. The last C3 fight I watched was in August 2013, and the production has improved markedly. What impressed me the most was the announcing, which took great pains to explain what was happening in the MMA and Muay Thai fights, while also exhorting the crowd to cheer for both foreign and Chinese fighters.

There were a lot of Chinese fighters in the crowd for the Ya’an event, guys who traveled far for a look at some fights. There were also a lot of young wushu and Sanda practitioners, kids as young as six years old, and they watched wide eyed as the blood flowed and people got submitted and knocked out. Sure the fights could have been handled a lot better, but it’s a start.

For RUFF, a foreign operated MMA promotion based in Shanghai,  the Tachi Palace Fights can be a great role model, provided RUFF wants to be a feeder organization for Bellator and the UFC. But in my conversations with Joel Resnick, the man who runs RUFF, the goal is to be the standard bearer for quality and professionalism in China’s MMA scene. Resnick want to be the most authentic MMA show in town, even if it costs him his life savings.

Regardless of whether you stay small and local, like C3, or try and go national like RUFF, regional promotions must be their own farm league. Any good promotion gives their guys the cage time they need to develop their skills, and get accustomed to what its like to be in a fight, time and time again, in order to rise up and become elite. They have to be breeding grounds for excellence. When Juan told me about his first round choke out, he also mentioned how he threw himself back in there. That spiritual journey, from fear, to desolation, to redemption and victory has to be played out repeatedly before a fighter can become a warrior. 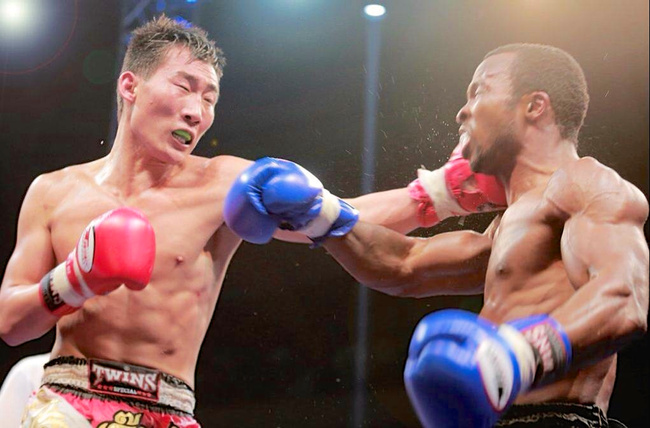 Liang Shoutao and Arthur from Connecticut in the best fight of the night.

Small Chinese promotions like C3 will learn that warriors bring crowds, not clowns. For now, the spectacle works, but the crowd laughed when Pierre dove. They jeered when Moses’ opponent curled up after a few hard shots. And they went nuts during the best fight of the night, between a soft spoken black kid from Connecticut named Arthur, and the Chinese kickboxing ringer, Liang Shoutao. They went toe to toe for three rounds, with Arthur pulling out the decision. The crowd loved it. Greedy promoters take heed.

Small promotions make mistakes - and hurt the sport - when they fail to provide the proper matches and challenges for their fighters, or in the worst case, when they exploit fighters solely for commercial gain, with no regard for their development at all. The small regional promotions in China are helping to spread the word, but if they don’t start developing the talent only they have access too, then they will hurt the sport, and eventually kill their cash cow in the process.