Kotoshogiku: The Japanese Ozeki Who Could 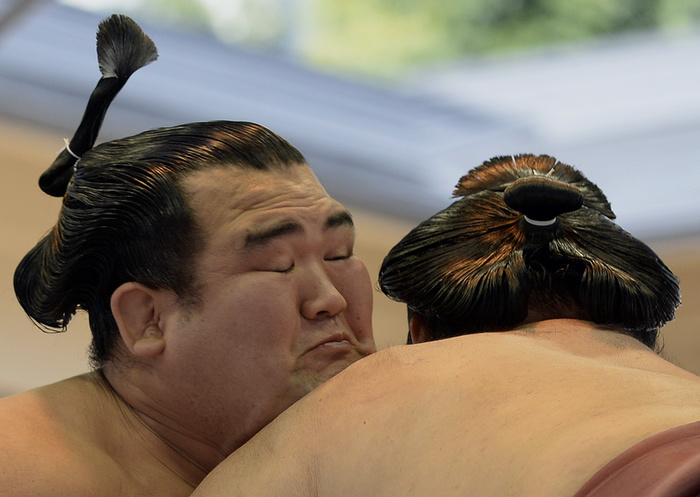 Sumo is the national sport of Japan but it has been losing popularity in recent years. Part of this was due to a match fixing scandal in 2011, but just as much had to do with the continued domination of each basho by Mongolian yokozuna. At the end of 2015 it had been a decade since a major tournament had been won by a Japanese rikishi. It was a truly an unusual situation; imagine for a second that every Muay Thai stadium champion in Bangkok for the last ten years were a farang, or that every great matador in Madrid was Dutch born and you can begin to get a grasp on how this might effect the feeling of the country towards their national pastime. But the January 2016 basho turned the order of things on its head as Kotoshogiku, an injury plagued also-ran, did the unthinkable and took the tournament crown away from the Mongolians for the first time since the Estonian, Baruto achieved his single basho victory in 2012.

Over the first seven days of the basho, Kotoshogiku was wrestling out of his skin. A straight forward meat-and-potatoes rikishi, Kotoshogiku looks to get his underhooks, raise the opponent's weight, and drive them out of the ring. This results in the funny looking repeated jumps or 'bumps' at the boundary in an attempt to force a few extra inches of retreat out of his opponent. The vast majority of rikishi win most of their matches by force out rather than a trip or throw, but Kotoshogiku is on the extreme end of the spectrum, massively favouring all out aggression and the force out.

But a couple of Kotoshogiku's first week wins came by way of a throw as his opponent offered some resistance at the edge of the dohyo. Sumo is considered a fast moving sport and despite a notable four minute war taking place in this January basho, it is hard to deny that most bouts finish in under a minute—but Kotoshogiku was still attracting attention for getting the job done at a rate of knots.

In Sumo: The Art of Six Second Fighting I name checked Kotoshogiku as the perfect example of what sumo pundit David Benjamin termed 'a bulldozer'. The danger of fighting as aggressively as Kotoshogiku does every time is that the rikishi becomes predictable and ends up being either side stepped, or pushed down. Kotoshogiku suffered the latter in a bout in the 2015 July basho.

One of the rikishi competing in the basho who had shown Kotoshogiku some significant trouble in the past was the powerhouse Mongolian ozeki named Terunofuji. The two had met several times before, but Terunofuji had proven strong enough to stop Kotoshogiku's charges and in the 2015 Nagoya basho Kotoshogiku even abandoned his usual aggression in the tachi-ai to instead sidestep Terunofuji. In their most recent meeting, Terunofuji had halted the charge of the ever-aggressive 'Giku' and forced him out handily, leaving Terunofuji ahead in their rivalry, 5-2.

Terunofuji looked as powerful as ever in the first few days of the January basho, conceding double underhooks to Shouhouzan, withstanding his full strength, and then simply walking him out.

Unforunately, Terunofuji was forced to withdraw in the first week after suffering an injury, but Kotoshogiku's path to the top suddenly got a little easier. Still undefeated going into day eight, Kotoshogiku was matched against Kisenosato. Kisenosato was considered by many Japan's best hope of a basho victory in recent tournaments and he certainly has it in him to beat any of the top three rikishi on any given day. Kisenosato has lost more than a few fans because of his love of mind games. The bout can't begin until both wrestlers touch both hands to the floor of the dohyo, and so playing around and stalling in this area has become somewhat commonplace. Kisenosato spends more time than most playing games before the match.

With sixty meetings between them, you would expect Kotoshogiku to be ready for Kisenosato's funny business but as Kotoshogiku charged he was sidestepped by Kisenosato. However, 'Giku' recovered admirably and drove Kisenosato from the ring just the same.

On day ten, Kotoshogiku met the yokozuna, Kakuryuu. Of the three Mongolians holding the highest rank in sumo, Kakuryuu is the least accomplished having won only a pair of basho, though he is every bit as skilled as the others. A great all around wrestler, the counter trip that he hit on Tochinoshin on day seven was an early tournament highlight.

Once again, as soon as Kotoshogiku locked his grip around Kakuryuu it seemed like the technician had no answers. Towards the boundary and out of the dohyo with the yokozuna.

Day eleven was the breaking point of the tournament. The two undefeated pack leaders, Kotoshogiku and Hakuho would meet.  Hakuho is a superb technician, specializing in the popular over-arm belt throw, uwatenage. Driving up under his opponent's armpit with his underhook, Hakuho would use the returning force to pivot and spiral the opponent downwards. By week two of the January basho he'd already hit it a handful of times.

Hakuho is also the most accomplished wrestler of all time on paper, having thirty-four tournament victories to his name. But Hakuho has also made something of a heel turn in recent tournaments. In the September basho he palm struck an opponent well after the match was over, and in this basho he threw a rikishi once they were already clearly out of bounds and not resisting. Add to that his sidestepping of an opponent during the tachi-ai (very unpopular with some in the old school and especially if the larger man does it), and Hakuho was very clearly not looking to make friends this tournament.

In their fifty meetings Kotoshogiku had won just four bouts off of the great Mongolian yokozuna. It seemed as though Kotoshogiku would give up his undefeated streak and Hakuho would go on to collect his thirty-fifth basho title.  As the two locked up, Hakuho attempted to turn but Kotoshogiku stayed lacquered to him, liberally applying those hops and easily forcing yet another yokozuna from the dohyo. Hakuho suffered his first defeat of the tournament and Kotoshogiku entered the last four days as the sole leader.

Hakuho and Kotoshogiku both ploughed through their next two opponents and then on day thirteen fortunes changed. After defeating the third yokozuna, Haramafuji on day twelve Kotoshogiku met Toyonoshima and suffered that issue which has plagued him throughout his career, a deflection of his initial charge. Thrown past Toyonoshima, Kotoshogiku couldn't recover and was thrown out of the ring.

On the same day in a battle of yokozuna, Hakuho took the back of Kakuryuu from an uwatenage attempt and forced him out of the dohyo. Hakuho and Kotoshogiku were level again.

On the penultimate day of the tournament, Japan's victory was sealed by the tournament's underachiever. Kisenosato, perhaps through his usual mind games, forced a slow looking Hakuho out.

Kotoshogiku rolled onwards, winning his final two matches and becoming the first Japanese rikishi to pick up a basho win in a decade. While he is only thirty-one years old, it will be interesting to see if 'Giku' can follow up on his success. His history of injuries and his incredibly aggressive, labour intensive style of wrestling might hold him back in that pursuit. It seems likely that if he can pick up a second tournament victory the Japanese Sumo Association will be quick to promote him to yokozuna in stoke the flames of passion in casual audiences who have been drawn back into sumo by Kotoshogiku's first tournament victory.

A final interesting thought to take away from the first basho of 2016 is that the three Mongolian yokozuna completed a rock-paper-scissors wheel of bouts. Hakuho bested Kakuryuu on day thirteen. Kakuryuu used his whizzer to force Haramafuji to the ground on day fourteen.

And Haramafuji, arguably the most technically spectacular of the three, performed a brilliant switch from what appeared to be all out offence to a simple throwdown against Hakuho.

The first tournament of the year provided some tremendous technical showings, actual drama, and a fresh face at the top. The fact that this new tournament champion was Japanese and will draw further media interest is simply a bonus. The next basho starts in March and you can keep abreast of it by following Kintamayama on YouTube. It's a beautiful game and well worth your time.

Photographing the Next Generation of Sumo Superstars