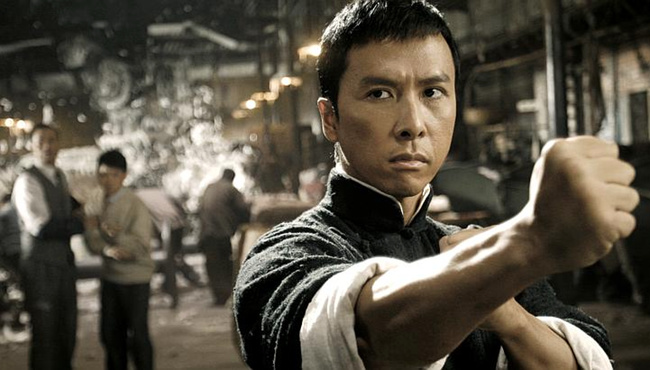 Twitch Films recently broke the news that Donnie Yen is set to play a Jedi in Star Wars Episode VIII (not this one). This is fantastic news both for the Star Wars series and for Chinese martial arts. The films get another true martial artist to soup up the duels while the Hong Kong kung fu scene gets to show off their newest leading man.

Donnie Yen is big in China. His breakout role as the lead in Ip Man (2008) made boatloads of cash across Asia and established his unique brand of martial arts hero, somewhere between Bruce Lee and Chow Yun Fat: handsome and cultured, but with a ruthless streak that translates well to the streets. Yen, unlike most of his wushu compatriots, is a bona fide ruffian who spoke wistfully of the UFC, something he missed by a few years and a few injuries. A lot of his co-stars and contemporaries have said he is one of those wushu guys, the ones who can actually fight. Probably valid, considering the presence he has onscreen.

Yen grew up in Boston and studied karate there, before being sent back to Beijing to study wushu by his mother—a taiji master and force in the martial arts community. Yen was getting into trouble in Boston and it’s not uncommon for Chinese families to escape stifling, oppressive China and set up a new life in the US, only to find the temptations of drugs and the spectre of violence present different yet just as insidious dangers to their children.

Yen spent a lot of time studying wushu from great masters in Beijing and Xi’an, even training with US-based martial arts pioneers like Stephen Berwick for a time, before joining the film business as a small time actor and choreographer. Like all of the wushu guys before him, Yen earned his chops as a fall guy in regional films, playing the villain opposite Jet Li and Jackie Chan, before eventually proving himself capable of wooing the woman, whipping the thugs, and representing the archetypical Chinese kung fu hero.

People took to his persona, especially in Asia. The way he portrayed Ip Man was probably not to close to real life, but it presented the old master as a force to be reckoned with, a dangerous man teetering on the edge of the light and dark sides of the Force.

It will be interesting to see what type of Jedi Yen will be. He is supposedly an ally of Han Solo, which present some interesting maverick possibilities. Maybe he pulls some particularly un-Jedi stunts that get him a little too close to the Sith side of life? Maybe he just dominates, plowing through Stormtroopers and Sith-Lords with MMA-infused kung fu (a style Yen has been developing over the last few films), keeping Solo’s aging soul safe from harm.

It’s a good look for the franchise. Some of the best scenes of the prequels featured Ray Park kicking Jedi butt as Darth Maul. Maul’s duel with Qui-gon and a young Obi-won saved what was otherwise a really bad film. Worst-case scenario, Yen saves Episode VIII with some ludicrous epic battle with a Bane-like Sith-Lord.

But considering the teasers for Episode VII, I think we can expect a best-case scenario for the next installment.