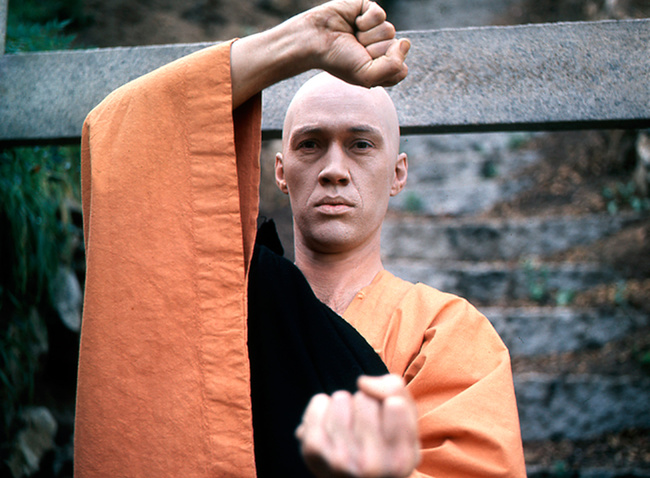 The 1970s were the heyday of martial arts motion pictures. Movies were pouring out of Hong Kong, each one more bombastic than the next. Movies like Enter the Dragon, Game of Death and the Five Deadly Venoms featured graphic fight scenes and minority heroes fighting against the white establishment. Chinese culture was treated with reverence—especially the Shaolin Temple—and the fascination the West had with the Orient found its way into a million living rooms.

One of the most popular transmitters of Asian culture was the television series Kung fu, which ran from 1972 to 1975, smack dab in the middle of the martial arts renaissance flowing out of Hong Kong and into North America. The series starred David Carradine as Caine, the wandering half-caste Shaolin monk with a price on his head, doing his worst to avoid trouble in the American Wild West.

The pilot episode ran for over an hour and told the story of Caine through flashbacks to when he was a boy, waiting outside of the temple in the rain with a small group of kung fu wannabes. In that episode, we learn that Caine has an American father and a Chinese mother, both dead, but we never figure out what happened to them or why Caine ends up wandering through Henan province.

The boy Caine is forced to go through some classic “oriental” tests to prove he is worthy of learning the secret arts: he has to stand and wait outside and demonstrate his willingness to suffer; he has to try and fail to snatch a pebble out of the master’s hand; he must walk on rice paper, sneak up on the blind master, and otherwise perform tasks Mr. Miyagi would replicate years later to help his charge learn the martial arts. He spends years at the temple, finally gaining his dragon and tiger brand—the sign of a Shaolin monk—when he is a grown man.

The classic exchange during this period of Caine’s life is the “grasshopper” dialogue between the boy and Po, the blind master:

Great Taoist wisdom. Ed Spielman, the creator of the series, was by all accounts a sinophile fascinated with the religions and traditions of ancient China. He reportedly spent years studying the language and customs, unsuccessfully trying to gain entry into the martial arts world, and hanging out in Chinatown before he pitched his version of “China meets the West” to Hollywood.

There is some controversy surrounding the creation of the series: Bruce Lee was pitching a kung fu western to Warner Brothers around the same time as Spielman, but his idea wasn’t picked up because Hollywood balked at an Asian hero on prime time television. Plausible. But a moot point once the series began, and proved itself to be wildly popular with the average American.

A white hero who ventures to the Orient, comes back with special skills, and is revered by the people he learned his arts from ... classic orientalism, despite the cast and crews best efforts to educate Americans about the best of Chinese culture. That particular story line has been repeated ad nauseum in dozens of movies and TV shows: Bloodsport, The Last Samurai, Avatar, Big Trouble Little China, even the Golden Child. That trend is slowly starting to die away, years after Bruce Lee showed that ethnic Chiense could draw the audience. The idea that a foreigner could venture into the heart of an ancient civilization, spend years at a temple and come out a complete badass is just so fascinating and attractive that it will endure as long as there are young men who dream of being the toughest dude on the planet.

The first to really portray that idea on the screen was Caine, the philosophical monk who must kill but hates to do so. No one has really done as good a job as Carradine did, except perhaps the elder Carradine as Bill in Kill Bill. There is a sort of authenticity to the character that pushes through the various stereotypes, fallacies and fantasies of the show: it’s easy to picture Carradine in China squatting roadside with some coolies and slurping noodles. The fight scenes are weak for the first season or two, and nothing the character does resembles any kung fu I have every seen. It’s the way Caine carries himself, the little couplets he quietly drops every episode, that make the idea of a little Chinese-American boy becoming a branded Shaolin master believable.