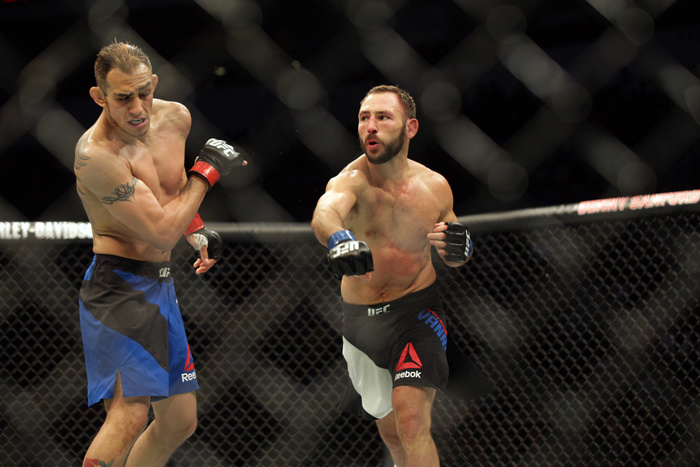 Not many fans had heard of Lando Vannata when he stepped in at short notice to fight top five ranked lightweight, Tony Ferguson, a few weeks back. By the end of the first round he had entered many viewers' “favorite fighters” lists. With no name wins under his belt and no time to prepare, Vannata came in and became the short notice opponent that everyone hates: the weird one. 'Groovy' Lando showed all kinds of weird looks, wobbled Ferguson numerous times, and dropped the elite lightweight with a head kick. We didn't examine it immediately after it happened because it was on such an understated card but the fight has been making the rounds again on the forums this week and on review it is not just a barnburner but one with a few interesting lessons for the fight fan.

The first thing to note was the effectiveness of Lando's weave. And I'm not talking about the glorious head of hair he was rocking back when he was 6-0, fighting for RFA, and called Landon. 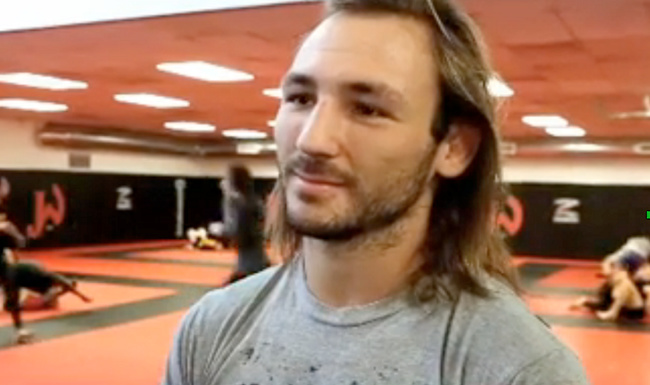 I'm talking about bending at the waist, as Vannata was doing so successfully to get inside of Ferguson's range advantage. The difference between a 'dip', 'bob' or 'level change' and a 'weave' is the difference between the squat and deadlift—both involve the legs and back but the level of involvement is different for each movement. The weave itself is actually the completion of a 'U' with the head, bringing the fighter up on the other side of the blow, which has just gone over his head. The easiest way to practice weaving is to get a friend to stand in front of you, place his right arm out as if he has thrown a straight, and then rest it on your shoulder. You then proceed to bend at the waist, move under the arm, and come up with it on the other shoulder. Repeat until your back hurts. Alternatively tie a washing line across your patio at about head height and then weave up and down it as you will see every fighter do in segments showing their preparation in the gym.

Each time Ferguson started punching, Vannata would weave and Ferguson would miss. Vannata would feign a strike just to have Ferguson swing back and weave to a dominant angle to throw back. It was terrific to watch especially given Ferguson's reputation for boxing people up.

One of the reasons you won't see the weave so much in mixed martial arts is the constant fear of the knee or kick to the head while bending over. There have been a fair few fighters who used it well—particularly while advancing. Igor Vovchanchyn used to weave excellently and come up with bizarre overhand left hooks into flurries against giants in bareknuckle tournaments. Fedor Emelianenko used to weave off of his right hand lead straight into a takedown attempt which worked at a great percentage.

The weaving left hook is a wickedly dangerous counter punch because if the opponent can be drawn into an exchange the fighter can weave out the side door and leave his left hook behind him while his man is swinging at air. Kyoji Horiguchi makes use of this a great deal.

T.J. Dillashaw put Renan Barao on rubber legs with the weaving left hook in their second fight and K. J. Noons also had success with it through his career.

And let's not forget that weaving into kicks is a tremendous way to catch even disciplined fighters out. You will recall Carlos Condit kicking Georges St. Pierre in the head while coming up out of the weave.

Throughout the Vannata – Ferguson bout the weave saved Vannata from bad spots and carried him past Ferguson's longest blows. Vannata also made excellent use of low line straight kicks. His side kick to Ferguson's lead leg perfectly set up a spin into a backfist in the first round which stunned Ferguson. This combination is most useful to side kickers for when their kick is parried off course, but Vannata went on the offensive with it.

As Ferguson began to adjust and throw more kicks in an attempt to dissuade the weave, Vannata caught a leg and drove Ferguson backwards, throwing his own high kick and badly hurting 'El Cucuy'.

Here we saw the value of the controversial 50/50 tie up. If you are much more experienced that your opponent in the position it's a great place to attack from. If you're not, as long as you keep trying to attack and look after your own legs it's a great stalling position. And there are times when that is exactly what is needed. After Vannata decked Ferguson he swarmed to finish and Ferguson got his head underneath Vannata and entwined a leg. A good start as nobody punches well directly underneath their rump. As soon as Ferguson got Vannata's leg across his body he had compromised Vannata's balance and even if Vannata had been able to stay standing he certainly couldn't have put in the finishing blows he was looking for on Ferguson.

Certainly we all remember the Cheesecake Assassin and his opponent comprehensively demonstrating the striking options from 50/50:

When the two returned to the feet, Ferguson continued to throw kicks, unperturbed by the knockdown. And this turned out for the best because Vannata—a smart striker—began to pick up his legs to check the kicks. The problem was that while he was on one leg he couldn't weave or slip. Ferguson started to connect jabs and straights on Vannata as he was trying to check kicks that didn't come. In the first minute of the second round Vannata was obviously slowing and Ferguson had bloodied him up.

Here the weave began to work against Ferguson. Even in boxing the counter for the weave has been to grapple. Most will lean on the back of their opponent's head and neck in a clinch which makes the weaving fighter carry their weight while they pretend not to hear the referee's first few calls to break. Alternatively there is the method of Vasyl Lomachenko, Archie Moore, James Toney and Floyd Mayweather. The truly classy boxer brings his forearm down on the back of the opponent's head and then chucks them out under the armpit, angling off.

Mayweather was excellent at connecting the right straight exactly where he knew the opponent would stand up.

There are also those that use what Champ Thomas called a 'sawing' punch. That is a right hook which “misses” and is actually just a completely illegal forearm strike brought down on the back of the neck. Ray Sefo used this one out of frustration against a cowering Bob Sapp in K-1.

It is far, far easier to place your weight on the back of the opponent's head and neck when they bend forward at the waist than it is to time uppercuts or knees from underneath. In mixed martial arts the weave offers another chance for the opponent. The chancery game. The front headlock and all of the guillotine and arm triangle variations that stem off of it. You will recall that when examining Justin Scoggins we pointing to his tendency to shoot takedowns by bending forwards at the waist when his opponent stepped in rather than level changing while staying more upright. This led to Scoggins' head getting caught in the guillotine against many of the opponents he has fought and John Moraga tapped Scoggins out on the third or fourth attempt. When bending at the waist the guillotine and its cousins are a severe threat.

Tony Ferguson caught a hold of Vannata's head three times in this bout while Vannata was weaving. The third and final time he made it count, catching Vannata's trapped arm across his body and securing the infamous D'arce choke. The D'arce is a no-gi arm triangle which developed from the Brabo grip which Leo Vieira used to use while passing guard—wherein the lapel is passed behind the opponent's back and up over their opposite shoulder.

The D'arce has exploded in popularity among MMA fighters in recent years but there have still only been eighteen D'arce choke finishes in the UFC (though the technique chains with the Peruvian and Japanese neckties, the guillotine and the anaconda choke). Of those eighteen, Ferguson owns three, or about seventeen percent of all D'arce finishes in almost four thousand fights held in the UFC. The D'arce is Ferguson's money technique and if he gets a whiff of it there's a good chance he'll finish it before his man can defend themselves.

Vannata's first fight in the UFC was a terrific showing even if an early second round loss is what is going down on his record. We learned a lot about him and we saw a lot of principles demonstrated. Any fighter who has been working with Brandon Gibson since he was a teenager is always going to bring some interesting stuff to the ring and Vannata has the added ability to allow some personality to shine through in his method of fighting. The Groovy One is going to be a fun guy to have around UFC.