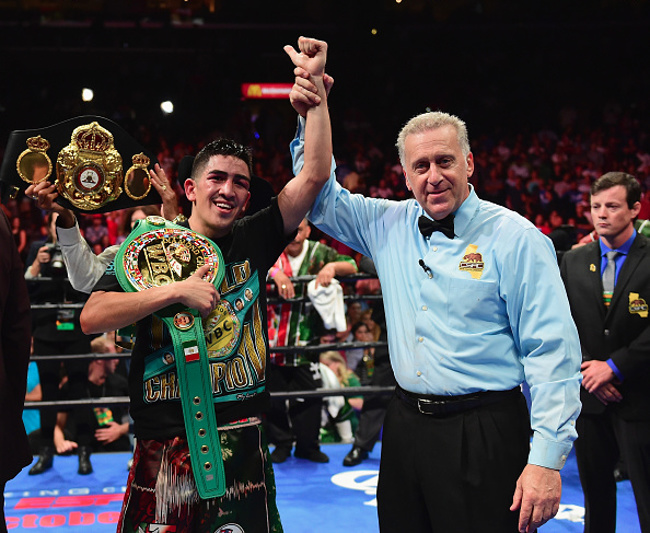 Leo Santa Cruz outpointed Abner Mares for a majority decision win last Saturday night and won some version of the WBA featherweight title, making it his third belt in three weight classes. Two judges scored the bout 117-111 in favor of Santa Cruz, with the other scoring it a draw. I had the fight a bit closer at 116-112, but the right fighter earned the nod in my opinion.

At the end of pre-fight instruction, referee Jack Reiss said to both fighters: “Fight hard but fight clean”, which is an apt description of how the fight played out. Analysts are calling it a potential for “Fight of the Year”, though for me, there was more holding than I preferred (mostly initiated by Mares) and probably a little less exciting than other places are making it out to be. Still, the bout held solid action throughout and had significance in its outcome—two things that are sadly not seen enough in the sport nowadays. Overall, it was a fun fight to watch and a good representation of what boxing should look like. I’d recommend any fight fan to check it out.

From the opening bell, Mares wasted no time by bull-rushing Santa Cruz from corner to corner as the two would exchange precise blows on the inside. The action would remain so for about two rounds, until Mares seemed unable to hold the pace, and as the left jab of Santa Cruz emerged. Having the longer reach, Santa Cruz was able to control the fight from the outside, and while Mares exchanged well while the two were in close, his inability to get past the jab or set up his own proved fatal for his chances. It also proved the importance and efficiency of boxing’s most basic punch. Final punch statistics showed Santa Cruz landing 71 jabs compared to the 7 of Mares, a portion of a total 373 punches landed for Santa Cruz and 227 for Mares.

Santa Cruz confirmed the strategy in the post-fight interview.

“I stayed outside with the jab [and] we were able to take control,” Santa Cruz said in the ring afterward. “My dad told me that we could beat him by boxing. We wanted to be aggressive, but tonight we had to box him too and that's how we got it done.”

Mares, on the other hand, thought differently of the final decision.

"I think I made a mistake in my strategy," Mares continued. "I came out strong and my corner was telling to slow down, and I wanted to go as fast I as I could and I think I should have stuck with my gut. Initially, my plan was to box him, but I started out really hard. Nothing surprised me about Leo. I knew what I was up against."

Santa Cruz is now both a super bantamweight and featherweight titleholder and will soon be forced to decide on which class to campaign as champion. Both divisions are deep in talent. Scott Quigg, Carl Frampton and Guillermo Rigondeaux dominate the super bantamweights, and up north there’s Gary Russell Jr., Vasyl Lomachenko and Nicholas Walters. Plenty of good fights can be made for Santa Cruz.

For Mares, the loss is certainly a setback but by no means the final stake in his career. Though losing, the performance proved his place amongst the top of the division and that he would be a worthy opponent for any of the current featherweight belt holders or even dropping back down to super bantam and taking on the other aforementioned names. A rematch with Santa Cruz is a possibility as well; the new champ certainly is open to it.

“If he wants the rematch, I’ll give him the rematch,” Santa Cruz said. “I want to fight the best. I want the big fights.”

As long as the pettiness of promotional rivalries doesn’t get in the way, the names for good bouts are certainly available, as is the willingness. Let’s hope boxing doesn’t spoil the goldmine of talent in the super bantam and featherweight divisions.

Shane Mosley Wins by 6th Round KO Over Ricardo Mayorga

A Fight Worth Watching: Leo Santa Cruz vs. Abner Mares