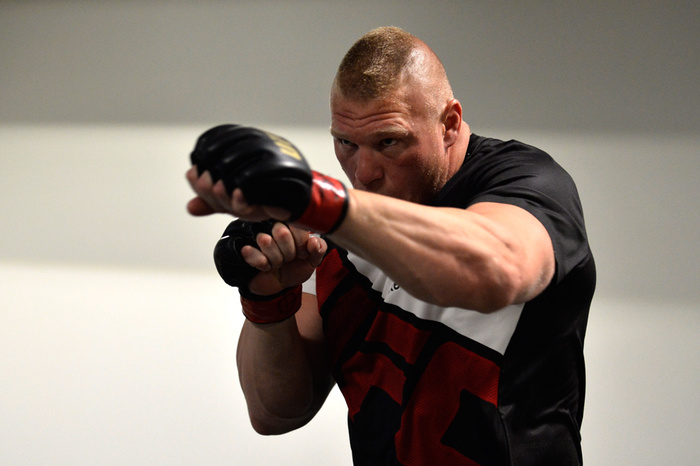 Brock Lesnar returned to the UFC last Saturday to save UFC 200. Coming back on short notice, presumably after much back stage favor asking between the UFC and the WWE, Lesnar got the better of Mark Hunt in a hard fought three round decision. Was it what most fans were hoping for? Probably not. But for a man who had taken five years off, and who accepted a fight on short notice, it was remarkable. Factor in that Hunt is a top ten ranked heavyweight and it becomes even more astounding. But that is Brock Lesnar in a word: astounding.

There are still those who are desperate to call Lesnar out as afraid to get hit but when stood in front one of the heavyweight division's hardest hitters, Lesnar looked relatively calm and did a great job of stiff arming and getting his head down behind his shoulders when the punches came in. Nonetheless, as I mentioned in my pre-fight, of all the fighters Lesnar has a good chance at beating on his wrestling alone, Mark Hunt is probably the most highly rated. Lesnar could probably batter a Bigfoot Silva, Frank Mir or Roy Nelson without much trouble but dealing with Overeem, Velasquez, Dos Santos or Miocic is a much tougher ask.

It is no secret that Lesnar has never been a complete product. When he couldn't power the takedown on Overeem, and when he couldn't flatten out Cain Velasquez, he became disheartened and was lit up with their superior striking games. But Lesnar clearly has an aptitude for learning so without pretending that a Jose Aldo or Eddie Alvarez like transformation from non-striker to an MMA boxing savant is likely, let's discuss a few things that Lesnar could do to make his A game more effective and threaten even the men who got the better of him in his MMA career. Ways to appear more rounded without actually being more rounded, or as I like to call them: Lesnar hacks.

The first part of Lesnar's game that could use some work is his boxing into takedown attempts. A great example of this is B.J. Penn. Many would say Georges St-Pierre but I am going to say he is not the best role model for Lesnar for the reason that his main weapon was the jab. Now the jab can be the most dexterous weapon in the striking arsenal but most wrestlers who learn the jab and shoot cannot use it that way. Jab and shoot is one of my pet peeves because the jab is typically used as a weapon to maintain distance or to hide a second strike. It is not a weapon which puts a fighter right on top of his opponent. I am sure that for life long wrestlers the similarity to popping the hand out there at the opponent's forehead is reassuring but it doesn't seem to work that way for most in fights. Roger Gracie is not a pure wrestler but is perhaps the most accomplished grappler ever and a great example of this. His jab and shoot tactics simply saw him get shucked off and then knocked out by King Mo. Not only do you have a good distance between yourself and the opponent when you shoot, if you only ever throw the jab out it belies your reluctance to actually strike.

If you want to get close enough to shoot, you have to get your hands dirty. Early in B.J. Penn's career he realized that a nice left hook was a perfect set up to the shot. If it lands on the guard, you know the opponent's hands aren't down by his hips and you can change level and grab onto them. It requires a fighter to be in closer than the jab so he can genuinely touch-and-go without having to cover a great distance, and there is some leeway if the opponent begins retreating or dropping his weight as he recognizes the level change.

Alternatively, Lesnar could look to Penn's rival, Frankie Edgar. Edgar used the dipping jab and body jab excellently to set up his takedowns. Dipping low with jabs to the body—which most fighters don't even bother defending until they start to ache—Edgar would occasionally pop out a jab to the head from his crouched position. Finally he would make as if to jab, and instead slam his palm into the shoulder or face of the opponent, forcing their upper body back and lightening their lead leg, which his right hand picked up. This has always been Edgar's favorite takedown attempt and he uses it to either sweep the opponent's standing leg, take the back, run through into the takedown, or follow up with strikes.

The most important lesson a wrestler can learn is that as scary as it is, a man is at his most open when he is punching back. Rashad Evans used to be excellent at throwing just enough to get a response from his opponent and immediately getting in on their hips as they threw back at him.

Building on that idea, now would be a good time to look at the Dagestani wrecking crew: Ali Bagautinov, Rustam Khabilov and to a lesser extent, Khabib Nurmagomedov.

Khabilov and Bagautinov can hit hard but don't really have the craft to box in on their takedowns. They also don't like having to take a fighter down while he is leaning on the fence, and then struggling to hold him down along the fence once they get him to the mat. The two back up until their opponent is chasing them, then step in to create collisions on the big punches, like a less refined Lyoto Machida. Retreat is the most direct control a fighter has on his opponent's movement because if you move back you know that the opponent will move forwards.

While Bagautinov has decked a couple of guys from there, more often they will start keeping their guard up high as they step in. This is where Bagautinov starts back tracking towards the fence. It is with their back foot to the fence that the Dagestanis shoot in on their opponent's hips. An opponent who has walked onto punches earlier in the fight will make sure to keep his guard up when moving in on a seemingly cornered opponent.  As we said before, a man who is throwing punches is a lot easier to take down. By setting up their shots from having their back to the fence, the Dagestanis are shooting into the middle of the cage and it would take some serious back-tracking for their opponent to get to his back to the opposite fence.

As Lesnar loves his right straight and is light on his feet for a big man—he even performed a sort of dart a couple of times in his bout with Hunt—he could do much worse than to look to the work of MMA's greatest heavyweight, Fedor Emelianenko. In his best days (before he decided he was a knockout artist, thirty fights and just a handful of knockouts into his career), Emelianenko paralyzed opponents with the right hand lead into the takedown. The right hand not only leaves less distance to close than the old jab-and-shoot, it also squares the body up for the clinch or shot. The three ways Fedor did this were to either uncork the right hand and then swim it under his opponent's left armpit for the clinch, throw the right hand and get his head in on a his opponent's right hip, or throw the right hand and then weave his head out to his opponent's left hip.

Additionally, falling into a clinch after throwing a power punch reduces the chances of suffering a counter—this is why many great boxers like Roberto Duran and Floyd Mayweather have utilized “punch and clutch” to throw a big punch and immediately hug their opponent and face no repercussions.

4. The Value of the Low Kick and the Low Shot

Another wrestler who had a completely different game to the strong clinch fighter, Emelianenko, is Kazushi Sakuraba. Sakuraba fought considerably bigger men and relied on the low single which took some timing to get to work. One of Sakuraba's favourite tricks was to kick his opponent's leg as hard as he could until they picked it up. If they didn't, he just kept at it. If they did pick that leg up to check, Sakuraba would feint a kick and shoot in on their standing leg.

Lesnar has a hurting low kick and a good low shot for a man of his size, there's no reason that he couldn't make this work or hobble some opponents while trying.

5. The Value of the Faked Shot

Brock Lesnar punches exceptionally hard on the feet or on the ground. If Lesnar could learn the value of level changing into punches he could probably deck many of the best heavyweights in the world. All the way back to Kevin Randleman's leaping left hook as Cro Cop attempted to sprawl on him, wrestlers have always had the ability to make even the best strikers in the world drop their guard.

Lesnar could go as simple as Johny Hendricks sole moment of success from UFC 200, slapping the opponent's lead leg with his lead hand as he ducks down, and then punching them over the top with the other hand as they withdraw that leg.

Or he could pick up single legs and drop them in order to strike. Matt Brown did this when he was having trouble landing blows on Robbie Lawler. Frankie Edgar makes good use of kicks of his takedown attempts too.

The wonderful thing about being known as a wrestler is that as soon as your knees bend, the opponent is going to set their weight, change their level and perhaps even drop their hands. Chad Mendes' level change to uppercut makes full use of this and he cracked the brilliant anti-wrestler, Jose Aldo as Aldo brought his weight down on Mendes' punch.

The king of the level change uppercut is Justin Gaethje though.

While he competes outside of the UFC I would rate Gaethje as one of the top lightweight talents in the world right now and would love to see him in with the big dogs of the division. Gaethje's style is about constant pressure and he is the epitome of the 'wrestle-banger'. Big hooks, big takedowns, level changes into uppercuts, and hard, hard low kicks from the outside. Frankly, if you are not big on MMA but you like Brock Lesnar, you will love Justin Gaethje.

Hell Gaethje will even hobble opponents with low kicks from the clinch. He's not a guy who jabs his way in or draws opponents forward and counters, he's a guy who started with wrestling then said “which strikes can I throw really, really hard?” and then found wrestling based set ups for those. Lesnar picking up legs and dropping them immediately to uppercut or throw a left hook would be tremendous to behold.

Gaethje dropping his man with low kicks from the clinch.

The other advantage of the uppercut for the wrestler is that when it misses it straightens opponents up and of course, the taller a fighter is standing, the easier it is to get in on his hips.

So there you have it. Five ways that Brock Lesnar could become a more rounded threat without ever actually rounding out his game or just five techniques to drastically improve the chances of an almost pure wrestler in modern MMA. Or as I will now be calling them, Lesnar hacks.

Aldo versus Edgar II: At the Mercy of Pivots Once More

How Joanna Jedrzejczyk Defended the Crown

How Eddie Alvarez Killed the King