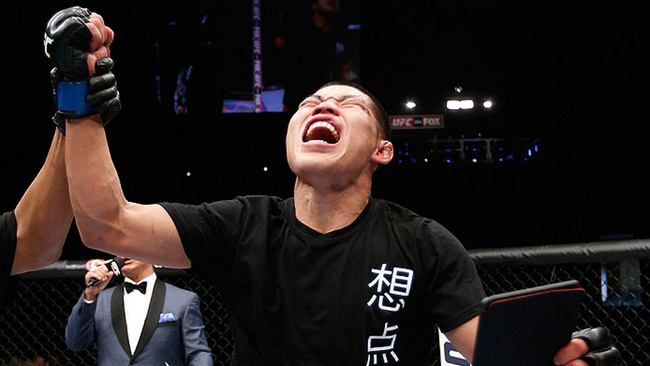 想点新的; want something new. It was the motto professed by Chinese welterweight Li JingLiang leading up to his American and promotional debut at UFC 173; a simple phrase that, like many Mandarin idioms, carried a number of meanings.

Determined to make his mark on the international MMA scene, and bring honor to his teammates at Beijing’s China Top Team, Li strutted around the MGM Grand in Las Vegas during fight week, intent on discovering that something new he had been so desperately seeking since he began training in mixed martial arts over half a decade ago.

But midway through his bout with David Michaud, Li found himself caught in a rear naked choke, and his dreams of scoring a win inside the Octagon appeared to be fading, fast. That is precisely when the man known as “The Leech” summoned his greatest strength, remembering defensive ground techniques, unearthing new resolve and poise.

“On the ground I knew what to do to get out of the choke,” reflected Li. “I already knew I could get out.”

Surviving for the remainder of the second round, Li stormed out of the gates in the final frame. But again, it was Michaud who took the lead, landing a few elbows on the ground to open up a gash above Li’s left eye. And while many fighters would have faltered with blood flowing down their brow, impairing their vision, Li, who was cut for the first time in his eleven-fight professional career, found something new, working off his back to return to his feet, controlling the final minutes of the contest with some hefty ground and pound.

Li JingLiang, now sporting a t-shirt with his想点新的 catchphrase emblazoned down the side and clutching a ThinkPad from his primary sponsor, Lenovo, returned to the center of the Octagon, where his hand was raised after earning the split decision win, making him the first Chinese MMA fighter to record a UFC victory on American soil.

“My win today represents my chance to bring my team a win, and help them to fight and train better,” offered Li. “It shows that there is a chance to fight in the UFC … but that it is not easy.” 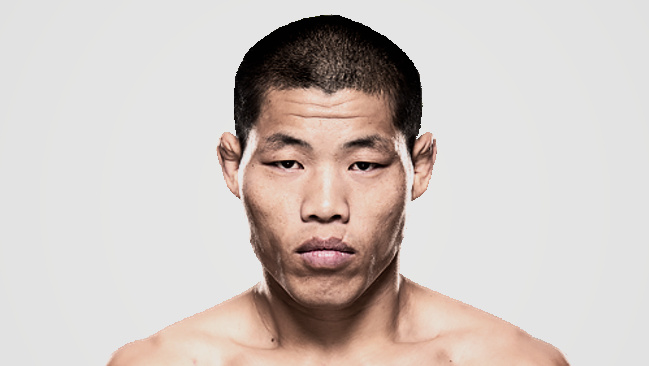 The rise of Li JingLiang from a small-town in western China’s Xinjiang province to Octagon prominence has already been documented; it’s the story of the best pound-for-pound fighter in the world’s most-populous nation. But it is only now, after scoring his first win inside the UFC, that he has cemented his place in the lexicon of Chinese MMA.

Following in the footsteps of friend and mentor Zhang TieQuan, the fist Chinese national to compete in the Octagon, a man who he refers to as 歌, or big brother, Li JingLiang patiently waited for his chance to one day show his skills and style in the world’s biggest MMA promotion. But it was never a certainty that he would ever have a shot.

Like so many Chinese migrants, Li, a former wrestler and Sanda practitioner, flocked to the country’s eastern shore for the disproportionately high opportunities offered in Beijing. Taking up with Zhang, Li found something new, learning the MMA trade in the underdeveloped Chinese scene.

Scoring a pair of wins in now-defunct national promotions like Art of War and UMAC, Li again discovered new techniques to add to his arsenal when Brazilian Jiu Jitsu coach Ruy Menezes moved to China in 2009, at the behest of Zhang, starting China Top Team.

A fast study, Li took to the ground game quickly, distinguishing himself as one of the nation’s most promising grapplers.

“The fist time I met Li, I realized that he had a great desire to win … he is very disciplined, he trains a lot,” offered Menezes, a disciple of Carlson Gracie who earned his BJJ black belt from the Brazil Top Team. “When Li came [to] train with me, he was very young, he was 20 or 21 years old. After two years, he was [a] purple belt in BJJ.”

Under the tutelage of Menezes, Li perfected the art of the guillotine choke, working his way up the ranks of the Legend FC promotion, another China-based organization that would eventually go belly up.

But back in 2010, all eyes in the Chinese MMA scene were focused on Zhang TieQuan, who, by then, had already complied a 1-1 record in the WEC and was set to make his UFC debut.

Zhang’s UFC career started with a boom in 2011, as the featherweight scored China’s first ever UFC win (in Australia), submitting Jason Reinhardt in just 48 seconds at UFC 127. But the victory would be his last, as the China Top Team founder struggled with international competition.

Perhaps it was too much too soon for Zhang TieQuan, but his experience inside the UFC served as a beacon for his younger teammates, namely Li, who used the pitfalls of his brother, along with the guidance of Menezes, to elevate himself to a title shot with Legend FC.

“What I’ve tried to do is emulate [Zhang] in training,” stated Li. “And in life I try to do a lot of things like he would.” 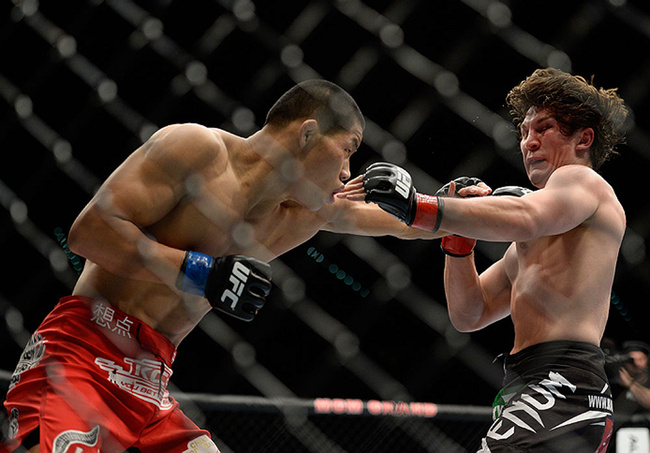 After failing to capture the Legend welterweight belt in his first attempt, Li returned to China Top Team, determined to improve his skills. But while teammates Yao HongGang and Amu Rijirigala were selected to fly to Las Vegas to workout at the UFC training center as part of an international development program, Li remained in Beijing, soaking up the lessons from Menezes.

“TieQuan opened the doors of MMA in China for the World,” explained Menezes, who has since returned to his native Brazil. “But I also was sure one day … Li [would have his chance].”

While Zhang TieQuan, the UFC’s first experiment to test the merits of Chinese MMA talent, would continue to labor inside the Octagon, suffering one of the most devastating knockouts of 2012, Li continued to ply his trade, rattling off another pair of wins to claim the Legend FC championship.

But just as he reached the pinnacle of his young career, Li was forced out of competition for over a year, as the regional promotion was unable to mirror the progress of its fighters, holding athletes to contracts but offering them zero opportunities to fight.

Again, Li JingLiang was presented with a new set of challenges. Again, he found something new.

“When you have the opportunity, you have to prepare and prepare. So when I had a year off with no fights, I was able to train really diligently. Zhang has had a similar experience so he could relate,” added Li. “I was training so that if the UFC would ask me at any point to fight tomorrow I could say ‘Come on, let’s go’.” 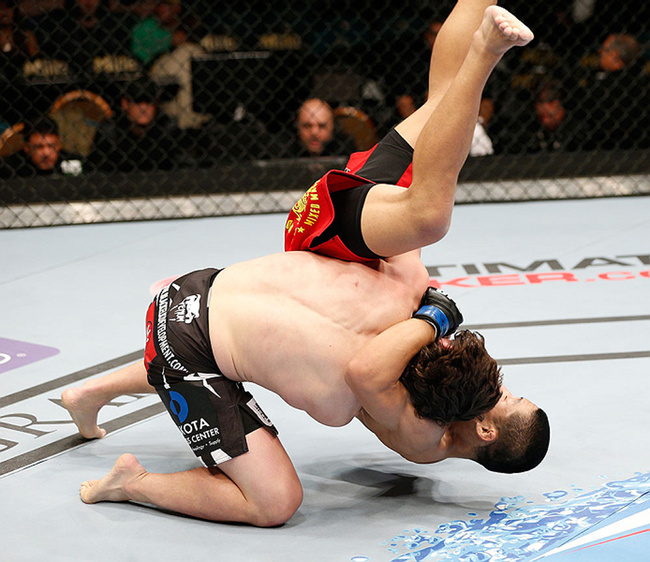 By this point in his career, Li JingLiang was already on the radar of former UFC scout David Stern, who praised the welterweight’s talent and drive. And once Legend FC officially shuttered its doors and granted Li his release, Stern was prepared to help “The Leech” reach his ultimate goal.

“He’s somebody we watched for a long time, watched the evolution of his career,” commented Stern, who was in Li’s corner at UFC 173. “I really believed in him a lot from the beginning. At his weight class for sure he’s the best fighter in China … he’s the most well rounded and most talented fighter in the country right now.”

With Stern’s help, Li traveled to Las Vegas, along with Zhang, for his first professional training camp and weight cut, a vast improvement over his previous resources. Li was also partnered with coaches Jimmy Gifford and Ricky Lundell, who honed his boxing and wrestling skills, and helped devise his game plan against Michaud.

Li’s quest for new opportunities and challenges took him from rural western China to Beijing and Hong Kong, and eventually propelled him to unparalleled MMA success, unrivaled by any of his 1-billion-plus countrymen.

And while his journey is far from over, Li has not only inspired a nation of MMA hopefuls, but also his mentor, Zhang TieQuan, who hopes to return to the Octagon within the next year.

“Because we’ve trained together for so long, I feel very deeply [for him],” stated Zhang. “It’s an honor… we’ve come a very long way and I’m extremely happy.” 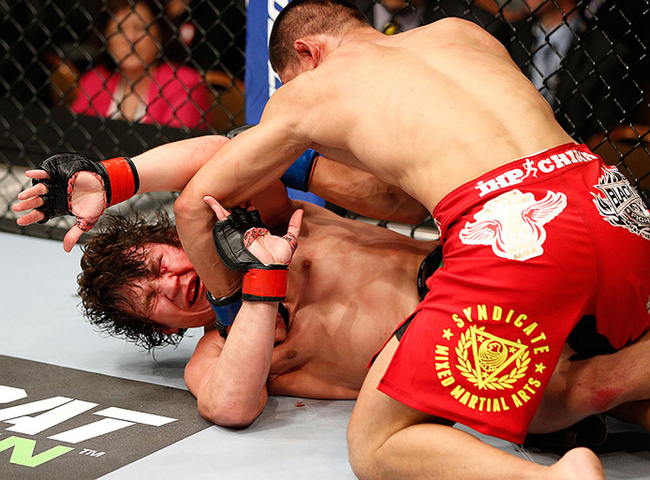 With his first outing in the Octagon a success, Li JingLiang has come full circle in his search for new opportunities, new experiences, new techniques, and new success. He’s also, not so secretly, hoping for a new fight on the UFC’s next card in greater China, which takes place in Macau on August 23.

But for now, after digesting so many new possibilities, he’s returning to an old favorite.

“Of course I miss China. I miss Chinese food. I miss my teammates, my comrades, China Top Team,” commented Li. “When I get back to Beijing, the first thing I’m going to do is eat my favorite lamb.”