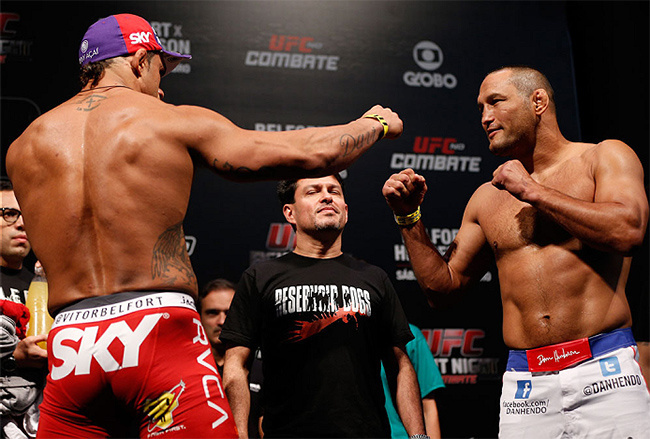 With the Nevada Athletic Commission voting to discontinue therapeutic use exemptions for testosterone replacement therapy last week, MMA fighters who previously benefited from the treatment suddenly have to decide whether try to keep fighting without hormonal help. Fightland spoke with Dr. Neil Goodman—a professor in the Department of Endocrinology at the University of Miami’s Miller School of Medicine, chairman of the Reproductive Endocrinology Scientific Committee for the American Association of Clinical Endocrinologists, and a practicing endocrinologist—about the origins of low testosterone in athletes as well as average men, the signs and symptoms likely to accompany withdrawal from testosterone replacement treatments, and his process for restoring adequate levels of the hormone.

Dr. Neil Goodman: I’ve been involved with professional athletes who’ve been referred to me by their agents to get them off steroids because they knew they were on them and going to get caught, so I’m very familiar with this. I think this is a problem in all of competitive sports in that a lot of these guys begin in gyms, they’re taking all kinds of anabolic steroids. Then they go off and go to the doctor, and their testosterone’s low. The original cause of low testosterone is that most of these guys in competitive sports are taking excessively high doses of almost anything they can get their hands on.

My committee is writing a guide for doctors to try to get them in line to do the right thing and make sure that the average guy who watches TV and goes to his doctor with somewhat low testosterone, if we can, we want him to come to us before they start putting him on testosterone for no good reason. We need to know why this guy would have low testosterone. Normally, it’s because these guys have some disease that’s causing the low testosterone, and if you help them with their disease, their testosterone [level] comes back to normal without giving them testosterone. Or, we give him a little bit of testosterone to get him through while we’re trying to fix his primary problem.

If a young guy comes in with low testosterone, my first thought is this guy’s been taking steroids. And I’m usually right.

Let’s take a guy that’s legitimately stopping testosterone. He goes to his doctor and says, “Look, I really need it because there’s something wrong with my testes,” he goes to a doctor, the doctor does blood [work], and sure enough, the guy’s testosterone is in the toilet because he’s been on it. When you come off of it, your testes are not working. And it may be months or years, or never, until they ever start making testosterone.

If the guy’s honest and he’s going to start working with someone like myself, we’re going to try the best we can to get him to normal testosterone levels. I’ll say to him, “Okay, what are you taking?” He’s honest with me and says he’s just taking injectable testosterone. I’ll say, “Stop it.” In a couple of weeks, I’ll do some blood work and see what his baseline level is after he comes off the stuff. Then I’ll put him on some gel that’s going to give him a steady amount of testosterone, bring his level up to give him a “normal” level of testosterone that he can stay on, let him have a chance to recover, and see what we can do after a few months.

Some guys, I can get their testes to start working again. We use a drug called Clomiphene, and for those guys, it wakes up the brain computer that runs the show because it’s been shut down. If I have a shot at them coming back to normal with tapering down their gel and keeping them on Clomiphene, over about three or six months or more, I’ll start to see their testosterone production come back. I do a lot of infertility work, and a lot of the reason that we’re treating these guys is because they want to have a baby: They’re making zero sperm because the whole thing is shut off, and over time, I might be able to get them to produce sperm again.

Their muscle strength will decline. They’ll put on some fat weight. Their moods will become depressive. They’ll have fatigue. It’ll be horrible—I feel bad for them. It’s going to be misery … I’m not saying all guys are going to have serious problems. It depends on what they’ve been on, how much they’ve been taking, what other drugs they’ve been on. It’s a mixed bag.

Any guy that’s coming off testosterone because of this ruling, he needs to see an endocrinologist. Do not go to any of these anti-aging guys. Don’t go to the family doctor. If he wants his health restored, he must see an endocrinologist. That’s my message, because that’s the only person with the training to help him deal with coming off the testosterone.

There’s no simple answer, but at this stage of reality, I think the only thing to do is have no performance enhancing drugs. I think that’s the only right answer.

The TRT Ban Arrives With an Iron Fist