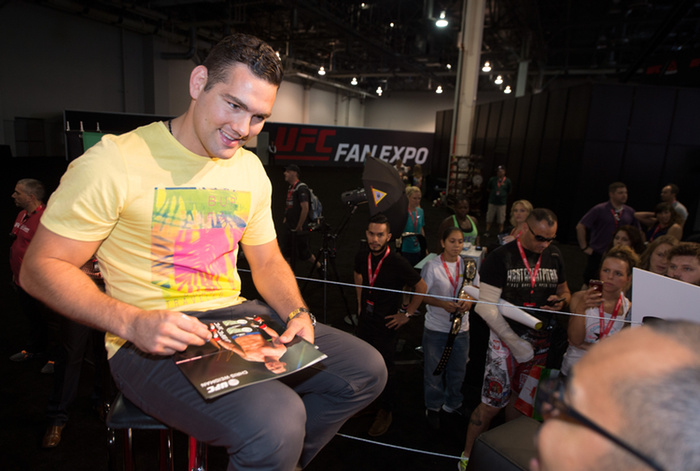 One of the main talking points going into Saturday’s middleweight title contest between Chris Weidman and number one contender Luke Rockhold has been the champion’s lighter weight.

Reports circulated weeks ago that Weidman was floating around the 190 lbs mark, which is very interesting considering that the middleweight king is one of the biggest fighters in the division.

Speaking ahead of the all-important UFC 194 co-main event contest, Weidman revealed that the new IV ban that came into action in October was the deciding factor behind him getting his weight down to such an extent ahead of the clash. The champion stressed how important it is for him get accustomed to the weight he will be fighting at, which should be considerably lower without the use of IVs in the rehydration process.

“I feel better than ever, I just, I really didn’t get out of shape between training camps,” explained the middleweight champ.

“I kind of kept myself low and then once I got to training camp, with the no IV thing, I just kept coming down and bringing the weight down. I’m obviously being looked after by professionals and making sure I’m doing the right thing and I’ve never felt better, so everything’s good.”

“I just wanted to get my weight down. You’ve got the IV ban and I like to train at my fight weight, the weight I’m going to be fighting at, so that’s really what I did.

Analysts and media members have unanimously agreed that Weidman and Rockhold could be one of the greatest middleweight championship matchups in the history of the promotion. As far as Weidman is concerned, he prepares for every single fight like it will be the toughest fight of his career, but the New Yorker did underline his belief that Rockhold is the best contender on offer in the 185 lbs bracket at the moment.

“I don’t know if he’s the toughest challenge I ever had, only on December 12th we’ll be able to find that out. He definitely is the toughest customer for me at this time, I think with what we have in the middleweight division right now, so I’m taking him very seriously.

“For me I prepare as if it’s the toughest guy I’ve ever fought every single time and the biggest fight of my life. This fight means everything to me, but I take them all seriously.” 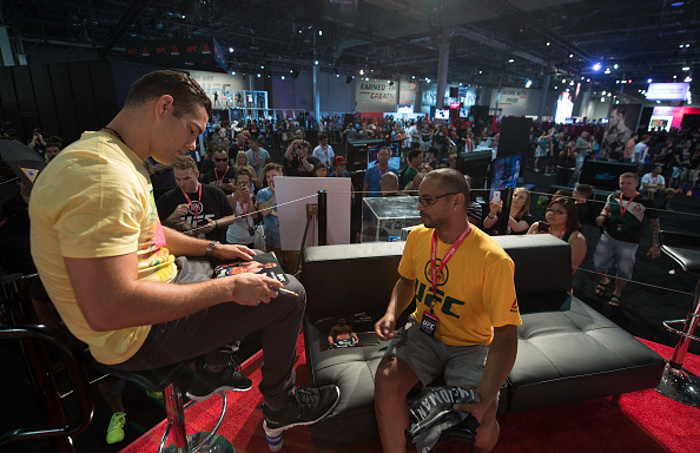 Weidman has beaten a who’s who of middleweight icons and although he believes he has fought fighters that are better in individual areas than Rockhold, the Ray Longo product is adamant that Rockhold is more well rounded than his previous opponents.

“With all due respect to Luke, if you were to put it on paper, Anderson Silva versus him or Lyoto Machida versus him, just in the striking department, you’d probably say that Silva and Machida have better striking. If you were to put Demian Maia in there with him, he’s going to have better jiu jitsu (than Rockhold). I’ve fought better wrestlers too, like Mark Munoz.

“I think Luke is more well-rounded. I think he has better wrestling than Machida and better jiu-jitsu than Machida. I think he has better wrestling and jiu-jitsu than Anderson Silva, so he definitely brings a different element to the game that I’m prepared for, and that’s different than a lot of guys I’ve fought. But if you were to break it down one element at a time I’ve seen it all.”

Weidman and Rockhold were on very good terms before the matchup was announced, but the championship duo has pulled no punches in the lead up to their title fight. When asked if it makes it harder to fight when you “get along” with your opponent, Weidman maintained that he views his fights as competitions and his relationship with opponents and training partners never impacts his performance.

He said: “I don’t look at fighting like I want to hurt Luke. I really don’t want to have to hurt him at all, to be honest with you. I don’t want anybody really to get hurt, but I spar with some of my best friends since I got into this sport. It doesn’t slow me down in sparring, you know, trying to just completely dominate them and break them mentally and physically every single time.

“It’s just a competition and I’m just trying to completely break these guys mentally and physically and that’s what I’m going to do on December 12th, so it’s nothing personal. Luke is a good dude, we always get along, and I’m sure we’re going to get along after the fight, so it just comes down to competition. We’re both two competitive guys that I think we’re the best in the world, and one of us is right, so we’ll see what happens on December 12th.”

Chris Weidman Wants To Be The Greatest Middleweight of All Time