Like Taking a Mountain Out of Your Heart: An Interview with Pornsanae Sitmonchai 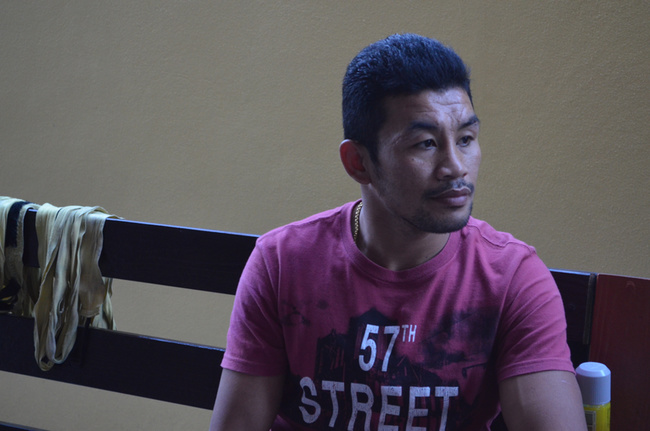 [Pornsanae Sitmonchai, one of the best-known Muay Thai fighters alive today, recently retired from fighting after a career spanning more than two decades in the ring. Currently a trainer at Evolve MMA in Singapore, Pornsanae came from humble roots in Thailand's Kanchanaburi Province and spent most of his fighting life training out of Sitmonchai Gym, also in Kanchanaburi.]

Fightland: Tell me how you started in Muay Thai when you were a kid.
Pornsanae: It started when I was in elementary school. My school was a temple school, and there were some fighters my age whom I'd see training. It looked fun so I asked my dad if I could start training too. So my dad took me to a local man who had his own small gym, someone named Samien Kongyo. He was a farmer but he knew a lot about boxing. He liked to watch fights, and he knew how to train. Maybe he was a natural. Anyway, he trained me for free, starting when I was 11, which was an older starting age than a lot of the other boys who were fighters in the area.

I had my first fight that same year, when I was 11. I won it by K.O. I had seven fights my first year before another gym recruited me. That was a bigger camp, Sit Roongap, and I trained there about two and a half years, starting when I was 12, and fought 30 or 40 times for them. I was winning a lot and that made me famous locally.

I divided my time between my hometown and the gym, which were about 100 km apart. I also quit Muay Thai for a while because it was too hard to balance it with school. When I wasn't training, I would see my older brothers training and that would make me miss Muay Thai a lot, so I decided to start fighting again.

I was so tired, though. School and fighting, together, it was just too much. I ended up dropping out of high school when I was in ninth grade because I was doing so well with Muay Thai. It was too tiring to try to fight full time and go to school full time, so I just picked fighting. I tried to attend tenth grade but kept failing classes because I didn't have time to study. I got my GED later.

I fought for my school team for a while, got gold medals for them. Finally I made the switch to Sitmonchai Gym around the time I was 15. That's where I've been ever since. 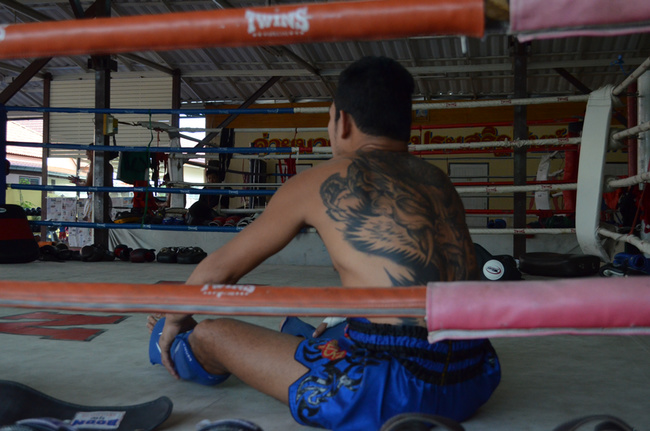 What were the benefits of growing up as a Muay Thai fighter?
You have a lot of responsibilities in Muay Thai. You learn how to handle everything you have to do, how to be responsible for yourself and be disciplined. You also train a lot, so you're healthy and strong. And you'll make lots of friends in the Muay Thai community. Your gym is like a family.

And then of course you make money off your career and maybe you can get famous. Probably the most important thing for every boxer is to become a champion. That's nearly everyone's goal.

You were extremely successful in your fighting career. What made you different from other fighter?
Everyone trains the same, but the difference is heart. I have always had a heart suitable for fighting. People may train hard, but often it's like they're just passing time. Like with running, they'll just run but they won't focus. For me, I think about fighting and I focus even when I'm just running. I don't just pass the time blindly.

The passion for fighting can't be created. Same with heart. It just comes naturally. You either have it or you don't. If you have the passion to fight, you will do it to the fullest extent, you won't hold back in any part of it. 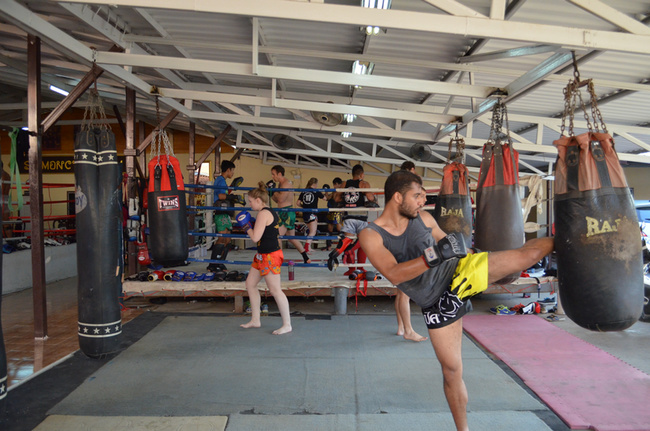 So other than your natural heart for it, what else helped you become a champion?
A lot of it was how I trained. That's the thing, you have to have both, not just talent, and not just good training -- if you have talent but you don't train, then it won't work. For me, I'm not a technical boxer, not very clever or smart with fighting like how someone like Saenchai is, but I have 100% heart, and I trained hard to be strong and stay tough.

Also, you need a good trainer. That's one of the elements necessary to make a champion. Both the fighter and the trainer have to be focused, be prepared, and be good at their jobs. Also, the owner of the gym has to provide everyone with good food!

Tell me about your training when you were still a fighter. How did you prepare for fights?
I think I was always pretty disciplined with my training. I stayed in shape by not drinking or smoking when I was fighting. I ran in the morning too. A lot, I always ran a lot. And I just focused in general, kicking the bags hundreds of times, practicing simple stuff like that. 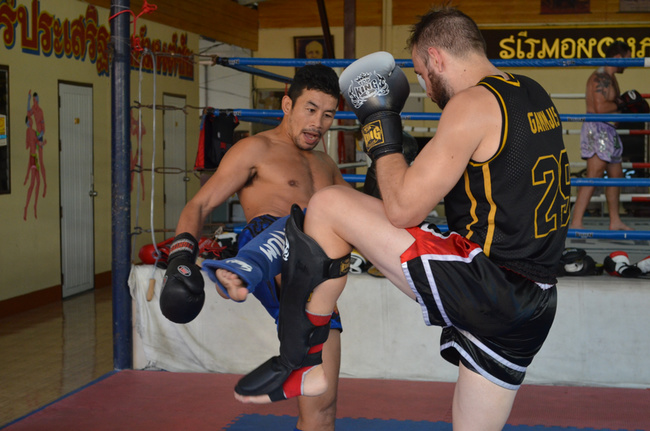 You're known as one of the most aggressive fighters around. How do you feel about knocking people out?
Relieved. (โล่งอก.) Satisfied. Completed. It's like removing a burden, like taking a mountain out of your heart.

You know firsthand the dangers, pain, and experience of being knocked out. When you were an active fighter, did you ever feel sympathy or worry about your opponents?
Yes, I worried about them, but this is a sport. This is just how it is. I was always happy to win, of course, but I wasn't necessarily happy to see the other guy on the floor.

Have you ever been afraid you or your opponent will die in the ring because of a knockout or other catastrophic injury?
No, not really. I've never been afraid to feel pain when I fight. And dying? It's extremely rare that someone dies in the ring. No one dies because of boxing; it's very safe. Maybe one in 10 million dies. What I'm more scared of is losing. 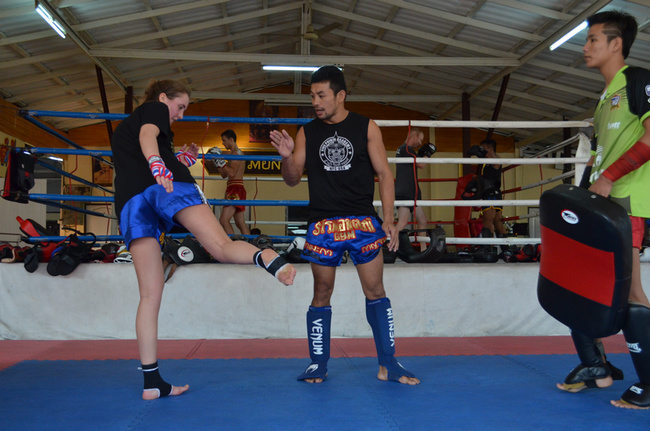 Then what do you think is the most dangerous part of fighting?
The poisonings, hands down. More dangerous than any injury in the ring. It's way different than being asked to throw a fight. If a fighter is asked to throw the fight, that's not dangerous because he's in on it. But if a fighter gets drugged, it's extremely dangerous. The boxer isn't aware of what's going on, doesn't know that he's being poisoned. It's hard to determine who is actually poisoning them, as there are so many ways to do it. You can buy stuff from the pharmacy, poison drinks at the dinner table, skin salves that are poison.

I was poisoned before, when I was young, about 19. Someone from the gym of my opponent did it, we all knew who it was but we just couldn't do anything about it at the time. I made it onto the front page of the newspaper for having been poisoned.

How has Muay Thai changed in your lifetime so far?
It's more closely tied to gambling now, more of a business than before. Gambling has always been a big part of Muay Thai but now it even influences the judges. If you watch boxing on TV you might think Blue should have won, just based on the fight, but in the stadium there are all these gamblers going for Red, and so the judges may give it to Red. It's not really correct sometimes, who wins and loses. 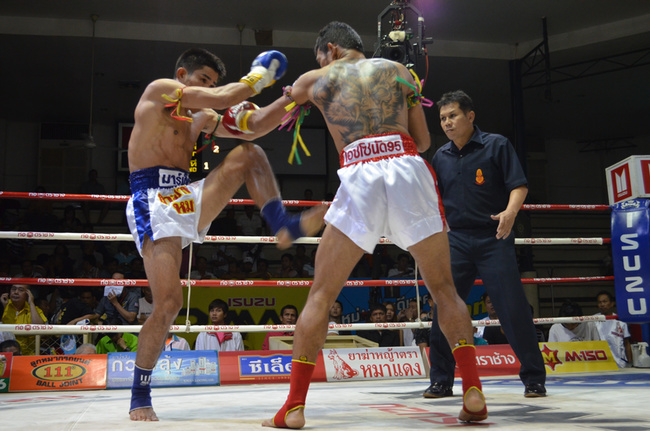 If you could do your life over, how would you live it differently?
I would want to be born to a rich family! I would have taken it easy, just lived a comfortable life.

But then you would have been missing out on all this, your boxing career, your fame, your recognition, everything.
That's true, I wouldn't know this life. But it would be easy.

If you had been born rich and had never become a Muay Thai fighter, what about this Muay Thai life would you have missed the most?
Sitmonchai Gym. Everything in my memory, the audience cheering, the belts, all that stuff, those are amazing memories, but in the end, Sitmonchai is my home.