LINE and MCMAP: The Martial Arts of the US Marine Corps 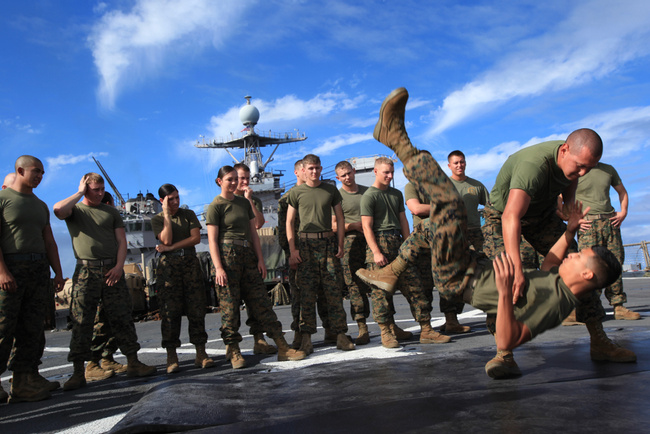 Every martial art is its own specialty and is designed to answer a specific situation and environment, its own unique set of problems. Some are designed for self-defense, some for sport, and some for fitness and others for varying combinations and permutations of all three. For the United States Marine Corps, their martial art needs require simple, relatively easy to master, techniques for life and death situations. In honor of Veteran’s Day, we took a look at two martial arts systems developed for use by the US Marines.

Between 1989 and 1998, the US Marine Corps used the LINE system to train more than 750,000 soldiers in the intricacies of hand to hand combat. LINE stands for Linear Infighting Neural-Override Engagement. The LINE system contains grappling and striking techniques resembling those of other martial arts, including wrist locks, standing arm locks, head stomps, eye gauges, knee strikes, groin grabs, foot sweeps and hammer fists. One of the interesting things about the LINE system is how it was taught. As the Marine combat instructors demonstrated and described the techniques to their students, they demanded a certain call and response, ensuring that their trainees paid attention. The Marines repeated the phrases, which describe the concepts and movements, as they performed them; “grab twist grab”, “slap and stand”, “grab twist pull strike”, “slide and hook”, “grab smash hook” etc. The repeating of these phrases, as the techniques were performed during training, was meant to accelerate and cement the results of the learning process.

All LINE techniques were relatively simple and tested in poor visibility situations. Instructors of the LINE system were required to pass an arduous battery of tests, periodically requalifying to teach throughout their teaching careers. Unlike civilian martial arts, were innovation is prized, LINE requires that all instructors teach the exact same techniques and use the exact same phrases and methods. Such standardization helped retain the system’s effectiveness in hand to hand combat for all Marines. The testing process for instructors also included a 4-6 hour aerobic and anaerobic workout, immediately after which instructors were expected to demonstrate LINE techniques with speed, power and precision. As effective as the LINE system was, it was officially discontinued for use in the US Marine Corps in 2001. With the issuance of MCO 1500.54A, LINE was replaced by a new system called MCMAP.

MCMAP stands for Marine Corps Martial Arts Program. Their motto: One Mind, Any Weapon. Whereas LINE emphasized close quarter hand to hand fighting, MCMAP addresses a “full spectrum of the force continuum” and “fulfills the need to build Marines with the mental and character traits required to succeed in the future.” MCMAP is “a synergy of mental, character and physical disciplines with application across the full spectrum of violence.” When we look at the official MCMAP manual, the new system looks a lot like LINE; except now the old curriculum has been rounded out with boxing, muay thai and Brazilian jiu jitsu. Rather than developing new techniques, MCMAP was created with the intention of getting the best techniques from various martial arts. MCMAP also includes weapons training and like more traditional martial arts even has a belt system.

According to MCO 1500.59, issued in November 2010, the color belt system is tan, grey, green, brown and black. At least 27 training hours are required for the lowest colored belt, tan. More than 100 training hours are required for the first degree black belt. Advancing from grey belt to first degree black belt requires not only a mastery of progressively more difficult techniques but study and participation in group discussions concerning the various warrior cultures of the world. The study of Marine Raiders is mandatory for advancement to grey belt, the Spartans for green belt, Apaches for brown belt and Zulus for black belt. MCMAP also requires Marines to develop a moral compass required to fight, as ethically as possible, in today’s complex battlefield.

Warrior Case Studies are guided discussions designed to help the Marine see convergences between a warrior’s individual actions and their own experiences in the Marine Corps. The rounded curriculum of MCMAP is not only a method for self-defense but a tool in fulfilling the Marine Corps goal in making Marines, winning on the battlefield and producing upright and productive citizens once their time in the Corps is over. According to MCMAP instructor, Lt. Col. Joseph C. Shusko, “Every Marine is a rifleman. Every Marine is a martial artist.” And like any martial art, the benefits of training in MCMAP transcend mere combat effectiveness. “I want the Marines who take this course and then return to duty feeling ‘Now people are safer because I’m here.'” Armed or unarmed, “from the halls of Montezuma to the shores of Tripoli," the US Marine Corps, the Devil Dogs, will always be ready to fight any enemy, any time, using every tool at their disposal and I’m grateful for it. Happy Veteran’s Day!