Liquor Stains and Incense: The Shaolin Temple in New York 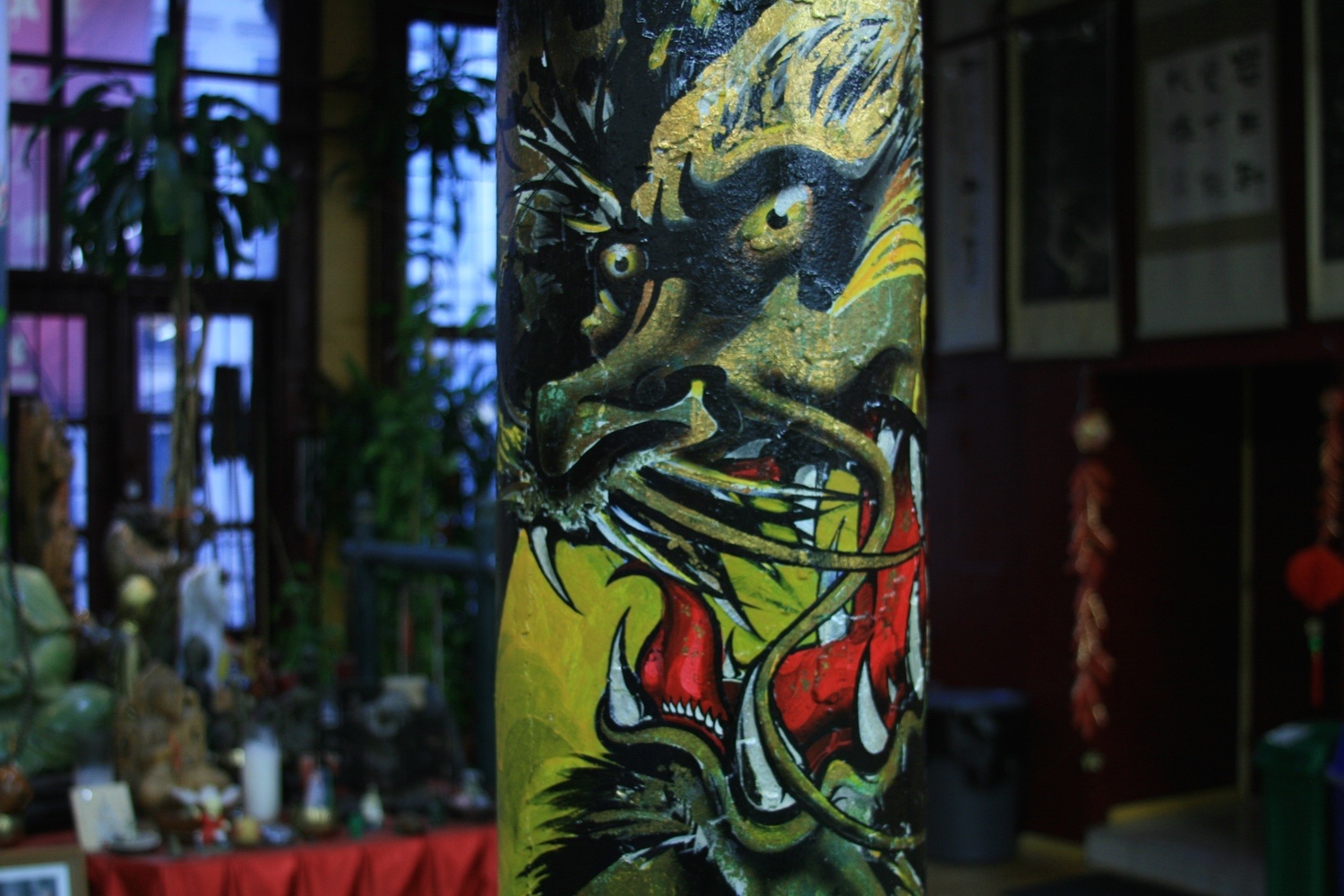 The USA Shaolin Temple on lower Broadway in Manhattan opens at 11:30am. Two students are there as the big hand strikes six and are buzzed in right away, a muffled "amitofo" crackling through the speaker. Up the rickety stairs to a small bench by the red door, a small mural of a monk on a yellowing wall. A girl with bright blonde hair turns her face away and laces up her big black boots. A boozecloud follows her down the stairs like a clingy ghost.

Outside it's a brisk New York morning and Corinne needs a cup of coffee to stave off a hangover from last night. She was up with Master Shi Yan Ming and the RZA drinking wine out of glass cups and just before the blackness took her, the master offered Corinne a mat to collapse on. She woke up to the first two students' "amitofo" and figured it was time to exit stage left. The master won't be back till later, his disciple Han tells me, so I head out with Corinne to find a hot beverage and discuss drunken monks and what happened last night.

Most stories about Shi Yan Ming involve at least the RZA or alcohol or both. He's a Shaolin monk with a movie script life story and a wall full of old school selfies with New York's coolest. There are a few with the RZA, including one from 1995 with the inscription, "positive energy activates constant elevation," a twist on "protons electrons always cause explosions" and slogans turned acronyms. Jackie Chan and Jet Li are up there, as are the rest of the Wu, Andre 3000, some famous people I didn't recognize, and Eva Mendes.

In each photo Shi Yan Ming's eyes are blazing with inner qi, as if he's about to burn a hole through you with laser beams. That look is known in the kung fu world as 眼神—yanshen or literally "eye spirit"—and a powerful martial artist is said to have eye spirit so powerful it can kill:

Warrior monks like Shi Yan Ming follow in the footsteps of the very first wild monks to stagger drunkenly out of the forest and pass out on the doorstep of the nearest temple. There has always been a yin and yang pull between the rivers and lakes of the world outside of the temple, and the quiet striving of the Zen tradition most closely associated with Chinese kung fu.

That ancient struggle is so deeply entrenched in Chinese culture, martial artists with no ties to any temple still use Buddhist terminology, revere the Boddhidarma figure, and engage in ritualistic drinking sessions. For Chinese martial artists, being able to drink all night and then get up and train all day, or at the very least get up and handle daily business, is a sign of strong qi, a disciplined mind, and a powerful body. There is another old Chinese phrase for these guys: 酒肉和尚, literally "wine and meat monk."

A "wine and meat monk" describes a monk so far down the road of self-cultivation that he can imbibe pretty much anything and it doesn't matter, because in his heart he always carries the Buddha. The classic mythical story of Ji Gong, the pauper monk who ate meat and coughed up live doves, is the template for the wandering wild monk more in tune with the true path than anyone can guess.

Corinne is glad to hear that wild monks are an old tradition and passing out drunk at your master's house is not taboo in China, that in fact it's a rite of passage. Mollified, she heads over to her day job practicing witchcraft for depressed women and hopelessly romantic gay men.

I return to the temple later in the day and find that Shi Yan Ming has not yet returned. A kid's class is underway, led by Han, and I stay and watch. Four children, two girls and two boys, burn off energy in the temple on Broadway under the wild eyes Master Shi Yan Ming and a hundred celebrities. They go through the stances, high kicks, some strikes from the bow stance ... one of the girls does repeated no hand cartwheels while the youngest of them, a five year old boy named Milo, squeals his way up and down the practice floor as his nanny looks up from time to time to smile. Han presses her charges to bend their knees a bit more, stretch those legs out and really slap that outstretched hand.

New York has this uncanny ability to help raise its children, even with the abyss stretching out all around them, around every corner. We're in a space up a spooky flight of stairs, where a Staten Island rapper, a renegade monk and a Brooklyn witch engaged in some late night ceremony under the watchful gaze of painted dragons and Zhong Kui, the Chinese king of the underworld. While massive hammers and swords are stacked in one corner beside an old screen with faded engravings of old Chinese gods, a table topped with serene Buddhist figurines and offerings catches the fading light of the day.

This is a spot both safe and wild, protected from on high and exposed to the grit of the world's greatest concrete jungle. There's yin and yang here, liquor stains and incense, death eyes and bright smiles. This is Shaolin and New York.

A Cat Who Can Catch Mice: A Closer Look at the Abbot of Shaolin