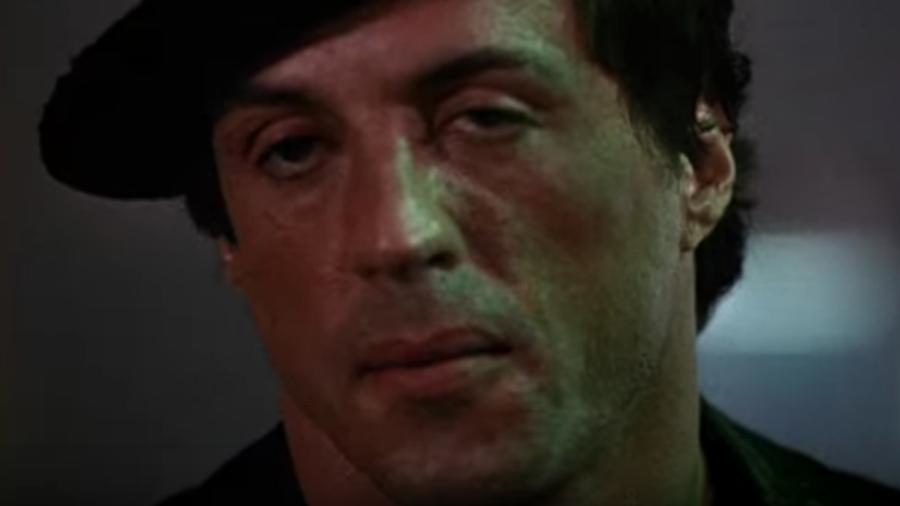 On Thanksgiving weekend, millions of Americans will come together to avoid the mall like it's full of radioactive wolves, and also to eat as much as they can with people who have the exact opposite political opinions. Millions of those Americans will go to the movies, and some of them will perhaps see the final installment of the Rocky Balboa saga, because they arrived thinking The Force Awakens opened that weekend instead of December 18. (It opens on December 18, guys!)

Creed actually looks like a decent movie, neither overly maudlin nor over the top—nor Over The Top, for that matter. The first trailer wisely downplays the Rocky-ness of the proceedings until almost the end, while trailer two is a Cliff's Notes version of what happened in the Extended Rocky Universe during the nine years between Rocky Balboa and this film. Paulie's dead, and Milo Ventimiglia and whatever kid played Steps seem to be gone, although Rocky's restaurant and vague neurological trauma are still there.

There is some fan service, most notably in a callback to the "Kentucky Fried Idiot" scene in Rocky II, but that might be pretty much all the humor we're likely to find in a film from the director of the madcap comic romp Fruitvale Station. Still, Fruitvale Station was good, and Michael B. Jordan—who stars in both movies, and also in my dream project Space B. Jam—is fantastic, so there is plenty of reason for hope. Most of all, we know that Creed will succeed, commercially and critically, if it avoids the pitfalls of what is almost universally decried as the worst Rocky sequel: Rocky V.

Everyone gets introduced to the Rocky Balboa Heptalogy in a different way; it was just horrible timing that Rocky V was the first glimpse for my sister and me. We were five and six years old, respectively. The first few minutes, repeating the very end of Rocky IV, gave us false hope that more of the same was about to happen, except maybe this time with Rocky beating an Iraqi boxer, or an Urkel boxer, or Kirby Puckett. It was 1990, so these fantasies made more sense to us than what actually followed: a dour film about a man's failing health, squandered wealth, and suffering family. It didn't help that Rocky V premiered on the same day as the family classic Home Alone—the Goodfellas to Rocky's Godfather Part III. For my sister and me, it would take Rocky IV to undo the disappointment of Rocky V and convince us to watch the other films.

As I said, Rocky V starts off with the fight from Rocky IV, minus the Fairlight synthesizer stylings of Vince DiCola and the "IF I COULD CHANGE AND IF YOU CAN CHANGE" speech that famously ended the Cold War. Stallone tries to make up for the clip job after the credits by showing his bare ass in the shower, which is a thoughtful gesture, but also too little, too late. When we first see him, Rocky's hands shake and his eyes resemble a raccoon's, and it's clear that we are in for a long, depressing slog.

After returning from Vancouver Pretending to Be Moscow in a sweet Ilyushin Il-86 Rocky holds a press conference. The proceedings are marred by talk of boxing's health crisis, and by a poor man's Don King—named George Washington Duke, because why not—trying to get his poor man's Mike Tyson, a.k.a. Union Cane, into the ring with Rocky for the Fight of Earlier That Year. Needless to say, "Lettin' It Go in Tokyo" is the last thing on Rocky Balboa's mind.

There are many reasons why Rocky V is more or less universally unloved, but Rocky's son, Robert Balboa, Jr., is easily the best. There doesn't seem to be any explanation for why Yung Rock would be so sullen, even before everything goes to hell, but he invariably is. Your dude makes Donald Trump faces as his parents dance; his most charming attribute is that he draws nude pictures of his buxom French teacher in a desperate attempt at justifying Rocky V's PG-13 rating.

The film's more depressingly Adult Themes do the rest of the heavy lifting there. After giving his son I Boxed To Make Your Life Better reassurances, Rocky learns that sweet dumb Paulie signed power-of-attorney over to the family accountant, who managed to lose everything. Reluctantly considering the offer to fight Union Cane, Rocky listens to Adrian's plea to see a doctor. Not only is he brain damaged but he picked the one year in boxing history in which no athletic commission in America would look the other way and let an obviously sick man fight.

And so Rocky Balboa has to go back to his roots, meaning that Rocky V has to actually film in Philadelphia. Balboa's few remaining assets include Mickey's old gym, which actually belongs to his son, and the house where Paulie threw the turkey in the original Rocky. A hungry Okie by the name of Tommy Gunn enters the picture, and Rocky takes him under his wing, mentoring the young fighter to the top. But Tommy Gunn feels burdened by Rocky's shadow, and finally leaves him for George W. Duke. An ill-planned visit from Santa Paulie on Christmas ends in a (verbal) fight between Rocky and his son, who feels ignored by his father, if not the by the bullies who torment him at school (among them Kevin Connolly from Entourage, intimidating as ever). Except for that one Christmas he solved the Cold War, the holidays are usually lousy for Rocky.

Son, someday everyone will agree never to speak of this film again.

The last twenty minutes or so of Rocky V almost singlehandedly bump the movie from a half-star to a solid one and a half. Father and son make up in time to watch Tommy Gunn beat Union Cane and give G.W. Duke all the credit. The notoriously easy-going Philadelphia media dumps all over Gunn, with several reporters at a press conference—including local legends Elmer Smith, Stan Hochman, and Big Al Meltzer, all playing themselves in every possible way—telling Gunn he's not the real champ. Duke manipulates Gunn into challenging Rocky for the title, and an ensuing confrontation at a local bar gets ugly once Paulie goads Gunn into punching his former mentor.

The resulting fracas between Gunn and Rocky is almost too good for Rocky V. Rocky gets in a few punches before Gunn just goes apeshit, not only on Rocky but on half the Unsilent Majority crowding in on them. TV cameras are on hand to capture this somehow, and were this actually on the Philadelphia local news in 1990, my whole family would've taped it to watch on holidays.

The camerawork is great, especially when you get into Rocky's head and see the fear and motivation driving him. It doesn't hurt that Burgess Meredith appears one more time as Mickey, paying off what was a rather disappointing cameo earlier in the movie. Rocky wins, because him being beaten to death on a sidewalk by a be-mulleted Tommy Morrison would've been the biggest "fuck you" to a beloved franchise in Hollywood history. The movie ends with Rocky and his son atop the museum steps, alongside that statue of him that is discreetly pushed to the side most of the time. Then it's time to cue the Elton John music, complete with the lyrics "that coat which fits you like a glove."

Wrestling legend Terry Funk is said to have helped Sylvester Stallone choreograph the climactic street fight, which makes sense given both Funk's long working relationship with Sly and his status as the greatest hardcore motherfucker the world has ever seen. Knowing what Terry Funk can do, it's kind of sad that Stallone and Morrison are merely fighting in the streets, and not in a no-rope barbed-wire exploding death match. Let's assume there were budgetary considerations.

When you can't believe how disappointing the sequel is.

John G. Avildsen, who directed Rocky, was brought back to helm Rocky V, but it's not his fault that this movie fails to recapture the milieu of lower-class white Philadelphia as well as the original did. You could make an argument that any number of directors deserved the Oscar that Avildsen won for Rocky in 1976, but he is still very good at his craft. His stamp is clear on minor and not-unproblematic classics such as Joe, Save the Tiger, and Lean On Me, as well as the original Karate Kid and its first two sequels. The fault of Rocky V largely rests on the script, which was written by its star.

Sylvester Stallone has apologized profusely for making Rocky V, both in the media and through the retconning and lampshading that made Rocky Balboa a better and far less depressing movie. His performance as the title character is good as always; selling out and phoning it in are two different things. Talia Shire is less the Adrian we know than a shrill voice telling her husband what he doesn't want to hear. Paulie is still Paulie, and while fucking up the family fortune is not nearly as fun as trying to seduce a robot, Burt Young is still good as the comic relief.

Richard Gant isn't too good as private label Don King substitute George Washington Duke, nor is Michael Williams especially memorable as lispy heavyweight Union Cane. Tommy Morrison, who would go on to win the WBO and IBF titles later in his career, does what he can with the material, and it's sad to think of what he could have been, as a fighter or an actor, instead of a HIV-positive AIDS denier who passed away in 2013. Sage Stallone, who plays Rocky's son (and was Sylvester Stallone's son), also had a short and sad life. But 1990 was the Year of the Celebrity's Child Acting Horribly in a Parent's Lesser Sequel, and compared to Sofia Coppola in Godfather III, he's okay as Rocky, Jr.

Among Rocky V's many flaws, the largest is how it feels less like a Rocky movie than overdue homework. At an overbearing at one hour and 44 minutes, it contains enough plot for two or three horrible movies spread out over a couple of years. It not only almost killed the Rocky franchise; it nearly destroyed my love for the series before I even got to the talking robot or Mr. T's in-ring interviews. Rocky V does rally at the end but ultimately loses in a unanimous decision.

Rocky made me want to follow my dreams, even if I fell short, and its far inferior but mostly enjoyable sequels made me want to achieve my dreams, stay hungry, and avenge Carl Weathers' death. All Rocky V made me want to do was punch every male character in this movie and flip the bird to Adrian. The only expectation I have regarding Creed is that it will be better than Rocky V. May God have mercy on us all if it fails to clear that low bar.