Luke Barnatt Has Some Career Advice for His Fellow Fighters 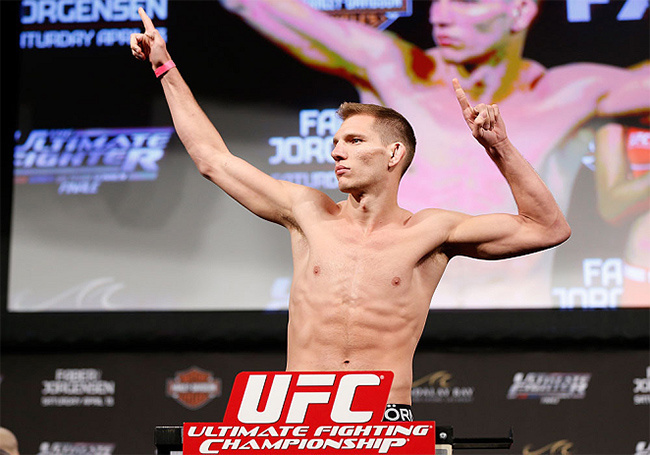 UFC rookie Luke Barnatt is already a big presence in MMA. The 6’6” middleweight was top pick for Team Sonnen on The Ultimate Fighter 17 and partnered with a coach who shared his love of trash talking and self-promotion. So far the Brit has made headlines slamming the management company of rising star Conor McGregor and earning $20,000 in sponsorship money for his last fight despite "only" fighting on the undercard. He tells Fightland how and why he does it … and what’s wrong with everyone else.

Fightland: You worked in marketing before turning to MMA. Has that helped you manage your career?
Luke Barnatt:It certainly has. The UFC has guys like Nate Diaz, who’s had a lot of fights and is very well known but who got paid 15 and 15 [$15,000 to show, $15000 to win] for his last fight. He’s not making crazy money.

To be able to market yourself through media outlets and talk to people, that’s where you make the money. My pet hate about UFC athletes is that they moan that the UFC doesn’t pay them enough money. I’m like, “No, the UFC pay you fine to go in there and compete. They also give you the biggest thing you’re missing out on, which is a vehicle to promote yourself as an athlete.” The UFC brand is so huge now that you can do so many things to make money outside of the Octagon.

People compete three times a year on average, so you’re working three days a year in the UFC. There’s another 362 days where, what are they doing? Why aren’t they making any money? What I realised very early on is that if I want to make money I’m not going to make it just fighting guys.

I used to attack my opponents quite heavily in interviews. There was one guy I fought who I thought was going to cry when he was talking to me after our fight. One of the comments I made was “After this fight you’ll realise you’re not on my level. A year later you’ll be sitting in the pub with your mates watching me fight in the UFC saying, ‘I fought that guy once!’” Obviously it’s come true now.

I used to act out at weigh-ins, I used to push people. I was a bit of a dick, to be honest. Not in an unprofessional way; it’s just a way of intimidating your opponent and getting under their skin. That side of me will come out in the UFC but I also know I’m a newcomer at the bottom of the stack at the moment, so I need to work and earn the respect to be able to do that.

I think people make the mistake of doing that too early and get criticised for it. A guy who’s doing that right now is Conor McGregor. He’s had two fights in the UFC. People love him but people will love to hate him in a couple of fights if he doesn’t deliver the goods. I hope he delivers, though. He’s another European guy. I think he’s very entertaining and that he’ll do very well, but he’s put a lot of pressure on himself very early on.

You were very critical of his management company and accused them of inflating their fighter’s Twitter followings. Did people miss the point of what you said?
One hundred percent. I never imagined I would get such a response from a comment about Conor. I didn’t attack him. The guy’s a featherweight. What’s that plan? Cause a beef?

I quite like the guy. I’m a fan of his. I was coming from a marketing background with what I said because that’s how it affects me. If I’m a company investing time and money into a UFC athlete under false pretences, it’s not cheating the fighter; it’s cheating the company getting involved.

The big, big problem with guys in the early stage of their career is that they don’t realise what that does. By cheating these companies the companies will think that these people are a joke and that the UFC’s a joke and they won’t invest again. We’re lucky enough to have Nike sponsoring a couple of UFC fighters. If you want to go after the Fortune 500 companies, the big guys who are going to pay good money and get us to the level of other professional athletes, which we deserve, fighters need to realise that trying to take shortcuts and inflate who they are into something that they’re not will be negative for every fighter in the business.

Why do you think you and Chael Sonnen got on particularly well?
We both have a sense of humour and understand the big picture. Cameras or no cameras on The Ultimate Fighter, he truly was there for people like me. He didn’t give me advice on how to sell fights while we were on the show--we were concentrating on winning fights--but since then we’ve had some chats and discussions.

Recently I've been on BT Sport quite a lot, going on live TV, and it’s quite a big deal. I asked [Chael], “Should I do this, should I do that?” and he said, “Listen. Don’t do anything. That’s the secret. Pretend you’re talking to your friends in the pub and it will come off perfect.”

Obviously there’s an edge to Chael in some of his interviews and I’m sure he’s got some advice for that, but I've got that covered myself, don’t worry about it! I don’t think he’s ever gone too far in terms of his trash talking--if you take it for what it is, which is Chael being funny, the way I look at it. People who don’t see it that way and take it to heart, I can see how it hurts, but in my opinion they’re taking it too seriously.

You’re very vocal and methodical about setting goals …
When I decided I wanted to do MMA I quit my job and moved into my gym in Cambridge. That’s when the goal-setting came in.

I started reading books that other people don’t read. They call them self-help books but I didn’t need “help”; I wanted to improve my attitude.

There are tricks to life and how successful people are successful. It’s not luck. The more successful people I meet and the more conversations I have the more it drives me. After I read The Alchemist by Paulo Coelho I transitioned into believing that I could do anything I want to do if I set my mind to it.

Chael also taught me a lot about that side of things. Life lessons from being around him and seeing how he deals with situations. I’m very intuitive; I pick things up like that very quickly.

Have you always tried to stand out?
Growing up, I never really fitted anywhere and I felt like it was very hard to be different. When I was 12, 13, 14, I wanted to fit in and then I realised that the only way to be successful and do something that impresses people is to do what people aren’t doing.

That takes a lot of strength and a lot of character and I got that from my mum. She does something very different and a lot of people make jokes about it, but my mum’s a Jehovah’s Witness. She’s given up a lot for her faith. She had to give up Christmas. That’s a hard thing to do when you’ve got three kids! Seeing her do that gave me the strength to be an individual.

The Benefits of Being a Big Mouth