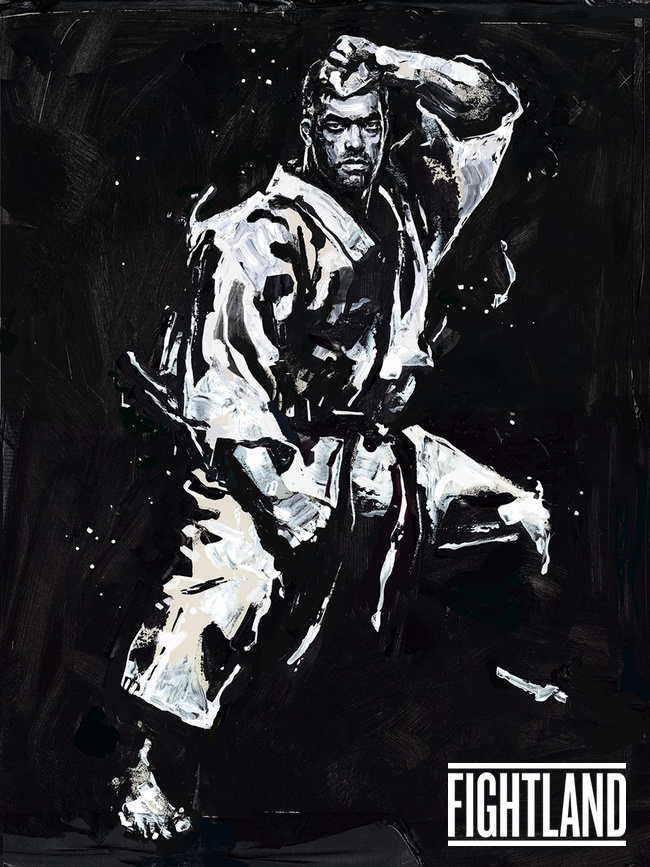 The incredible distancing and movement of the former light heavyweight champion, his tremendous ability to lay traps and close the distance with speed, his beautiful, minimalistic counter striking game: all karate 101. So if competition karate birthed the great Lyoto Machida—unarguably one of the most skilled strikers in the sport's history—should we be looking at competitive karate to produce the next generation of MMA fighters?

It might well be, but good luck scouting it out because competitive karate is almost universally awful to watch.

Traditional karate competition (Shotokan, Goju-ryu, Shito-ryu, etc.) is divided into kata and kumite, or forms and point sparring. Kata is essentially theatre, and focuses on low stances and long pauses.

Kumite is about hitting and not getting hit.  That sounds like a great idea for any martial art though, right? Boil any fighting art down to its basics and it's about attacking without experiencing any nasty repercussions.

Unfortunately, treating all connections as equal has pretty much destroyed every point sparring competition you can name—from karate to fencing. Applying the weight for a hurting blow and flinging the arm or foot out for a “Tag! You're It!” connection are very different movements. When all connections are equal, as under the electronic scoring of Taekwondo, the powerful round kick becomes secondary to the hilarious 'rabbit kick', a hopping heel to the back from a clinch.

Karate is much the same. Ko Matsuhisa gained acclaim for scoring with a scorpion kick against Rafael Aghayev. Of course, the actual kick was a glancing, spasmodic mess, but it scored as if were not.

The Aghayev Clinch and the New Meta

All of that aside, there are areas which one can appreciate in point sparring. In karate, strikes delivered to a tripped, thrown, or swept opponent have always been scored extremely highly. Consequently, many karateka have focused on getting in with punches and immediately transitioning to a throw. As karateka wear the gi, this can result in some diverse judo techniques in a striking environment.

Rafael Aghayev, while often undersized, is extremely good at bursting in on taller opponents and achieving a similar position to what I call the Jack Johnson clinch. Either controlling the gi sleeves at the biceps or the wrists so that the striking game is stifled.

From here he can push the opponent away while holding the gi sleeve at the biceps, stretch the opponent out and pulling Aghayev into a roundhouse kick to the exposed ribs.

Or over the arms to the head:

He can push away and score with the ludicrous hook kick.

He can transition to a hip throw. Which he'll do just as happily from ducking in on his man's hips.

Or he can hit his signature Sasae-tsurikomi-ashi. This trip, like hiza-guruma or the 'knee wheel', is about drawing the opponent's center of gravity past his lead foot, while blocking that leg from stepping to catch him, resulting in a fall to the ground.

There is certainly an appreciable and transposable art in Alexandre Biamonti's back heel. Feinting to move forward, then retracting his leg across his body so that it is in position to reap the opponent's lead leg when he follows.

The Good and Bad of Tournament Meta

Both Biamonti and Aghayev are talented, thoughtful martial artists. Both are also guilty of gaming the touch tag rules and playing up non-existent scores for the judges as anyone else in the point sparring game. Both rely on the kind of hook kicks that couldn't do damage if they needed to, both stop fighting as soon as they've landed a blow, with no regard for their own safety. Both work almost completely without effective combinations.

The hook kick, in karate competition, scores exceptionally highly. Consequently, they are thrown frequently and wildly, with the intention to tag, rather than to hit. If you look at Larry Kelly's hook kick, then at the ones Biamonti was throwing out, you realize that it's not a case of him “pulling” the kick for point sparring, he couldn't put weight into that probing reach if he wanted to.

Larry Kelly turning through a kick.

Biamonti stretching out to reach.

The great danger of reaching on hook kicks, and of missed hook kicks in general, is that you have committed that cardinal sin of striking, allowing your kicking leg to cross your centre line. This not only puts you in position for easy slamming straight to side control, it also exposes your back.

On the subject of exposing backs, the point sparring system just produces an atrocious attitude to exchanges. A fighter will dive in with a straight punch to the midsection, then pull his hand back to his hip, and turn his back while shouting, to convince the judges that he totally did just score. Often both fighters will pirouette around the mat, mouths open, “selling the point”.

Here, a beautifully timed wedge throw is spoiled by both fighters pumping their hand out and back to their hip, ending in a pose off.

These aren't particularly egregious instances, but some karateka will actually turn their back, with their hands down, in range of their opponent. A terrible habit to encourage in any martial art. Even if you don't subscribe to the turn-and-point form of competition karate, the rules still channel a competitor towards neglecting anything past the first connection. Of course, in MMA and other combat sports a fighter might burst in with a perfect first punch, then get knocked out by a blind swing while his hands are down.

Any competition that breaks and then restarts at the first meaningful connection is not going to do much to teach a fighter about recovering from exchanges. Machida himself has alleviated this somewhat by using the Giorgio Petrosyan method of physically pushing his opponent away after connections, or by transitioning straight into a trip which will at least force the opponent to catch himself before attempting to fire back.

Karate competition is built around Gichin Funakoshi's assertion that the karateka should think of his hands and feet as swords, and on the idea of ikken hisatsu or 'one hit, certain death'. While the sport has turned into the game of tag I have criticized above, the tentativeness over allowing the opponent to touch, for fear of conceding points, is entirely responsible for Lyoto Machida's success. In competition, the karateka know that the go-to reaction to a committed attack is to counter with the rear straight.  Competition karate bouts between karateka of equal ability often become stalemates of bouncing, no-one wanting to make the first move across the gulf between them.

But against opponents who aren't as tentative? Men who will happily be the first to move, every single time? That is where Machida's power comes from. And because the opponent is so often moving onto his blows, he really does show that one hit, certain knockout power. It's not something he owns, it's something that his opponent's consent to by providing the force for collisions.

When Machida wants to close the distance on offense, he uses all manner of distractions to hide his footwork. The modern karate meta is about bouncing—bouncing on spot, side to side, back and forth—but small, bouncing movements. Bouncing with as little time off the mat as possible. But traditional Shotokan competition is still more into the heavy footed, sneaking up of the back foot. Starting in a long stance, if you can sneak your back foot in underneath you, you can keep an opponent in what he thinks is an appropriate range to stay on the end of your blows, only to leap in and surprise him.

You will routinely go to a tactic that Mas Oyama referred to as enshin, or pin-wheel hands. To quote Oyama: Enshin (pinwheel) gets its name from the way you constantly rotate your hands in a circular motion to confuse your opponent.

Similar to old adage about the duck being serene on the surface but paddling frantically under the water, the erratic, hypnotic movement of the upper body distracts from the lower body. Enshin is the poor man's substitute for a bouncing rhythm in the feet. You can establish a pattern with your upper body, which is completely removed from your lower body, allowing you to get ready and spring in whenever you like. Where a fighter who is rhythmical in his head movement or footwork will require more skill to change his rhythm and catch an opponent by surprise.

Famous instances of this hypnotic motion of the hands and then leaping in with the feet are plentiful. Fedor Emelianenko used to pinwheel his hands before throwing his right hand lead.

And against Zora Foley, when a young Muhammad Ali was struggling to get anything going, a few seconds of hand waving turned into his first effective flurry of the bout. This was a trick Ali went to when he was struggling to find his jab.

And Machida? Well it's constant. You will see him waving his hands from side to side, spinning round in circles, swinging them up and down. He expends more energy distracting opponents than actually punching, but it serves to set up those beautiful liver kicks. Famously against Randy Couture, Machida faked the same kick four times, waved his hands around, and suddenly jumped in with a nidan-geri or two-level kick that put the former heavyweight champion down and out.

The techniques used by Machida are simple, but numerous, and a good many of them can be found in the highest levels of tournament karate. As an exercise in elusiveness, there might be no better method than point sparring. If more fighters tried it, we'd see a much more thoughtful class of striker in MMA. But as a competitive martial art? The many ways to game the system and the pageantry of every attempted point makes it a little hard to enjoy.