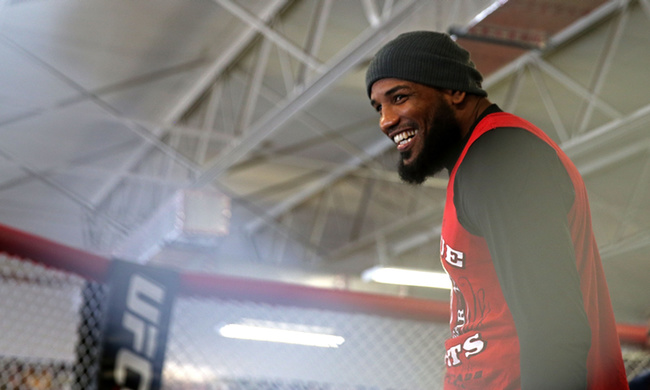 This weekend's pair of events hammered home that same truth which we seem to forget every few months: wrestling changes everything. From the uncharacteristically tentative and ineffectual performance of Lyoto Machida on the feet, to the shocking running knockout loss suffered by top flight kickboxer, Joe Schilling, this was a big weekend for the threat of the takedown.

The harsh truth of it is that an effective striker in MMA is just someone who hasn't been wrestled to the floor yet. If your game is on the feet, you are simply delaying a fall to the ground for as long as you possibly can.

Largely, this is the result of the judging, which has always seemed to favor the wrestler, but as of yet no reasonable alternative has been suggested. A fighter can out strike his opponent on the feet with precision and gusto for three minutes, be taken down and held there for the last two minutes of the round, and he will lose that round. Why? The takedown is decisive. One man is on top, both literally and figuratively. In the striking, it's a little more dynamic. You have to know what you're watching.

Is striking like Giorgio Petrosyan, with bite and accuracy but not necessarily putting anyone to sleep or leaving them on noodle-legs, worth more than laying on someone in half guard for two minutes? It sounds dismissive, but it's a serious question worth considering.

Petrosyan's opponent is being controlled by him in a sense, but has agency in every exchange. If you're Tecia Torres sitting on top of Angela Hill the other week, not giving an inch, you aren't accomplishing anything, but the opponent has very little agency in the direction of the fight. Controlling the stalemate is still better than winning exchanges on even footing, it seems.

Putting aside questions about the criteria and validity of 'octagon control', which psychics and shamans are perhaps better suited to answering than this humble writer, fighting an opponent who is constantly looking to get the takedown is a nightmare for anyone because the defending fighter is constantly one foul up away from losing the round. Even worse against top flight competition who can actually use their better position to rain down heavy leather or pass guard and begin a dominating climb to mount or the back.

The threat of a takedown, when convincing, can have a number of effects on the dynamic of the fight.

In Lyoto Machida's case, against Yoel Romero, it turned the normally reserved but always dangerous Dragon into a timid, jabbing, non-threat. Machida can't box, he can't even kickbox. He's a karateka who deals the big damage by drawing opponents on to single counter punches. He's not going to do cumulative damage by connecting fifty jabs or low kicks because he doesn't step in that often. And yet, those were all he was willing to throw at Romero. It was definitely not helped by Romero being a southpaw—the usual path of Machida's favorite long left body kick was gone, the hand fight largely disappeared, and the opportunities for the left straight off of the bat were far fewer.

You know you're out of ideas when you start looking for basic oi-zuki stepping punches.

The smaller cage played a far less important role that I suspected it would, as Machida was largely able to circle freely. Though this was more likely a shortcoming on Romero's end—I feel like Chris Weidman would have loved to fight Machida in the smaller cage. Though you could see other fighters, most notably Lorenz Larkin, backing themselves onto it all night.

Ultimately it was Machida's lack of meaningful hitting which allowed Romero to bite down on his gum-shield in the third round and simply run into a clinch with the former light heavyweight champion. From there the Cuban wrestler hit a knee tap straight into half guard and pounded The Dragon out with elbows before he knew what was happening.

But that was the effect of the threat of a takedown which failed to appear until the third round. In Joe Schilling's case, the kickboxer was striking with tremendous confidence early on, before being rushed to the fence and taken down, where he remained until the end of the first round.

The confidence of Schilling in round one, utilizing his usual faked push kicks, and easily evading Kato's counters.

The second round demonstrated the greatest strength of the threat of the takedown in a close match. It injects urgency and forces rushing from a normally calculating, methodical fighter. After a takedown has been scored, the fight clock becomes the literary ticking clock. The fighter is already down in a points game, now he's worrying about finishing the fight rather than just winning. Smart, experienced strikers have been easily tempted down the path of “I just need to land one good shot”. It's okay for us, viewing at home, to think that, but when a fighter begins to credit himself with just a puncher's chance, he's done.

Joe Schilling was, to his credit, not swinging wild. But his hands were at his chest, and his hips were low, he was ready to sprawl. When Hisaki Kato ran in with one of the clumsiest superman punches I've ever seen, Schilling looked exactly like Mirko Cro Cop against Kevin Randleman.

He wasn't reaching down or dropping his hips, he was just rooted there, frozen. As if he was going to sprawl but thought better of it and never got back into that movement he uses so beautifully on the feet. He's a guy who normally moves, but in that moment he was rooted to the floor. He seemed as confused as Kato, but as he resumed moving and winged out a left hook at the last minute, Kato's punch was already through. And that, more than anything, is the strength of the takedown. If you have the better wrestling, you have the power to confuse and freeze your man.

Schilling sets and drops his weight for a moment, before realizing he needs to move, but it's already too late.

You could see that exact same setting of weight whenever George St. Pierre crouched in slightly before springing up with one of his jabs. I am reminded of the story of the legendary wrestling match between Frank Gotch and the early twentieth century's Brock Lesnar figure, George Hackenschmidt. The two men had won every tournament under the sun and met in 1908 to decide the world champion. Hackenschmidt was a world class strongman turned world class wrestler. Gotch, meanwhile, was the student of the legendary Farmer Burns. He was technical and as nasty as a sack of badgers. In a match where he was considerably outsized, Gotch reportedly stomped on feet, butted, and even punched Hackenschmidt square in the nose in a constant hunt for openings.

Hack must have felt betrayed in a similar way many lesser grapplers do in MMA when they start sprawling on takedowns, only to find themselves getting touched up with strikes. This isn't striking plus wrestling plus submission grappling, this is wrestling with punches, and much of the time the man with the better wrestling is the only one who is free to hit. Any time the worse wrestler decides to punch back, he's opening himself up to takedowns.

That is especially noticeable when you have someone like Cain Velasquez in there with striker like Junior dos Santos.

Velasquez versus Junior dos Santos is the epitome of wrestling into boxing and vice versa, but you can see it just as clearly when you watch Stipe Miocic versus Mark Hunt. The simple act of going after a leg from time to time completely changes the dynamic of the fight. Every time Velasquez's head bobbed, Dos Santos' hands came down, and sometimes he'd stop a shot, and other times he'd eat an overhand.

And it works the other way, of course. My favorite example is Kevin Randleman's fake shot to left hook against Mirko Cro Cop, but you can just as readily see Chad Mendes crouch in low before throwing the overhand right—almost always catching his opponent as they attempt to sprawl in panic.

Yoel Romero has on other occasions paired level changes with flying knees and come down from flying knees only to go after his opponent's legs. His work against Machida before the stoppage certainly had some funky chaining of strikes and level changes. And I'm sure we all remember Fabricio Werdum's deliberate no-hope shot into rising knee that secured him the interim heavyweight title.

With UFC 189 just around the corner, and the skepticism over Conor McGregor's completely wrestler-free path to the title, it is a very common mindset to think that wrestling is just about stopping the shot. The Mark Coleman's of the world are not quite as scary any more and a tremendous wrestling pedigree can translate to nothing. But the commitments that anyone must make to fighting off a quality shot can be used by the great wrestler to create a game as unpredictable and dangerous in the striking portion of the bout as anything Anderson Silva or Lyoto Machida ever came up with.

Weighing the Options of Lyoto 'The Dragon' Machida