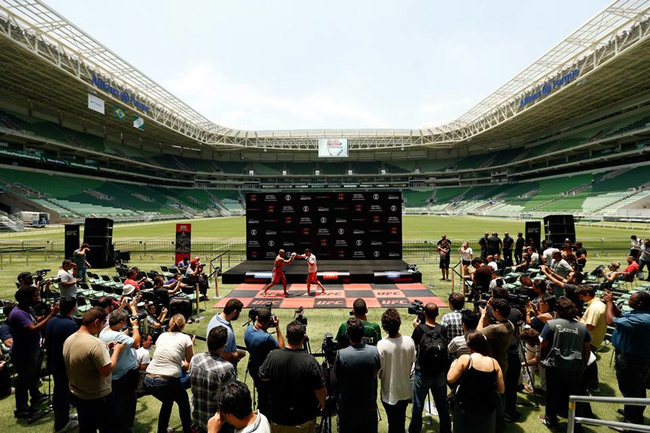 Spirits were high when the stars of this Saturday’s upcoming UFC Fight Night in Barueri, São Paulo, decided to put down their gloves and and cease sparring for a few moments to pick up a soccer ball and play around a bit instead.

On Thursday, the UFC held its traditional open workouts at Allianz Parque, a mammoth stadium that is home to one of Brazil’s most important and traditional teams—Palmeiras, o Verdão, or “Big Green”. UFC Fight Night: Barueri isn’t taking place in the stadium—however, the UFC is in negotiations with the company in charge of the building to set it up as what will be one of the biggest UFC events the promotion has ever put on. If optimally configured, the venue could host over 50,000 people.

Veteran and legendary middleweight and former light heavyweight Lyoto “The Dragon” Machida and his compatriot, former UFC Bantamweight Champion of the World, Renan Barão played each other in a friendly one-on-one soccer match. Barão played in his sandals, perhaps giving Machida the upper hand, as he emerged victorious following a slick dribble through Barão’s legs. In the interview that followed, Machida joked that he was working hard to join the ranks of Palmeiras’s squad.

About beating Barão and playing soccer, Machida said the following: “Partner, I zipped through his legs. I want to sign with Palmeiras. I used to play soccer a lot, but, because of the sport I practice now, I barely touch a ball. Soccer is a little bit violent as well. Sometimes you get hurt, so I prefer not to play around too much.”

Around 100 people came to see the open workouts, during which the American C.B. Dollaway and the Canadian Mitch Gagnon—Machida and Barão’s opponents respectively—joined the night’s other fighters in an open air demonstration.

Due to a technical issue with the stage that was put up on the grass, the fighters proceeded to showcase their skill-sets atop a mat in front of the stage. As it is Summer and as such it is hot in São Paulo right now, the tatami heated up and some of the fighters decided to perform their workouts atop the grass itself.

The fight itself takes place at Ginásio Poliesportivo José Corrêa, and it will be broadcast on Fox Sports 1.

Renan Barão: Inside the Pressure Cooker