Machida versus Dolloway: The Kick Heard Round the World 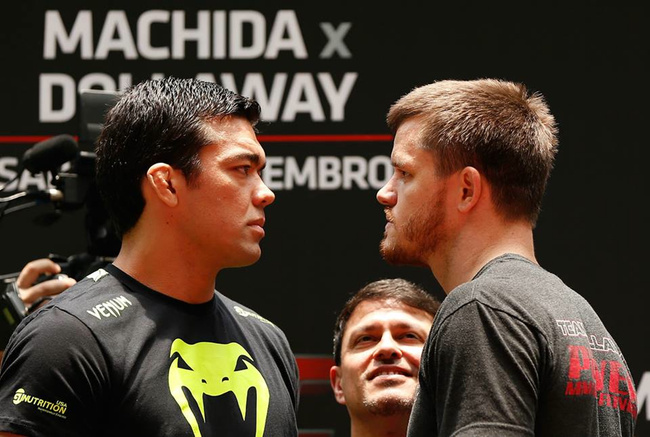 Last night's final UFC event of the year had my triangle sense on overdrive. Two arm-triangle chokes, a choke from the body triangle, a failed angle off into a left hook, another rear naked choke grip neck crank, and a beautiful triangle kick in the main event. So let's talk about the best bits.

The Art of Appealing to Patriotism

You know how Brazilian UFC cards work. It's either a couple of unknown Brazilians against each other, or a mismatch favoring a Brazilian star. It's pretty transparent, but it keeps the fans in attendance happy.

Often the mismatches will deliver. Placing Erick Silva in favorable match-ups might well become a tradition on UFC cards in Brazil. Last time Silva fought in Brazil, the UFC brought in the undersized Takenori Sato from Pancrase to sit on the end of Silva's kicks. This time, it was at least a UFC veteran. Though placing Mike Rhodes (0-3 in the UFC) in against Erick Silva (5-4 in the UFC and fresh off a war with top ten welterweight, Matt Brown) is only a little less blatant.

Silva, by no means known for his wrestling, immediately took Rhodes down, passed guard, picked up an arm triangle and looked to finish. Rhodes grabbed his own leg and attempted to kick down to relieve the pressure (a classic escape) but the choke was already in and the fight was over seconds later.

It told us nothing new about Erick Silva, it just made some locals happy. Frankly the UFC's matchmakers are doing Silva a disservice. His moments against Brown made it clear that he has the potential to be elite, but no-one gets better by taking easy fights and finishing them in the first two minutes.

Renan Barao's own tune up match worked out a little tougher for him than expected, though. Barao, coming off of the fight where he lost his bantamweight title, was matched against sub top ten Mitch Gagnon. But Gagnon did a fantastic job of making Barao's life hard. I've previously been critical of Barao's tendency to root himself to the ground and wait to swing a counter left hook, and where T.J. Dillashaw completely exploited it, Gagnon had a decent bash at it.

What Gagnon did so wonderfully was to stand out of kicking range, jab in, level change, and then either move into the single collar tie, or come up with the left hook. Gagnon didn't have much success in the clinch, though he got to it frequently. If Gagnon had just opened up with his free hand each time, rather than trying to hold a clinch he was never going to keep, he might have managed to get some damage off on Barao.

But he did have great success with his left hook. Between the clashes of heads and the left hook, Gagnon opened up Barao's right eye.

One of the most telling errors which Gagnon made was attempting to throw a long right uppercut and circle off to his right. The long uppercut is a slow punch anyway, and many fighters struggle to get their hand back to their guard in time. A famous example is that of Razor Ruddock versus Tommy Morrison.

But more than that, if you are going to angle off after a right uppercut, it is best to dart out to the left (as Gray Maynard did against Frankie Edgar) or weave out to the right.  In fact, any time you are in punching range and hoping to move out to the opponent's lead side, expecting the counter hook is key. If a fighter weaves out, the hook will fly over the top, if he just tries to dart out that way, he'll run right onto the hook as Gagnon did.

Funnily enough, the same hole created by the right uppercut got Barao's team-mate, Jose Aldo dropped by Chad Mendes' left hook. It's a slow punch which should either be used to hurt a ducking opponent, or create an opening for a body shot or strike to the head as the opponent stands up straight. Uppercutting and expecting to get off scot free demands a level of optimism which just won't carry a fighter to the highest levels of the game.

Gagnon finally gave it away in the third round as he held onto a headlock, looking for a head and arm throw. He was tripped straight into a leg smash pass and found himself on the end of another arm triangle choke. But it was far from a bad showing for Gagnon.

One of the real problems with developing a fighter is that an obvious flaw can be exposed in a fighter, and then be ignored by his next few opponents. Barao could have used the exact same one-note offence—jab, low kick, back kick—and a couple of counter left hooks to smash through Gagnon and get back to another title shot, only to lose to Dillashaw just the same way. Seeing Gagnon trouble Barao so much with feints, head movement and footwork, even as a middling striker, was pleasing. Barao must now accept that he has some real work to do, rather than simply being propelled back into another title shot as we see far too often.

The mismatch in the main event paid off, though. The second best middleweight in the world, Lyoto Machida, wiped out the fringe contender, C.B. Dolloway in 62 seconds. Watching this match reminded me of how far Machida has come. This was a guy who pretty much only had a reverse punch and some great timing to start with. His left foot has become something to marvel at. The kicks come right out of his stance, they come in at weird angles, and they're always well timed.

In karate there is the idea of kyo, something I was writing about at length this week, but actually abandoned in order to publish my Karate's Holy Trinity. Kyo is a moment of weakness in an opponent. When he is recovering from an attack, when he hesitates between techniques or mid combination, when he is breathing in or recovering his guard.

Dolloway pawed at Machida's front hand and circled. As he did so, Machida backed off, bringing his feet in close, ready to push off and circle. As Dolloway stopped chasing, Machida planted his lead foot back into his stance and immediately kicked. He found that unguarded moment just as Dolloway was moving back into his guard, set Dolloway into a panic, and it worked beautifully.

Notice how Dolloway, sensing the return, brings his right arm forward. His elbow leaves his side for just an instant—the instant when the kick lands.

The timing had to be good because Machida's kick was a form of sankaku-geri. A triangle kick or a diagonal kick. It goes up through the body at a diagonal and rises up underneath the opponent's elbow (or occasionally round if you use the ball of the foot). A hybrid strike: it's not a round kick, it's not an front kick, it's the middle ground, and it connected with the top of the foot. If he'd timed it wrong, Dolloway's elbow could have easily broken Machida's foot, and I can guarantee you that Machida has dead legged himself on a dozen different elbows over the years in training developing that kick.

That's the beauty of great timing, it enables the most basic techniques to work in ways you wouldn't think they could. From defence, straight back into stance and through to offence. No pause, no extra step, no tell. Just lovely stuff even against a clearly overmatched opponent.

You'll see a few fighters out there who are focusing on the finer points of timing rather than set ups and combinations. There's no saying that it's right or wrong, it's just different, and in many cases more difficult. Anthony Pettis' leading with a rear leg round house kick is similar. The mechanics are different to Machida's, but it too is all about timing.

This was the last UFC card of the year, and it wasn't brilliant, but it had a lot to live up to, following Miocic versus Dos Santos. The UFC returns on January 3rd for Jones versus Cormier. In the meantime, enjoy your mince pies, your family, and your presents, and stay tuned to Fightland. Tomorrow I will be announcing my Slackie awards for awesome techniques in 2014, and later in the week, we'll be publishing Killing the King: Jon Jones.

The Mentor and the Myth: Yoshizo and Lyoto Machida