Mackenzie Dern Carries Great Expectations, Gets Submitted in About a Minute, and Everything Is Fine 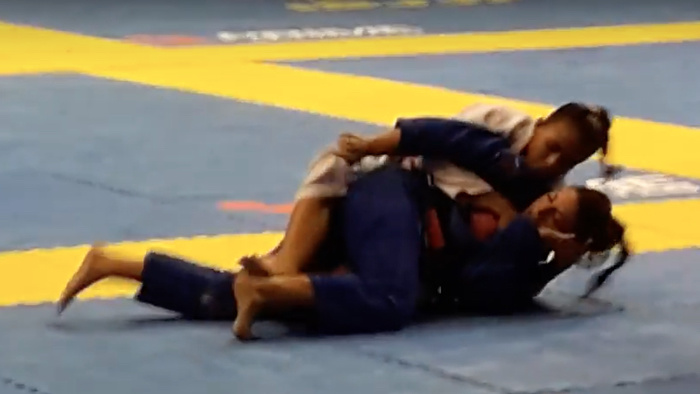 MMA's hive mind has decided that it desperately needs a classically attractive female to fill the Ronda Rousey-sized void in its heart, so we've looked to Mackenzie Dern, the 24-year-old multi-time Brazilian jiu jitsu world champion who's 3-0 in her rookie year as an MMA fighter. Now we find out if that sense of excitement fares when clouds appear in the forecast.

On Saturday, just over three weeks after her decision win over Katherine Roy at Legacy Fighting Alliance 6, Dern returned to the world of sleeve grips and skirt chokes at the Rio Falls jiu jitsu tournament in Rio de Janeiro, where she met Beatriz Mesquita in the absolute division’s finals. It did not go well: the multi-time world champion Mesquita outweighed Dern, passed her guard, took her back, flattened her out, and finished with what looked like a bow-and-arrow choke. The match lasted one minute and four seconds.

Dern is at a moment where her ambitions outweigh experience. Last month, UFC president Dana White told TMZ about his interest in Dern, and Dern previously said she has aims of coming to the UFC later this year. But she's developing a strange reputation: despite dominating similarly green opponents while showing flashes of brilliance—specifically, the wacky bit of body mechanics she used to choke out Montana Stewart in the first round last October—she's also a woman without a weight class, failing to reach the 115-pound limit twice in a row.

Maybe that's just the casualty when ambitions collide: Dern has continued to compete in grappling matches throughout her MMA career thus far. But the differences between MMA and IBJJF-style jiu jitsu go deeper than the uniforms, and the overlap between the two grows smaller and smaller, with each demanding ever more tailored skill sets. MMA simultaneously demands renaissance men and women in their accrual of abilities, but treats them harshly for straddling different worlds. There’s probably a reason why former Bellator champion Joe Warren trained simultaneously for the Olympic wrestling team tryouts and an MMA bout, then got badly knocked out by Pat Curran. Dern's stand-up looked better against Roy, but not improved enough that she can put it on the shelf and throw on a gi.

But Dern’s résumé consists of three pro fights, all of which were broadcast on TV. She had no chance to work out her awkwardness on the amateur circuit, fighting in bingo halls and Polynesian restaurants—even the son of Kimbo Slice, who was signed to Bellator before his pro debut, had that luxury on one occasion. Now is a time for us to be careful, to temper our expectations, to remember that there's not much carryover when a fighter loses by a submission that depends on grabbing an article of clothing barred under the Unified Rules of Mixed Martial Arts, and to accept some fumbling as Dern graduates from neophyte to prospect.

For Dern, there's that old, stupid, true cliché about losses as opportunities for learning. If spreading yourself thin and manipulating your frame to function in different sports with different weight classes bites you in the ass, you need to just pick a road and take it. Maybe after getting trounced by the heavier Mesquita she'll feel regret about missing weight. And maybe losing in a jiu jitsu tournament will lessen the weight of expectations for Dern at an opportune moment. It's better to lose somewhere you were going to leave anyway, then say goodbye with your limbs in a tangle to remind you that in the future there's no half-stepping.