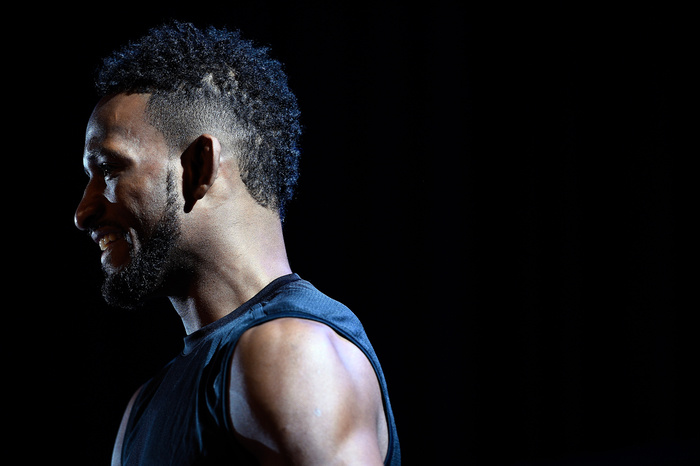 Neil Magny used to be something of a question mark for most pundits. He put together a rare seven fight winning streak inside the UFC between February of 2014 and May of 2015 and raised eyebrows with his activity and consistency but it seemed to be a long time before his level competition was stepped up. When he was finally thrown into the deep end with the shark that is Demian Maia, Magny was thoroughly outclassed by the jiu jitsu savant and it seemed like Neil Magny had been shown up as a middling welterweight who was making a fleeting visit to the top end of the division. However, Magny's three fights since then have been against the decent Erick Silva, the legitimate contender, Kelvin Gastelum, and the returning monster, Hector Lombard, and he has looked better and better in each.

Meanwhile Hector Lombard is the antithesis of Magny in terms of work rate within the UFC. Managing just two bouts in 2013, one in 2014, and one in January of 2015 before testing positive for Desoxymethyltestosterone, one of the so-called 'designer steroids', and being booted out of the sport for a year. A terrifically hard puncher and a top-notch judoka, the stocky Cuban has come down from middleweight to welterweight and is still giving up reach and height to most of his opponents.

As the fight opened, Lombard looked to cut the cage and Magny looked to circle out. As Magny circled a little close to the fence, Lombard charged in with the wide, wild hooks he is famous for. As Magny covered against the broad sides, Lombard shot a right uppercut up the middle and decked the taller man. Lombard followed Magny to the mat and began wailing away at Magny's turtle.

It was here that Steve Percival gave the first signs of what a terrible job he was going to be doing as a referee in this bout. Lombard dropped stiff forearms and hammerfists from both hands across the back of Neil Magny's head and neck and Percival did nothing but uselessly announce 'watch the back of the head' as Lombard continued to foul.

This is the problem with the back of the head rule in mixed martial arts, referees are so reluctant to do anything decisive about it that you if you have an opponent hurt you might as well just rabbit punch them on the mat. Vitor Belfort and Andrei Arlovski have a few examples of this on their records, but Caio Magalhaes is undeniably the worst offender, having won two fights in the UFC almost entirely due to striking the back of the head. If you weren't aware, shots to the back of the head and neck and kill or permanently blind a fighter quite easily, they have no place in any sort of sport.

Magny spent the next minute or so underneath an angry Hector Lombard with the smell of blood in his nostrils. There is an argument to be made that the fight could have been stopped while Magny was under fire, but to Magny's credit—and in contrast to what was to come—he was moving and forcing changes in position. From the turtle, to the feet, to the turtle, to half guard. Lombard easily smashed him back to a worse position each time, but the fact that Magny continued forcing movement and attempting to either regain his footing or gain some control over Lombard would do more to fulfil the idea of 'intelligent defence' than simply putting the arms up around the face while being flattened out. Few rules apply well to both fighting on the feet and on the ground, but generally movement does more to make misses of good swings than guessing where your guard needs to be.

Once the fight returned to the feet, Lombard had already slowed. It was at this point that Magny began showing up Lombard's defensive flaws by aid of a skipping stone jab. Using his lead left hand to pat down Lombard's lead right hand, and immediately following up by flicking out a jab into Lombard's right eye. It's not a tremendously damaging blow but it proved to be quite an annoyance. The value of this flickering blow is in its ability to make a perfectionist out of anyone. Fighters don't like letting blows through, even those of little consequence, and sooner or later they start to adjust. From the moment Magny first landed his skipping stone jab, Lombard started raising his lead arm and elbow wide to deal with it. Lombard doesn't like moving to evade blows and he covers up against them. Each time Magny flicked Lombard's lead hand down, he'd raise it up high in anticipation of the jab and a right straight would come down the centre. Almost every time.

In the second round Lombard lumbered after his man but Magny's measured boxing enabled him to touch the judoka up quite easily. When Lombard did charge in Magny did an excellent job of using the double collar tie to land knees to the midsection, further sapping Lombard's gas tank. As the two came off the fence midway through the round, Magny landed a good knee and as the clinch broke he decided to chase with another one-two. This time, however, he pushed his luck just a little far and a booming Lombard left swing crossed over his right hand to send him to the canvas.

Lombard followed into the guard and it was here that Magny showed his ability to be a nuisance to the top player. Constantly being aware of where the power puncher's hands were, Magny gave Lombard little chance to let loose with his blows. Furthermore, Magny used his gangly legs to apply grapevines on the forward leaning Lombard, alternately stretching his legs out to unbalance him and keep him from posturing up. Not exactly high level guard play from the sweep, stand up or submit point of view but it completely eliminated Lombard's ability to follow up on the brief shift of momentum and continued to tire him out.

It was then that Lombard made the old Ken Shamrock UFC 1 mistake, he jumped on an ill advised leg lock and sacrificed top position. Magny came up, fought off a roll for the kneebar, and smashed his way into side control. Magny mounted and began to ding up Lombard from the dominant position until Lombard gave his back. Magny stretched him out, belly down, trapping his arms to the mat and began to rain in more shots behind the ears. The favourite of Takanori Gomi, he landed about fifty of these on Hayato Sakurai and by the time Sakurai got free he could barely stand steady on his feet, a knockout quickly followed.

For the last minute of the round, Lombard ate punches from the mount and stretched out on his front, never effectively or intelligently defending himself, and failing to stop even one in three blows at most points. He gave the old Kimbo Slice thumbs up to referee Steve Percival, and Percival let the fight continue. If a fight is stopped too early that's a shame for the fans, but the job of the referee is to enforce the rules and protect the fighters. Percival failed in both regards in this bout as he let Magny land over a hundred strikes from top position before the round ended.

At the start of the third round, Percival said to Lombard that he wasn't going to let him take that kind of beating on the ground again. Magny quickly took Lombard down, secured a mounted triangle and started hitting him again, and Percival promptly waved it off.

The usual scary showing of power from Lombard despite his time off and increased testing, but an even worse showing of cardio than usual. Lombard has always been a top notch bully in the ring: he can dish it out like few others. But if fighters don't quickly lay down for him he can often get discouraged and in swarming over Magny early he spent himself up. When the shorter man cannot move fast enough to negate the opponent's reach advantage, he is just a heavy bag for jabs and straights. The biggest win of Magny's career to date and the biggest loss for Lombard who has never been finished before and took a fair old beating before the referee decided to stop it in this one.

Little else of note happened at UFC Fight Night: Hunt vs Mir. Mark Hunt picked up another knockout as Frank Mir did little but duck down for Hunt's hips every time he approached. Rather than timing this with the uppercut as we all expected, Hunt adjusted his right straight to cross his body and caught Mir leaning just as Nate Diaz did to Conor McGregor the other week.

It's difficult to look too much into the “what's next?” for each man because the heavyweight title picture is so volatile and at times downright nonsensical. What is for certain is that both men will continue headlining Fight Night cards for as long as they both want to.

A decent night of fights, though nothing to write home about. A couple of weeks until the next UFC card but then we've got three on the trot, culminating in Daniel Cormier versus Jon Jones II so there's plenty to look forward to.