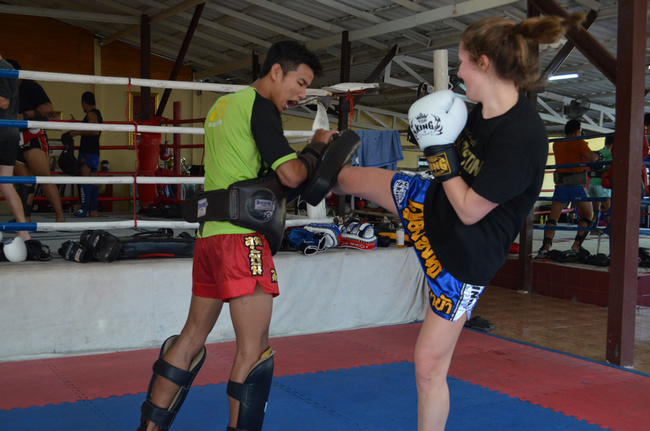 Ley was 16 when he first stepped onto foreign soil. The flight to Singapore had been short—he'd left his native Thailand only hours before. He wheeled his luggage through the terminal and surveyed the city outside. It was to be his home for the next six weeks. His gym in Thailand, Sitmonchai, had an exchange program with a gym in Singapore, and young Ley had been sent to work as a trainer.

The senior trainers at his new Singaporean gym showed Ley the ropes. "You'll have three training shifts per day," they told him. "Noon, afternoon, and night."

It was his first time working abroad and Ley didn't know what to expect. Most foreigners he'd met at home in Sitmonchai Gym had been nice enough, and he had learned some rudimentary English from them. Many of his new Singaporean customers were businesspeople and students, some much older than he. Despite the age difference, they treated Ley, still only a teenager, with the respect afforded to a teacher.

Ley loved working in Singapore. At night he'd chat with his twin brother Tia, still at home in Sitmonchai. He told his brother about life in Singapore, how the salary was good and the students were nice. Tia responded enthusiastically, said he wanted to work abroad too. 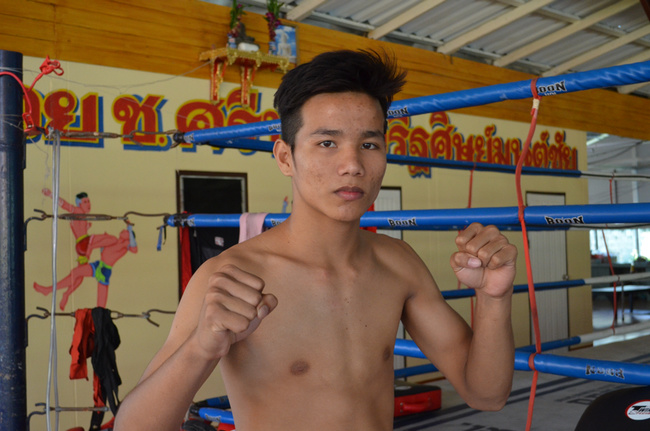 After his contract ended, Ley returned to his Sitmonchai family. His experience in Singapore had been positive, but not without its challenges. Communication had been difficult for Ley, still basically monolingual despite regularly hearing the foreign fighters speaking English around Sitmonchai. There was a learning curve as well—working as a Muay Thai trainer requires a completely different skill set than working as a Muay Thai fighter, as Ley had thus far been raised to be.

Ley had been strictly a fighter until the day he picked up a pair of pads for fun, just a few months before being sent abroad, and held for some of Sitmonchai's other Thai fighters. The older trainers watched him, said he was a natural trainer. After that, management let him hold more often, put him on pads with the foreigners. When a call from a gym in Singapore came in, gym owner P' Ae offered Ley the job.

Ley was only 16 at the time, on the younger side for someone to travel alone for work abroad, but P' Ae had few doubts about Ley's suitability as a trainer. The kid had always struck P' Ae as a fast learner. He was a teenager, but a hard worker and mature for his age.

Ley was enthusiastic about the work. "It feels good when I see people learning from me," he says. "Like I'm passing on knowledge to the next generation." 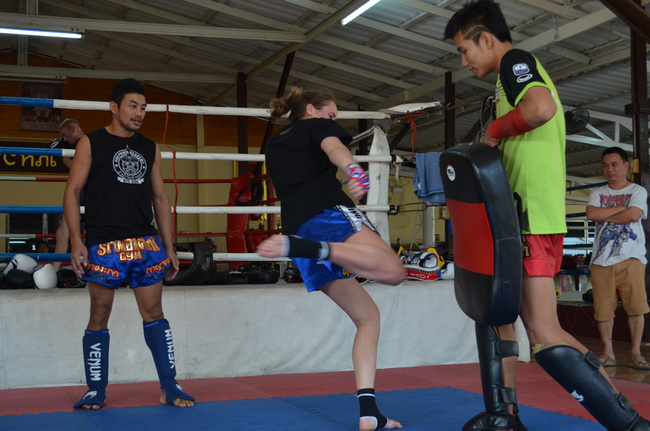 Working as a trainer in a foreign country is often far more lucrative than in Thailand, and going abroad is a lofty but achievable goal for many Thai trainers. Salary commanded depends on a trainer's experience, achievements in the ring, connections, and luck. Samsamut Kiatchongkao, a 27-year-old trainer and fighter with Rajadamnern Stadium and Thailand titles, reports earning 12,000 baht per month (about US $350) as a trainer in Bangkok. That salary might seem low, but when coupled with free room and board at the gym, it is a livable wage. He recently accepted a six-month job offer at his Bangkok gym's sister gym in England, where they assured him he'd make six to eight times as much, 80,000 to 100,000 baht a month (US $2,365 to $2,950), free room and board still included. His main goal while he's in England? "Save money," he says, adding that he's interested in longer contracts abroad, with the potential of opening his own gym in the future.

Samsamut may be an experienced trainer and a title-holder, but he's not particularly well-known internationally. Big-name fighters with globally famous names, such as the recently retired Pornsanae Sitmonchai, can often earn well over 100,000 baht a month working abroad when combining base salary plus fees from private lessons. The monthly wage for a young, new trainer like Ley, however, is considerably less, somewhere around 30,000 to 50,000 baht a month (US $885 to $1,480).

According to Abigail McCullough, foreign liaison of Sitmonchai Gym, the benefit of working abroad isn't just financial. For a young Thai man like Ley, working abroad is a gateway into the outside world. "I want [our trainers] to have an opportunity to travel and experience the big wide world beyond Thailand," she says.

It's also great career training. Abigail lists off benefits of working abroad: exposure to other cultures, learning foreign languages, adapting to new situations and customs, making connections around the world. "Allowing them to develop another skill set as trainers can only benefit them in the long run. Going abroad will also open up opportunities for them to fight internationally." 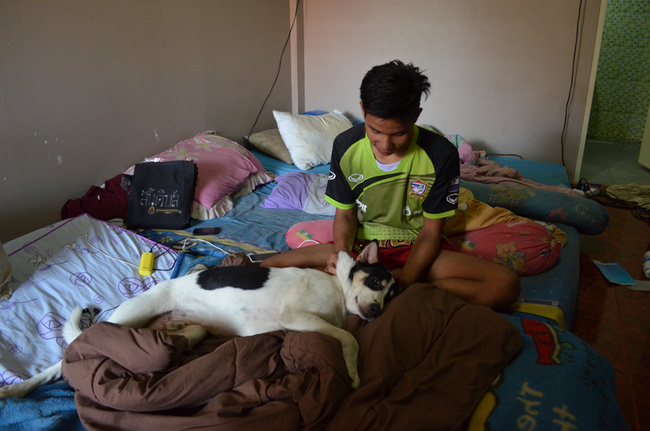 Fighting internationally is a financial bonus and career boost for many Thai fighters, but working as a trainer abroad at such a young age, as Ley does, potentially interferes with a career in fighting. With thousands of fighters raised in the sport all over Thailand, Muay Thai is fiercely competitive. When considering a future in Muay Thai, what's a more valuable use of one's teenage years? Training and competing as a fighter in hopes of winning titles and commanding high purses? Or working abroad as a trainer, learning foreign languages and cross-cultural business and communication skills?

Many fighters retire from Muay Thai at a young age and find careers completely unrelated to the sport—Bangkok is filled with cab drivers and fruit sellers who once were boxers. On the other hand, it's easy to imagine a young fighter like Ley, already experienced in working abroad, making the transition to career trainer seamlessly after retiring from fighting. It's as if he's being groomed for it.

Sitmonchai management struggles with this very question of whether to raise some of their young fighters on a trainer career path as opposed to high-level fighting. Abigail McCullough would prefer to see them fight in addition to training others. When the younger trainers get offers to work abroad, Abigail often makes it conditional on their agreement to step up their own training and fight regularly once they return to Thailand. "I want the kids to keep fighting but also to develop their training skills at the same time so that they have options," she said.

Sitmonchai Gym itself, tucked away in Kanchanaburi Province to the west of Bangkok, is an environment already conducive to learning how to train foreigners—with a globally recognized name in Muay Thai, half the population at any given time at Sitmonchai is international. It makes the transition to life abroad that much easier. "Working with foreigners here [in Thailand] definitely affects their abilities working abroad," Abigail said. "They're much more confident and comfortable working with foreigners now." Their cross-cultural skills will become only more valuable as Muay Thai continues to grow in popularity globally.

Abigail is currently navigating the world of Australian visas. A gym in Melbourne recently approached Sitmonchai, asking about their trainers. Ley is first in line to go, but he won't make the trip alone. His twin brother Tia is packing his bags too.

40 Years in Phuket: An Inside Look at Singpatong Gym