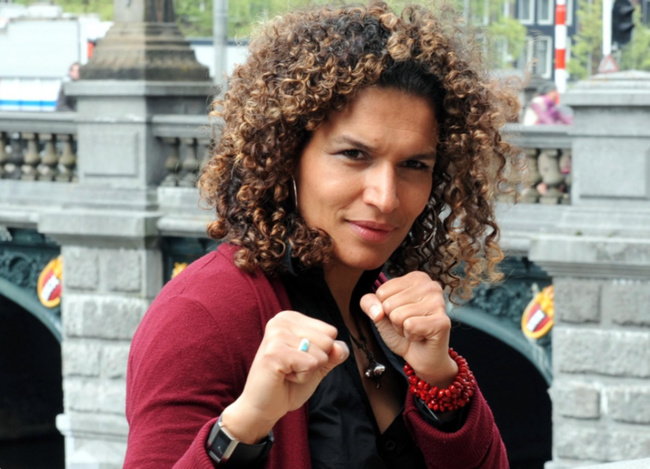 Americans are a people of paradox. We love the holy man who swears and the pacifist who reluctantly takes up the sword. We love the disturbed genius who can see further than the rest but not close enough to tie his own shoes. We’re fascinated by the Amish, who despite living in the most technologically innovative nation in world history choose to drive their horse drawn carriages. We love the Oklahoma billionaire who drives the old pickup truck and are fascinated by historically marginalized ethnic minorities decked out in gold and diamonds. We love reformed gangsters and stories of chemistry teachers turned gangster. Among these paradoxical tropes is the beautiful woman who can beat up a man. Right or wrong, we grow up believing in masculinity and femininity as polar opposites, with the feminine being soft and the masculine being hard. Men smash cockroaches and women scream as they jump on chairs to avoid them, or at least that’s the tradition. We grow up noticing the obvious physical differences between men and women and realize that men, on average, are bigger and stronger. This is why the knight saves the princess from the dragon and not the other way around. This is also why we love Game of Thrones’ Brienne of Tarth, Wonder Woman, Black Widow or Eowyn from The Lord of the Rings. The feminine is not supposed to be physically stronger than the masculine, so when it is in art, it jolts our senses and gives us a rush.

The natural question born of such fantasy is whether these things can happen in real life. The short answer is yes. A trained woman can beat up an untrained man. We’ve all seen those videos of girls, from the white belt to blue belt level, choking out men in house party living rooms. As far as combat sports go, there have been several attempts to answer this question, all of which were bad ideas. The following is not intended to be a comprehensive list of women fighting men but one sufficient to describe the fascination this idea has had and how it’s manifested itself in combat sports.

Andy Kaufman vs A Bunch of Different Women
Andy Kaufman is the famous avant garde comedian known for his roles in Taxi and Saturday Night Live. Kaufman was in many ways the first ever troll. Rather than tell jokes to laugh with the audience, his jokes were on the audience; he intentionally performed to get the audience against him. Part of this shtick involved professional wrestling. Though it’s impossible to read people’s minds, one gets the feeling that a lot of Memphis wrestling fans, in the early 80’s, thought pro-wrestling was a legitimate athletic contest, or at least, they were very good at suspending disbelief. Kaufman would berate the Memphis wrestling fans, bashing the culture of the South, claiming to be superior to them because he was from Hollywood. Kaufman crowned himself the inter-gender wrestling champion of the world and would “compete” in wrestling matches against women. The idea of women fighting men was a joke.

The matches would almost always feature Kaufman humiliating these women in one-sided, misogynistic affairs. Today, since Kaufman’s methods have been over-exposed in docudrama, we see that the joke is on us. These matches are intentionally disturbing so as to appeal to our sense of justice and chivalry. Kaufman’s act worked because it played on a sense that what he was doing to these women was unfair and cruel, because it reinforced what we already knew, that all things being equal, women cannot compete with men in combat sports. Kaufman was too scrawny and un-athletic to wrestle men so he had to pick on the weaker sex, like a coward, or so that was the act. 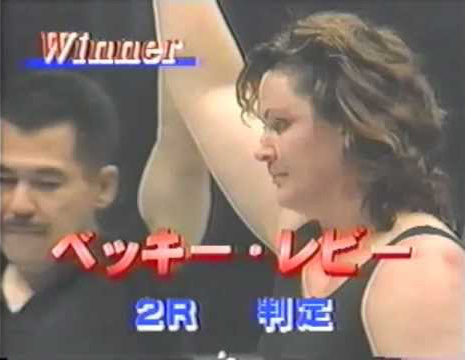 Becky Levi vs El Soberano
At the around the time Dan Severn ruled the UFC, as he introduced Don Frye into the game, both fighters shared a strength and conditioning coach, Becki Levi. If you watch old Don Frye fights, you can see her in his entourage, a tall strong woman. Becky Levi has an MMA record of 7 wins and 1 loss, the loss being to a flying armbar by Marloes Coenen. Levi could legitimately be described as a pioneer in women’s MMA and for that deserves respect. However even she couldn’t resist the urge to fight a man. Though standing 6’0”, Levi fought a 5’6’’, heavyweight luchador named “El Soberano”, Javio Flores. This was an unsanctioned fight, submitting him in less than four minutes. The match should rightly be put in the “freak show” category of pre-Zuffa MMA. What’s important is not that the fight happened but that it happened against a physically inferior male, with no professional combat experience.

Lucia Rijker vs Somchai Jaidee
From the proud tradition of Dutch kickboxing, Lucia Rijker has a kickboxing record of 37 wins, 0 losses and one draw, with 25 wins coming by KO. Rijker later made the transition to boxing and amassed a record of 17 wins, 0 losses, with 14 wins by way of KO. Despite her legendary status among hardcore fans, Rijker lived in the shadow of more famous female boxers, like Christy Martin and Mia St. John. The parallels between Lucia Rijker- Christy Martin and Cyborg Justino-Ronda Rousey are interesting. There is nothing new under the sun.

While still a kickboxer, Lucia Rijker fought a man, Somchai Jaidee. At the time of the fight, Somchai Jaidee had 13 wins, 1 loss with 9 wins coming by way of KO, or at least that’s how he was billed. When one watches this fight, one gets the feeling that Somchai is a legitimate fighter. Rijker isn’t looking for a “one and done” push over. She wants to fight a real male kickboxer. As amazing and dominant a striker as Lucia Rijker was, a true legend, she got knocked out in the second round by a male kickboxer, one who hasn’t left a mark on Google beyond this one fight. Rijker deserves credit for her courage and warrior spirit but even this unbeatable female fighter got knocked out, rather easily, by a nearly anonymous male.

I started this article discussing fake inter-gender combat, in Andy Kaufman. Then we went to real inter-gender combat, in Becky Levi, a spectacle too mismatched to be considered a legitimate contest. These were then followed by a cautionary tale, Lucia Rijker vs Somchai Jaidee. Honorable mention should also go to former Ronda Rousey opponent, Ediane Gomes vs some guy in Rio Heroes. Why? Because ever since Ronda Rousey ran over three women, in less than two minutes, two of which were previously unbeaten, talk erupted of her beating half, if not all, of the UFC’s bantamweight men.

It’s fun to talk about theoretical fights between super heroes we want to believe in, like Bruce lee vs Helio Gracie, but reality is more dangerous than fiction. Fighting a fellow female on steroids is problematic enough but fighting a man is like fighting a female uruk hai. Real fights between men and women almost never go the way we want them to but they almost always go in the depressing ways we should expect them to. Lucia Rijker taught us that.

A Case (As If It Was Necessary) For Ronda Rousey