Manny Pacquiao and the Bali Nine 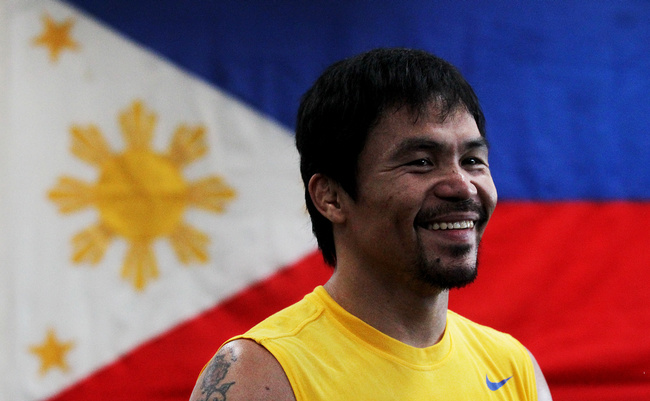 Go ahead and add human rights activist to Manny Pacquiao’s lengthy list of career achievements. Just days before Pacquiao’s May 2 fight of the century versus Floyd Mayweather, the Filipino superstar, professional boxing’s only eight-division champion, took to the international media to address Indonesian President Joko Widodo. Pacquiao pleaded for the Indonesian government to spare Veloso, who was set to face execution by firing squad as part of the Bali Nine heroin trafficking ring.

“I, Manny Pacquiao, on behalf of my countryman Mary Jane Veloso and the entire Filipino people, I am begging, knocking at your kind heart that Your Excellency will grant executive clemency to her by sparing her life,” stated Pac-Man in front of assorted international media.

And while Pacquiao was unable to effectively save all nine members, including Andrew Chan and Myuran Sukumaran, who were executed on April 29, his last-minute public appeal to President Widodo was enough to spare Veloso.

Yes, Manny Pacquiao saved this death-row inmate’s life just 96 hours before his historic bout against Mayweather at the MGM Grand in Las Vegas. And once again, a marquee fight has a political and cultural twist that pushes sport beyond the ropes of the ring and the walls of the arena. Again, human rights finds its place in the most important sporting event of its generation.

Like Jack Johnson, who became the world’s first black heavyweight champion, or Muhammad Ali, who conscientiously objected the Vietnam War, Pacquiao has turned boxing into a metaphor for diplomacy. Like Max Schmeling and Joe Louis, who fought just prior to the eve of World War II, Pacquiao has taken the purity of pugilism and found a way to spin sport into international politics.

And it was all for a women he’s never even met.

A mother of two, Veloso was arrested for smuggling 2.6 kilos of heroin into Indonesia in 2010. Claiming that she was the victim of human trafficking, Veloso pleaded not guilty, filing multiple appeals after she was sentenced to death.

Her claims and pleas would go unanswered by the Indonesian courts, and the death sentence was upheld. But where there’s a Pacquiao, there’s a way. And using his status as a legendary athlete, activist, and politician, Pacquiao offered one last-ditch effort to save his countryman.

“It will be a great morale booster if in my own little way I can save a life,” commented Pacquiao. “I am dedicating this fight to my country and the entire Asian people, to which the Philippines and Indonesia belong. Thank you Mr. President.”

Linking one of the world’s greatest boxers to an international heroin trafficking ring seems like one of the more bizarre associations in modern sports. But with Pacquiao, his recent experience with the Bali Nine just further proves his place as a transcendent athlete, who means just as much to the world outside of the ring as he does inside the ropes.