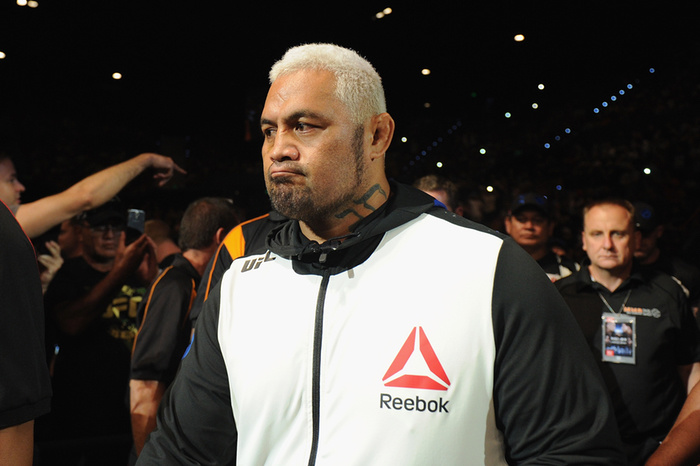 UFC heavyweight Mark Hunt is very quickly transcending his position as a mere fighter and transforming into something of an MMA folk legend: a modern-day Robin Hood, stealing from the cheaters and giving to the cheated. Finding himself mistreated one too many times by the duplicity of his opponents and the governing bodies that enable them, he is reimagining himself as a great righter of historical wrongs, both for his own sake and for the sake of the sport he loves.

Recently Hunt retained the services of attorney Christina Denning, a partner at the San-Diego law firm Higgs, Fletcher and Mack, in the hopes of forcing the UFC and MMA’s various regulatory bodies to change the way they punish doping-policy violations. At UFC 200 on July 9, 2015, Hunt lost by unanimous decision to Brock Lesnar, the longtime professional wrestler making his return to the UFC after a five-year absence. Leading up the fight Hunt expressed concerns that Lesnar was using performance-enhancing drugs, and sure enough after the fight news broke that the former UFC heavyweight champion had failed two drug tests, one administered before the fight and one after, testing positive for banned anti-estrogen agents, a near-sure sign of steroid use. Lesnar, a money-printing superstar who had been brought onto the anniversary card at the last minute to save what was shaping up to be promotional washout, was temporarily suspended by the Nevada Athletic Commission and given a hearing date for December of this year, but he kept his $2.5 million fee and whatever pay-per-view revenue he was owed and happily walked away.

Hunt was livid then and five months later he’s still livid. Not just that Lesnar walked away unscathed after cheating his way through a cage fight but that the whole system by which PED users are punished in MMA is better for the promotions and the regulatory bodies than it is for the fighters who put their bodies and lives on the line.

As such, Hunt wants a provision added to his contract (and, we assume, everyone else’s contract—Hunt being a pro-fighter’s union man, after all) stipulating that if a fighter is caught cheating, that fighter forfeits his entire purse to his opponent. Currently, any proceeds taken back from a fighter caught doping either go back to the UFC’s anti-doping program or to the state athletic commissions, which then put them into state funds. Meanwhile the fighter who fought the cheater, who risked his neck, gets nothing. Which doesn’t sit well with Hunt (who risked his again during a gorgeous but brutal five-round war with “Bigfoot” Silva in 2013 only to find out Silva got popped for PEDs afterwards) or his lawyer.

"A change in all future bout agreements,” Denning told Fox Sports, “such that if a competitor's caught doping then the proceeds from the fight, whether that's just the purse or if there's a win bonus or there's pay-per-view proceeds, whatever compensation the cheating fighter receives, he wants a provision in all future bout agreements for him and he'd like to see it across the board that the compensation be forfeited to the non-cheating party.”

"The guy who gets in the ring with the juicer is the one who should get the compensation and they really should get the win if it's found that their opponent was doping," Denning said. "It's doing nothing for my client's career if he keeps fighting opponents who are on steroids and then the results are just thrown out as a wash."

Hunt is also considering direct legal action against Lesnar and possibly the UFC for the way UFC 200 played out. As of yet, Dunning says, no lawsuit has been filed but she has met with the UFC’s legal counsel.

Hunt says he’s had to turn down two fights the UFC offered him—one against Josh Barnett in Melbourne next week, the other a rematch with Junior dos Santos in Toronto December 10—because the promotion wouldn’t agree to put his requested anti-doping provision in the contracts. Which is proof, the fighter says, that his concerns run deeper than money.

"You think this is about money? I've turned down two fights already. This is about what's right, “ Hunt said. “I'm not going to keep fighting dopers. Why should I? The contract doesn't say I should be fighting dopers. If it does we should call it the ultimate fighting fucking cheating competition.”

Mark Hunt Not Happy About Brock Lesnar's Anti-Doping Exemption, but Whatever…