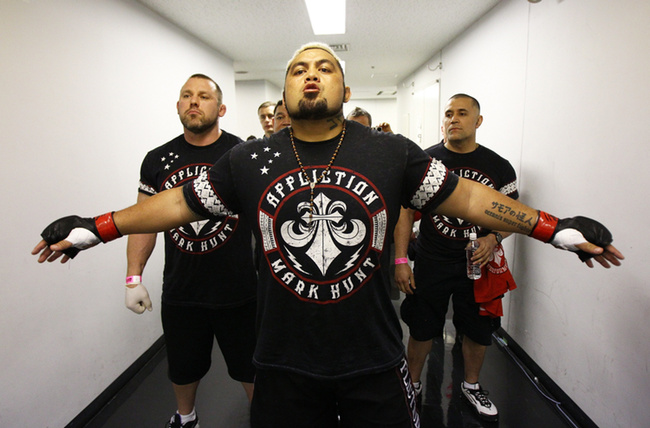 So all it took to put a dent in Roy Nelson's granite chin was a well set up collision with Mark Hunt's right hand. Who knew?

UFC Fight Night: Hunt versus Nelson certainly put on a show in the Saitama Super Arena, with excellent performances from Mark Hunt, Myles Jury, Yoshihiro Akiyama and Kyoji Horiguchi. Hell, even Katsunori Kikuno picked up a win... though he didn't look much different to the Kikuno who dropped his hands and got brutalized against Tony Ferguson.

As usual there were plenty of lesson to be learned or revisited on the card, and we'll run down some of the best ones here.

It's no secret that Takanori Gomi is past it—he was on a 2-2 slide when the UFC picked him up, seemingly as a preventative measure to DREAM or another Japanese promotion using him as a figurehead. But where we normally get to see Gomi eat some shots and say “well he's game, but he's just not all that anymore” the young Myles Jury didn't even give the Japanese legend a chance.

From the opening seconds, Gomi assumed his usual crouch—waiting to throw the big bombs—and Jury stood much taller. Jury immediately threw high kicks at Gomi—both roundhouse and front snap kicks—in order to stand him up. A great example of this being done in order to get in on a fighter's hips is Chris Weidman versus Mark Munoz. Weidman threw three high kicks at his heavily crouched opponent straight off the bat, then suddenly he was in on Munoz's hips.

By forcing Gomi to stand more upright, Jury could get his straight punches going and actually use his length advantage. The end came quickly as he used feints and volume to set up a beautiful right straight down the pipe which dropped The Fireball Kid. Gomi's chin is legendary, but the difference between a hard shot and a well hidden shot is remarkable.

The 1-3-2—or jab, lead hook, rear straight—is something we looked at in The Bible of Striking. Where the 1-2-3 narrows the guard with the aim of landing the hook around it, the 1-3-2 is intended to land the hook on the forearm and use it as a handle to land a straight down the middle.

In an Open Guard engagement (southpaw vs orthodox), the hook is more for the handfight than it is to force a block. Jury jabs, hooks to assume dominant hand position, and Gomi cannot follow him with the right hook (Gomi's money punch) as Jury steps offline to a dominant angle and lands his right straight.

Dominant hand position, Jury's hand is on the outside of Gomi's checking it across.

But the real spectacle of the event—and the reason you're reading this article—was the marvellous way that Mark Hunt handled and dismantled the ever-dangerous Roy Nelson. Nelson has taken the best shots from men like Junior dos Santos and Fabricio Werdum and just kept walking forward, even when exhausted. Hunt dropped him on his face and walked away.

Props to the referee for attempting to push Hunt over Nelson from behind. Exactly what you want to do to a 40 year old with pre-existing knee injuries.

Now the walkaway is actually part of the genius of Hunt's game. If he had dived on Nelson and tried to finish, Nelson probably could have woozily grabbed a hold of a leg while Hunt looked to awkwardly land hooks on a belly-down opponent (a reason that we need knees to the head of a downed opponent back). By doing his famous walk-away—Hunt avoids the problem that a striker would have to deal with by jumping on a floored grappler and failing to finish. It's clever, and it looks awesome too.

Now the final sequence was just another illustration of what we talked about regarding Hunto in the last article. Jabbing to the fence, getting the reaction, causing the collision. Against upright fighters Junior dos Santos and Stefan Struve, Hunt would push them to the fence and hit them with the left hook. Against Nelson, who was obviously looking for the takedown by round two, once he realized he couldn't get it done in one punch, Hunt knew that Nelson ducking in was the most likely reaction when he neared the fence. Exactly the same thing happened several times with Chris Tuchscherer.

But the uppercut was just Hunt putting away a tired and disheartened opponent. The surprise of the evening, and what fight fans should have picked up on, was how little Hunt got hit clean. Expected to be a battle of the two best chins in MMA, this fight turned out to be nothing of the sort.

Where Nelson has the power and the chin, Hunt also showed the defence and the ring craft. He got hit, that's unavoidable in a fight, but it was rare, and seldom flush. Through good movement, ringcraft, and the threat of the counterpunch—Hunt defused Nelson's dangerous first round, and suddenly Nelson was wheezing for air, with nowhere to go.

We'll look at the details, but first a little story.

Years ago, there was a man named Tony “Two Ton” Galento. In the colourful world of 1930s boxing, he was easily the most remarkable character. Galento owned a bar, and much of his training consisted of hauling casks around, then doing his roadwork in the early hours of the morning, after he had closed the bar. In between entering eating contests on the day of his fights, and boxing against bears and kangaroos for publicity, Galento actually knocked out enough opponents to merit a shot at the legendary heavyweight champion, Joe Louis—and even knocked Louis down in that fight.

What carried Galento was his incredible left hook. He not only had a powerful, fast left hook—but he knew how to land it. He would make occasion for it in every fight, and that would be good night, Irene. The problem was that outside of that left hook, Galento hadlittle. And though he moved fast for a 235lbs man, it didn't hold up through the rounds.

And it seems like Galento's death didn't finish him off, he keeps regenerating like Doctor Who and turning up all over the place. Big men with a money punch and not much else. David Tua is still a fan favorite—give Galento a little cardio and put him in a modern setting, and you've got Tua.

The exact same seems true of Roy Nelson—but instead of a tight, dangerous left hook, it's a wide, swinging overhand right. What an incredible right hand—but if you take it away from him he has very little. He has great jiu jitsu, but he will only attempt his takedowns once he is starting to get tired from swinging and missing. Mark Hunt's performance wasn't about landing first, it was about taking away Nelson's right hand, and this he did masterfully.

I don't believe that perfection is something that anyone can attain. I rate the two most perfect performances in mixed martial arts as Lyoto Machida's fights with Thiago Silva and Rashad Evans, where he took almost no blows. Mark Hunt's dismantling of Roy Nelson isn't quite on that level, but if I made some kind of leader board, it would be in the upper echelon for sure.

Throughout the bout, Hunt's corner yelled for “distance”. There were a few occasions where Nelson looked to land with his right hand, but because Hunt was right on the end of Nelson's reach as he dropped away, the punches were barely worth the effort of throwing.

Hunt was often in position to make Nelson fall just short. By the end of the fight, he had Nelson slowing down so much that Hunt could often sneak his own punch in, and pull back before Nelson had time to uncork his own right.

But performing only one type of evasion is just as bad as performing only one type of strike—you become very predictable. That is why it was so wonderful to see Hunt consciously stepping in and ducking under Nelson's swings. There is nothing more frustrating than being denied the proper range to punch. When it seemed like Hunt was running from Nelson's punches, Nelson would speed up to catch him, and Hunt would duck in—occasionally with a winding shoulder to the midsection—and Nelson would swing and miss over the top.

And, of course, staying off the fence is a priority against Nelson. This is what we saw Daniel Cormier do so masterfully in their bout. So many fighters, like Cheick Kongo and Antonio Rodrgio Nogueira, just circle along the fence. The key is to switch up directions—to draw the power hand and then make it impossible to land. Again it was Hunt's movement which frustrated Nelson.

Not quite as neat as Cormier's but he still got himself out of the hole.

The thing about long overhands is that the trajectory is very limiting. The longer an overhand gets, the more it starts to look like a straight, but with none of the benefits. If you pull away from a straight—there's often the risk of more coming. But to throw an overhand that far ahead of you, you throw yourself off balance and it's hard to follow up decently. Plus all the get outs of a hook remain—a fighter can still duck under it.

By the end of the first round, Nelson was already gassing. He moves quickly for a big man, but he can't keep it up. Hunt can sit back and counter into the third round of a contest. By round two, Nelson was shooting desperation takedowns and strolling along the fence with his mouth open. It was a complete reversal of positions. Hunt was no longer in danger, and all the pressure was on Nelson.

It was only a matter of time before Hunt caught him. Each time Hunt stepped in close enough to apply the pressure, Nelson would duck in and make an awful attempt at Hunt's leg—normally met with an uppercut.

I have long asserted that we are a million miles away from the Mark Hunt who dropped his hands against top level kickboxers simply to lure them into a brawl because he knew nothing else. What we saw from Hunt in Saitama was another step forward in the evolution of a man who—were he any normal combat sports athlete—should be out of the game by now.

Hunt still ate some brutal low kicks—which were the problem against Antonio 'Bigfoot' Silva, and which pinned Hunt in place for big punches—but overall it looked like a man who is bored of being hit for the sake of it and is starting to turn his work into his art.

What we saw from Nelson was another instance of someone defusing his right hand, and Nelson being left with no other options. Nelson clearly knows how to generate power, and knows the importance of his ring position. There is nothing stopping him from working at his left hook, becoming a two sided threat, and bringing so much more to the table.

The cardio has always been an issue, but even Hunt would have had trouble ducking and pulling away from a dangerous two handed hitter. Hell, his kicks clearly hurt Hunt, but he only threw two in the entire bout—against a guy he had no reasonable need to worry about being taken down by. Nelson is effectively tying one hand behind his back each time he steps into the octagon, and he's beaten some good guys doing it—but to beat the best, he's got to come up with something else.

Pick up Jack Slack's ebook, Fighting Karate at his blog Fights Gone By. Jack can also be found on Facebook and Twitter.