The world of martial arts-inspired fitness is kind of bizarre.

There really aren’t hockey, football or baseball-themed fitness classes for people who don’t want to actually play hockey, football or baseball, and yet there’s an entire industry dedicated to teaching fighting drills to people who would never, ever want to compete in a combat sport. Or touch another person. Or, in some cases, even watch another person compete in a combat sport.

As someone who worked in the fitness industry for a number of years as a Pilates/Kickboxing/Spinning instructor and personal trainer, and as someone who spent at least half of that time training in Brazilian jiu jitsu and Muay Thai, I’m fascinated, sometimes perversely, by the different ways that martial arts have influenced fitness programs, and by the ways in which the fitness industry has tried to capitalize on/exploit the growing popularity of MMA.

Some of these workouts are actually genuinely good, like Georges St. Pierre’s Rushfit DVDs, or even Piloxing’s new hardcore workout. Some might look silly to people who actually care about martial arts, but are generally OK alternatives for people who would otherwise take a Zumba class. And some are just plain stupid and dangerous for your body and your credibility.

Here’s a look at ten of the biggest MMA-related trends in fitness today:

Boxercise is actually a brand of boxing fitness training that comes with some pretty garish branded equipment, but the name is now used to describe any generic form of exercise class that involves an element of boxing training, sort of like how all cotton swabs are called Q-tips or all bandages are Bandaids. Boxercise started in England in the early nineties, just as enthusiasm for high impact Jane Fonda-style aerobics began to wane and the brand’s combat-free boxing exercise classes gained popularity among fitness enthusiasts looking for most of the toughness of boxing training with none of the getting punched in the head. Almost a quarter of a century later, Boxercise remains popular in both its branded and generic forms, and can often be found offered alongside traditional boxing training at old school gyms because it sometimes makes as much—if not more—money than actual boxing. (And, in my experience, it’s often taught by actual boxing coaches who need to pay their bills but really, really wish they were teaching proper boxing instead.)

When William Shakespeare pondered “What’s in a name?” in Romeo and Juliet, he had no way of predicting that a name like Tae Bo would come along hundreds of years later and that the answer to that question would be “a bit of everything, and it’s kind of batshit.” Tae Bo, you see, is at its most basic level, a combination of Taekwondo and boxing, two of the main influences on the exercise system’s blend of martial arts and aerobics. But it’s also an acronym for Total Awareness Excellence Body Obedience, which, like everything Tae Bo creator Billy Blanks says in Tae Bo exercise videos, sounds good but makes less than perfect sense.

Billy Blanks, a seven-time Karate world champion, started blending martial arts, dance and aerobics in the late seventies and early eighties with a class he originally branded “Karobics.” He spent the next fifteen years improving on both the class and the name. By the late nineties, Tae Bo was pretty much everywhere from bougie New York gyms to infomercials starring Carlos “King” Palamino, to the Wal-Mart in my crappy hometown. I actually bought a copy of a Tae Bo Crunch workout on VHS around that time, and did it semi-religiously for a while. The workout itself is a bit silly (and Billy Blanks does not know what the past tense of the verb “to sweat” is) and it’s at best a moderate challenge in terms of cardio and coordination, but I can’t hate on it. Tae Bo devotees aren’t going to hurt anyone with the delicate little roundhouse kicks they learned from Billy, but they’re not going to hurt themselves, either.

According to a friend of mine who’s a coach, it’s at least more practical than some questionable Muay Thai schools. 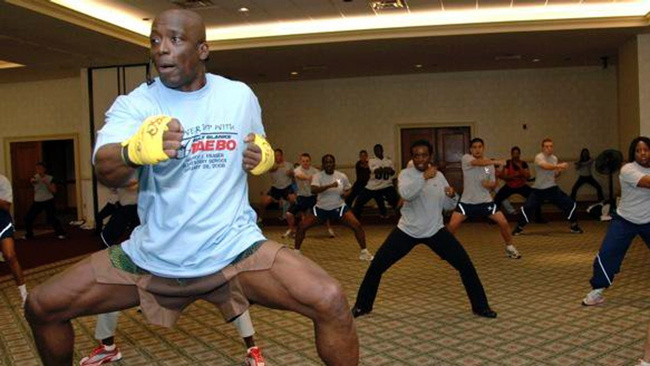 Why does CrossFit need its own self defense system, you might ask. I don’t know. Maybe it’s because the more cult-like segment of the fitness phenomenon’s population is so obliviously pro-CrossFit that they refuse to learn anything that isn’t somehow CrossFit approved or branded. Or something. Forget it, Jake. It’s CrossFit.

Now, I’ve never taken CrossFit Defense, so I can’t say for sure that it’s as ridiculous as it looks. But I’m going to go out on a limb and assume that the program teaches effective self-defense techniques about as well as most CrossFit boxes teach proper Olympic lifting form and responsible plyometric training.

I don’t even know what to say about this combination of Kangoo Jumps trampoline-style training and kickboxing. At best it’s stupid. At worst, it’s dangerous and fucking stupid.

This appears to be some sort of collective madness that has swept the fitness industry. People are mixing dance moves and punches to strike BOB dummies to the beat of the music.

They’re turning kickboxing moves into dance moves and making serious business routines out of them. To Macklemore.

They’re even mixing the dreaded Zumba with kickboxing.

This might seem ridiculous as shit to those of us who are more interested in the natural rhythms of actual fighting, but I can only moderately mock it. It’s getting people moving and I doubt any of them would genuinely believe that busting one of their moves would do much to help them in a physical altercation. I can’t really hate on anything that doesn’t actively harm people or give them a false sense of security in self-defense situations. This is more of an “as long as they’re having fun” kind of thing. Except that poor Zumba woman in the grey. She looks like she’s having, in the parlance of The Mighty Boosh, minus fun.

I used to make fun of Piloxing, a combination of dance, boxing and Pilates. A lot. It looked preposterous, and it had the only name in combat-inspired fitness dumber than Tae Bo. But I recently had the chance to participate in a preview of their new Piloxing Knockout program (which will be unleashed on the world next year) and it wasn’t stupid at all. The class, led by Piloxing founder Viveca Jensen (a dancer, Pilates instructor and trained boxer “from Scandinavia”), was a really well thought out mix of Pilates principles and boxing and cardio drills that seemed to appeal to people who wouldn’t otherwise consider any sort of martial arts-based training. It’s basically a slightly easier Rushfit for people who like Zumba and/or wear copious amounts of neon when they exercise. 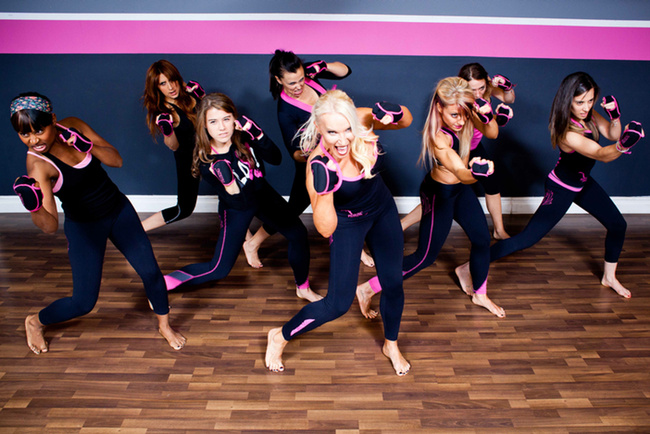 I love Brazilian jiu jitsu drills. I think they’re some of the most challenging and fun exercises out there. But they can be a hard sell in your average fitness class. Normal people, I’ve come to realize, just aren’t that interested in rolling around with other people and getting their sweat and stink all over them. Fitness Kickboxing Canada, which offers instructor training in Kickboxing and MMA-themed fitness classes, has come up with some really creative ways to get around that. Their specially designed bags and dummies allow normals to try out some groundwork in a way that’s fun, relatively easy to pick up, and neutral-smelling, and their partner belt training is the best use of BJJ-style belt drills I’ve seen outside of a proper dojo.

Former UFC Heavyweight Champion Bas Rutten’s Body Action System includes a stand with custom-designed head and torso pads (the Deluxe model also comes with two focus pads; the X2 model comes with four focus pads) and a series of DVD workouts that Randy Couture has endorsed as “a great set of workout tapes.” It’s a lot more serious than the class he teaches in Here Comes The Boom.

Cagefit is UFC legend Matt Hughes’s workout program. It promises all of the conditioning challenges of MMA training with no combat, no partners, and no martial arts. Using a sandbag that doubles as a heavy bag, Hughes and his crew take participants through five rounds of drills that will be familiar to anyone who’s dabbled in MMA training in five rounds of five minute drills. It’s probably the second best circuit training program partially designed by a UFC Welterweight Champ.

I’m a little bit obsessed with the Rushfit series of DVDs designed by Georges St. Pierre and his trainer, Erik Owings. The collection, which comes with seven workouts that tackle the major components of fitness (strength, power, endurance, core, flexibility, agility, an balance) in some incredibly smart, scientific, and challenging circuits (five five minute rounds plus a brilliant warm-up and fascial-focused cool down). In a world filled with Insanity-style bullshit that can seriously hurt people with half-assed and poorly educated approaches to high impact and high intensity training, it’s so refreshing to see a series of DVDs that tackle plyometrics and HIITs in a way that’s safe and effective. And, in a world filled with perky, cheerleader-type fitness instructors and presenters, GSP’s amiable misery as he helps Owings coach you through the workouts is also pretty damned refreshing. It’s nice to know that a machine like GSP hates those fucking rotational planks as much as you do. 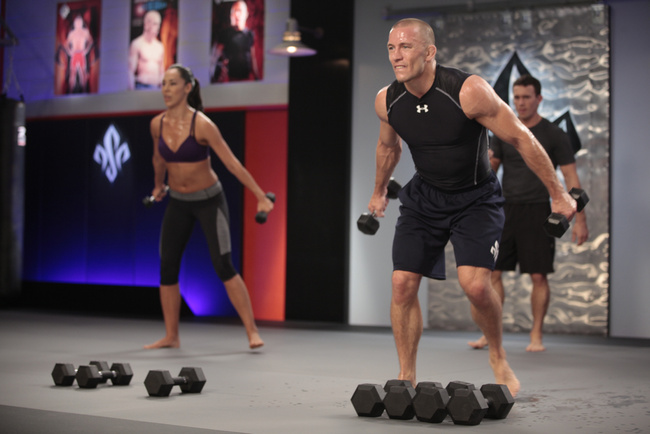