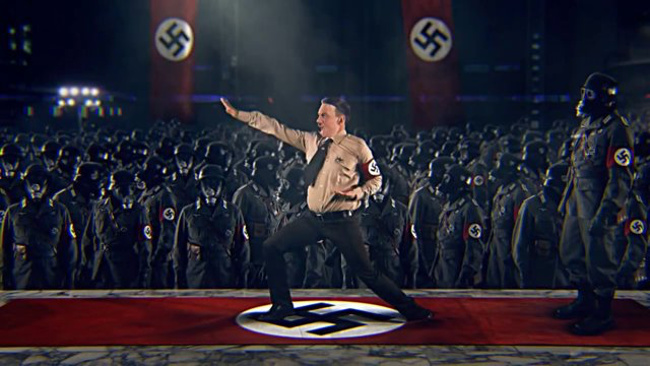 It’s arguably the internet’s most anticipated absurdist action film since Snakes on a Plane. The Hollywood Reporter semi-seriously called it one of the most eagerly awaited films at this year’s Cannes Film Festival. And now Kung Fury is coming to to a TV or internet-enabled device near you. The 30-minute short in which a Jean-Claude Van Damme-esque cop named Kung Fury (played by the film’s writer and director, David Sandberg) travels back in time to square off against a Kung Fu-practicing villain named Adolf Hitler (aka “The Kung Fuhrer”) makes its television debut on May 28 at 6:30pm ET on the El Ray network. It will also premiere on platforms like YouTube and Reddit that same day.

Kung Fury first captured the internet’s imagination when it launched its Kickstarter campaign in December 2013. Sandberg, a commercial and music video director who quit his somewhat lucrative day job to pursue his dream of making 80s-influenced martial arts films, had been working on the project by himself for a couple of years by that point, but he was running dangerously low on cash and turned to crowdfunding to help him finish the project.

“My plan was to shoot the entire thing and then do all the visual effects myself. I have a background in visual effects” the Swedish filmmaker told Fast Company in a recent interview about the making of Kung Fury that really should be read in its entirety. The film’s origin story is almost as amusingly odd as its plot. “But it turned out that it was way too much work and took too long and I was completely broke. I had to sell my couch and my TV to be able to afford rent and food. I was, like, at the tipping point. I told myself I needed to do something about this.”

Sandberg put together a trailer with the weird and magical footage he already had and set up a Kickstarter campaign with a goal to raise $200 000. Then he waited.

“Nothing happened for the first five hours and I was really bummed,” he admitted to Fast Company.

But then a fan of bodybuilder Andreas Cahling, who plays Thor in Kung Fury (because obviously the Norse god would play a part in such a film), posted the trailer to Reddit. In a turn of events that should surprise no one, the site’s users immediately fell in love with the trailer’s mix of unapologetically cheesy effects, basic kung fu moves, Nintendo Power Gloves, uzi-sporting Viking women, Nazi villains, and dinosaurs, and Kung Fury achieved the virality it so clearly deserved. It currently boasts over 10 million views on YouTube.

“Within 24 hours of launching, we reached our goal. People started calling. I freaked out. Hollywood was calling. Agents. Managers. It was cray. I basically didn’t sleep for a week because of the adrenaline rush. The campaign was for 30 days. By the end, we raised $630,000,” Sandberg said.

Kung Fury has been on one hell of a winning streak ever since. Sandberg landed a Hollywood agent on the strength of his trailer and finished the short film with the aid of a special effects studio. Then he recruited David Hasselhoff for the film’s theme song. The Hoff flew to Sweden to shoot the video for “True Survivor,” a vaguely Knight Rider-themed spectacle that includes footage from the film. The video for “True Survivor,” released last month, also went viral. To top it all off, Kung Fury was accepted into the illustrious Cannes Film Festival. It enjoyed its world premiere as part of the Directors’ Fortnight program last week.

But this is just the beginning for the Kung Fury. Sandberg is already pitching a feature-length version with up-and-coming producers David Katzenberg and Seth Grahame-Smith. He’s also planning a soundtrack (released on vinyl and cassette tape), a line of merch, and a video game. He (jokingly?) told The Hollywood Reporter that the game would be for the Commodore 64.