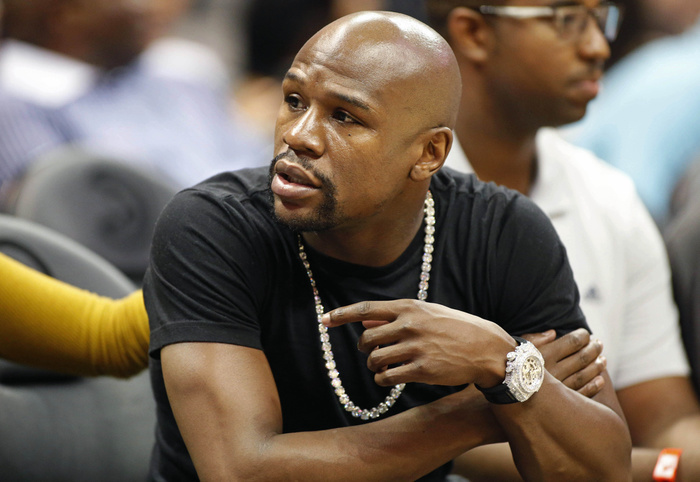 Well, I guess a UFC champion fighting one of the best boxers of all time between ropes instead of chain links might not be the never-going-to-happen hoax I thought it was. On Saturday, during a publicity tour stop in England, Floyd Mayweather, Jr. commanded his audience to take out their phones for what he was about to say. The subject of his monologue was UFC lightweight champion Conor McGregor.

"When I faced Arturo Gatti, I went to his turf: he was the A-side, I was the B-side. I beat him, I didn't cry, I didn't complain," Mayweather said, as captured by Fight Hype. "When I faced Oscar de la Hoya, he was the A-side, I was the B-side. I didn't cry, I didn’t complain, I beat him, and I became the A-side. For Conor McGregor, I'm coming out of retirement just to fight Conor McGregor. I don’t wanna hear no more excuses about the money, about the UFC. Sign the paper with the UFC so you can fight me in June. Simple and plain: let's fight in June. You're the B-side, I'm the A-side."

As a practical matter, Mayweather's words mean little: questions of purse size, competition weight, and whether the UFC will offer its consent for McGregor's participation remain. Meanwhile, McGregor's only recent comment on the fight was retweeting a story about Mayweather's publicity tour van getting set on fire.

But with Mayweather's self-proclaimed exit from retirement, what seemed last year like a sideshow of shit talk to keep Mayweather and McGregor publicly relevant has moved into the realm of reality. Each has shown a sustained, specific interest in boxing the other. McGregor now has a boxing license in California. UFC President Dana White made a (rejected) $25 million opening offer for Mayweather's purse. Ten years ago, Mayweather would have never followed beating Oscar de la Hoya by letting Sean Sherk cram his face against a cage and elbow it into tenderloin. But now, if the UFC sees enough financial upside while they knock down walls in the scramble for cash elsewhere, they just might put a different and more vertically inclined lightweight champion to meet Mayweather into hiked-up shorts and great big gloves. 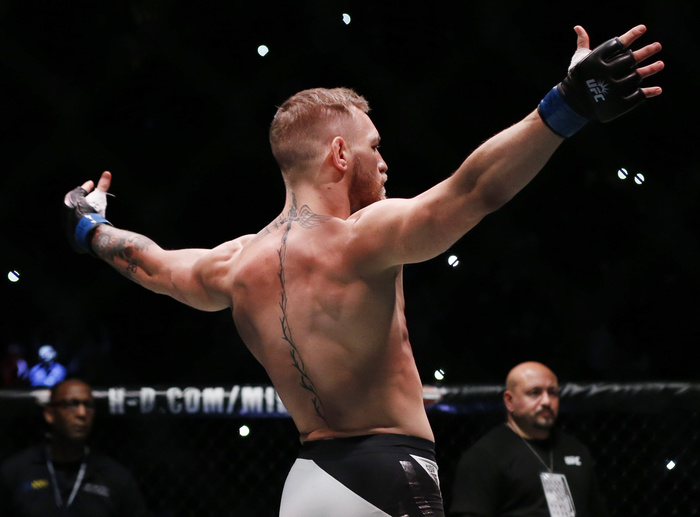 Going into what would be his 50th professional fight, Mayweather beat the promotional drums to foster doubt about his own abilities and, more importantly, about whether this will be like every other time he spent 12 rounds winning with defense. "[McGregor] is in his 20s, I'm in my 40s," Mayweather said. "Anything can happen." In recent weeks, Nate Diaz—McGregor’s nemesis and a sometime training partner for world champion Andre Ward—and Freddie Roach, who’s coached several of Mayweather’s challengers, have both given McGregor something resembling a chance in the bout. "I think it's a big publicity stunt, but my take on a boxing match between the two [is] I think McGregor’s got a good chance to make something happen in two or three rounds," Diaz told CSN Fights. "But I think he's got an amateur style where's only got good movement for six, eight minutes, and I think that's too amateur for Mayweather."

If you want more reasons why McGregor could pull of an upset, they're there: his greater size, his two-inch reach advantage, his knockout power, his comfort with the pomp and circumstance of a big show. When you want spectacle to be sport, you can latch on to anything to convince yourself that a 36-minute, one-sided, boring point fight isn't inevitable.

The defeatists say the same thing about criticism of Mayweather-McGregor that they say about every nonsensical money fight the UFC sets up: "Shut up, you'll still watch it." Maybe, but the more relevant question is whether we in the audience will play our part in this pugilistic transaction and actually buy the pay-per-view. Speaking for myself: no, I won't. A UFC champion playing tourist against an immoral boxing champion in a fight whose sole purpose seems to be a big payday for the principals and a lot of disappointment for everyone else…I'd rather cop a pair of Air Force Ones. I will pay to watch the best to fight the best. I won't pay for an event held for the sake of being an event.

Of course, at least a million people would do the opposite, which is fine. Honestly, this fight should happen and, if not in June, then soon. Mayweather-McGregor has hijacked combative sports dialogue through its sheer craziness, and it's getting tiresome. I just wrote about it for at least the third time in 10 months. And you, dear reader, clicked on the link. It's a festering pimple on our conversations, growing bigger and more enflamed. It needs to pop so everyone can move on.

Trump, Tyson, and Don King Ringside at Mayweather-McGregor Is a Fever Dream Fit For 2017