Mayweather Says Boxing Is in Search of a White Superstar 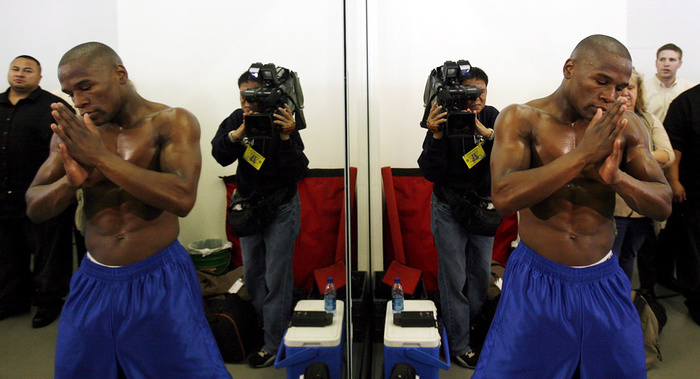 As boxing searches for a new face to represent itself, the last major icon of the sport is continuing to chime in from the retirement sidelines, saying the matter is a racial one. In an interview with Fighthype, former pound-for-pound champ Floyd Mayweather Jr. commented on the main contenders for the top spot he’s left behind. Two names came up in the discussion: Oakland’s Andre Ward and boxing’s “most feared fighter” Gennedy Golovkin.

“Whoever is forcing Andre Ward to go up to [light] heavyweight, that's not cool at all. They're trying to get him beat. From the looks of things, what's going on in the sport of boxing, they want their superstar to be Caucasian. It's obvious. And this has been going on for a very long time,” said Mayweather.

Part of that statement is true. There was indeed once a pervading sense of racism in the Sweet Science, most notably seen in the “Great White Hope” campaigns that appeared a couple of times in the last two centuries of the sport. The first instance was when the white public called James J Jefferies out of retirement to dethrone the first black heavyweight Jack Johnson and bring the title back to the white race. Capturing the sentiment was a quote from American author Jack London. It read:

"Jim Jeffries must now emerge from his Alfalfa farm and remove that golden smile from Jack Johnson's face. Jeff, it's up to you. The White Man must be rescued."

Jefferies lost in a one-sided bout, but the public disdain towards Johnson’s race largely remained. Boxing would not crown another black heavyweight champion until 29 years later when Joe Louis beat James Braddock for the title.

The second instance took place when the overmatched and under-skilled Gerry Cooney faced off against Larry Holmes in a championship match that was largely earned due to the color of Cooney’s skin. While no bad blood ever really existed between Cooney and Holmes before or after the bout, there was plenty of racial tension surrounding the fight, drummed up by promoters from corners of the ring. It was one of the most highly anticipated mismatches in boxing history, proving that racial controversies sell in American sports media.

But when it comes to Andre Ward, the arguments about his future are unlikely racial. Not many exciting matches are left to be made in the super middleweight division, and the public demand for a move-up in weight is likely for a potential matchup against the skilled and undefeated Sergey Kovalev, who himself has run out of worthy opponents in the light heavyweight division. Kovalev holds the advantage in power, but Ward has the better overall skill. It’s a fight that either guy could win. Perhaps it would be fairer to propose the bout at a catch-weight, but to say the proposed matchup is a racially motivated ploy to remove Ward from the spotlight is a bit of a stretch.

Furthermore, Mayweather’s logic gets a bit tangled when asked later in the interview about another huge star of the sport, Gennady Golovkin.

“The thing is, as far as boxing, it's all about taking risks and taking chances. I did it. I took risks. I took chances. I'm just waiting to see if Triple G is going to go up and fight Andre Ward. I'm going to be convinced when he can go up and beat Andre Ward. Until then, I'm not convinced.”

In other words, at least according to Mayweather, Golovkin has to do the exact same thing that Ward has been been allegedly “forced” to do. Another factor to consider is that both Golovkin and Kovalev, while outwardly Caucasian, are both foreigners, and neither fighter has exactly mastered the English language. Without the right nationality or the right language, it’s unlikely either of them would successfully crossover to the American mainstream, just ask how many people can name the current heavyweight champion of the world (and he actually speaks fluent English). And as a clean-cut Olympic Gold medalist who goes by the moniker “Son of God”, there probably isn’t a boxer out there that’s more American than Ward.

Boxing is certainly in search for the next great fighter to represent the sport, and it’s undeniable that wider societal beliefs inevitably bleed into that decision. But with the top contenders ranging anywhere from a hard-hitting Golovkin to the redheaded Canelo Álavarez, hopefully we can say the sport has made some progress from its more primitive days.