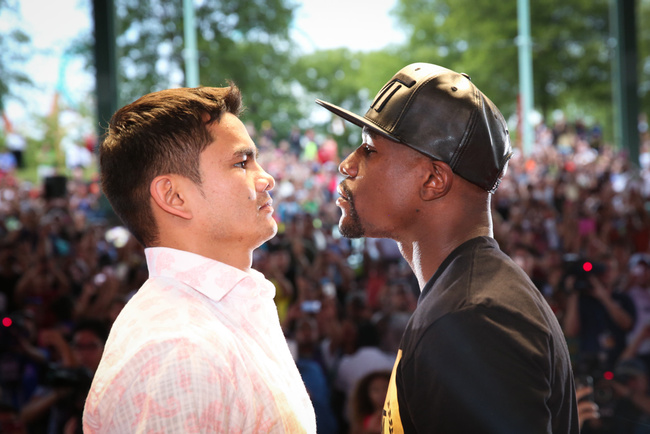 What do Floyd Mayweather Jr. and his ex-fiance have in common? You're unlikely to get either to part with their gigantic ring.

Joking aside, Mayweather's most recent performance raises some important questions for boxing fans and officials. Chief among those are:

⁃    Do welterweights and middleweights really need more than a 20ft ring?

Though Mayweather convincingly beat Marcos Maidana in a rematch, it certainly wasn't the best Mayweather we've seen. Where Mayweather has always chosen to fight in an enormous ring—it's hard to nail down numbers but the ring versus Hatton is said to have been 23 feet, rumours have the ring versus Maidana as big as 26 feet.

Now the advantages of a 23+ foot ring should be obvious against a man who wants to swarm you—there is a great deal of space to run into, and each time he wants to push you to the ropes, he has to embark on quite a trek. Mayweather's vintage strategy against men who want to swarm on him has been to get them chasing him across this enormous ring, then hit them with a right hand or left hook and immediately tie up. It's an old strategy, even recommended by Edwin Haislet in the 1940s, but Mayweather does it brilliantly.

Ricky 'The Hitman' Hatton had no answers for Mayweather—every time he got in close enough to do his best work, Mayweather was clutched against him and the referee was breaking them up.

Often this right handed, power punching punishment for walking in face first causes many of Mayweather's more aggressive opponents to start pawing with jabs. Now that—of course—is where he does his best counter work. If you throw reaching punches against Mayweather, he's going to pull back, let you fall short, and then fire over the top as you recover—the old Muhammad Ali favorite.

Juan Manuel Marquez is far from a brawler. Even the great technician was drawn into throwing one punch at a time and eating big counters.

Of course, aside from the ringcraft, the counters and the tie ups—the most important Mayweather offensive staple is the jab to the solar plexus. Using this technique allows Mayweather to draw defensive fighters' guards down and start following up. Against Diego Corrales—in probably my favorite Mayweather performance—it was these low jabs which set the way for faked level changes and left hooks, or looking low and bringing the right hand over the top.Corrales couldn't keep up and Mayweather wiped him out.

Unfortunately, Mayweather's performance against Maidana made the great American boxer look like a parody of himself. There was running around the oversized ring, there were occasional counter right hands, there were body jabs... but something was missing.

The body jab was there, but it was a point scorer. Nothing heavier ever came off it except the occasional slapping left hook which Mayweather seemed resigned to throwing against Maidana's right glove.

He even seemed to step away from that pull counter after he landed a cracking one in the first, then overplayed his hand and got tagged with a right hand when he thought Maidana was just going to probe at him with jabs.

There was enough of vintage Mayweather to win the fight easily, but at the end of the fight one didn't feel so much like Maidana had been schooled,  as much as he had been denied a boxing match.

I'm sure you know that the job of the bigger puncher or the infighter is to cut off the ring. To do this, you must force an opponent towards the ropes, then into a corner, then you must step across his path and trap him there before he can exit.  This is where the size of the ring becomes important.

George Foreman getting ahead of Kenny Norton.

Julio Cesar Chavez refusing to follow, but instead cutting across the middle of the ring.

Cutting off the ring is not a fool proof science. Even the best ring cutters, like Julio Cesar Chavez, would have to attempt to cut off the ring dozens of times a fight. It just gets easier when the opponent starts to tire from running and struggles to get out of the corners. The problem is that the larger the ring is, the further there is between the corners, and the more space a fighter has to be able to circle in.

Now since the earliest days of professional boxing, folks have bickered over ring size. Champions typically choose, but as everyone is a champion now, Mayweather chooses his ring size and his opponents decide whether they want to get paid or not. Smaller rings favor ring cutters and infighters, larger rings favor movement based boxers. So far, so simple.

The traditional ring size has been anywhere from sixteen feet, which Jack Dempsey opted to fight in, to twenty feet, which used to be considered the upper limit. Now, when Gene Tunney out-boxed Jack Dempsey to take his title, he did it in a sixteen foot ring. Tunney was considered cheeky when in the rematch, he decided they would meet in a twenty foot ring. Now remember that both of those men were heavyweights.

Mayweather is fighting welterweights in such an enormous ring, and a lot of the time it looks more like a track meet. Now that doesn't mean he isn't showing legitimately brilliant ring craft—this direction change is sublime...

The changing of directions along the ropes is to draw commitment of a punch—which can then be ducked under or run from in the opposite direction.

...but it does take some of the shine off of it that the deck is so heavily stacked in Mayweather's favor before he enters the ring.

Aside from the questions Mayweather raises about ring sizes, he raises a load more questions about clinching. Clinching too, is an art form, and Mayweather is a master of it.

Each time Maidana opened up to swing, Mayweather ducked inside and grabbed a hold of the underhook.

Overhooking one glove and carrying the other elbow high while remaining off to the side of the opponent's centre-line. James Toney used this to effectively neautralize Iran Barkley, Joe Calzaghe used it to slow down Jeff Lacy.

So was Muhammad Ali. That doesn't mean that Ali versus Frazier II wasn't a boring fight because Ali was allowed to hold for almost the entire match. Famously, there was tremendous conflict before their third meeting over choosing a referee. Because if Ali was allowed to, he would dance beautifully for one round, then hold for two.

The problem is that Mayweather used to use the clinch to get out of trouble or break his opponent's momentum. It seemed like the majority of this fight was ducking in and grabbing hold, with a little action in between. The focus has moved from boxing with clinches in between to clinches with boxing in between, and it's just hard to watch.

It used to be “punch and clutch” as he showed against Hatton. A power punch and a tie up to avoid a return. Saturday night's fight seem to be all clutch and no punch.

And this is what is so difficult about the entire Mayweather situation. So much of what he does isn't  what is taught as “boxing”. The tie ups, the cross faces, the leaving the lead elbow out and allowing the opponent to run into it. This is all stuff which I describe as “the grey areas”.

These are the main difference between someone like Adrien Broner and Floyd Mayweather. Broner has all the counters and the looks on the outside, but as soon as Maidana was hurting him or in close, Broner couldn't tie up or make Maidana stop throwing.

There is an undeniable art form in getting into the clinch—one must time a punch and slip to underhook the arm or block and overhook the arm—but if all a fighter is going to do is clinch... why not just watch mixed martial arts or Muay Thai where clinching is active rather than passive?

It's a touchy subject for some, I'm sure, but frankly, there is little entertainment to be had in watching a boxer deny his opponent the opportunity to box, and then do very little in the way of combination or counter punching himself. Even when he turned Maidana into the corner, Mayweather would throw a jab, then back off to the middle of the ring again.

To hit and not get hit is the art form... to not get hit and not throw much back is just tedious to watch.  Oliver McCall managed that in the middle of a mental breakdown.

The fight between Maidana and Mayweather had some good moments, but if you haven't watched it yet, I wouldn't bother catching up.

Mayweather-Maidana: Does the “10-Point Must” Work?

Mayweather to the Rescue