Mayweather versus Pacquiao: Beyond the Hype 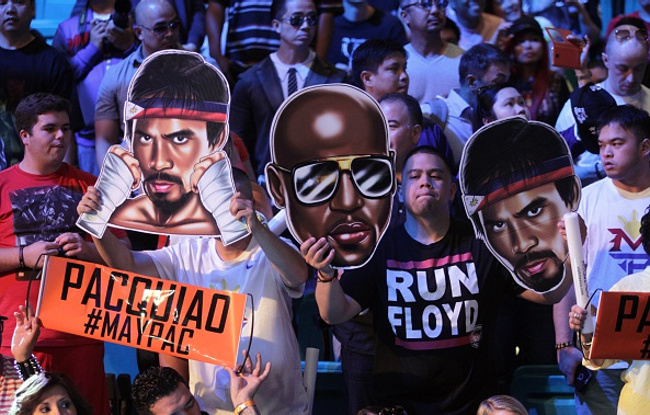 As a long-time boxing enthusiast, I’m as excited as the next person for the mega-fight between Floyd Mayweather Jr. and Manny Pacquiao tonight at the MGM Grand in Las Vegas. Just the mere occurrence of the fight is an impressive feat of overcoming a number of obstacles. From drug tests to purse splits to peace treaties between rival promoters and rival networks, this fight has mended the many broken bridges that were previously thought to be unmendable in the sport of boxing. But on the eve on what’s being touted as one of the best fights in boxing history, it is important to remember one thing: it’s not.

On a recent HBO segment called “The Legends Speak” George Foreman lists the fight as the third greatest fight in boxing history, ranking only the first meeting of Ali and Frazier, and Joe Louis vs. Max Schmeling II ahead of it. Maybe Foreman was being modest about his own accomplishments, but at least for me, the “Rumble in the Jungle” held much more social and athletic significance than a matchup between Mayweather and Pacquiao could ever hold. Even the mere mention of this fight amongst the aforementioned bouts of legend is a bit of a stretch. Ali’s bout against Frazier held both significant political and racial implications at the height of the Vietnam War, as did the rematch between Joe Louis and Max Schmeling for World War II (though much, if not all, of Schmeling’s association with the Nazi party was later found to be media propaganda). This fight, on the other hand, is more of a matchup between two fighters who have had great media machines behind them.

I’m not really a fan of either fighter entering the ring on Saturday night. In terms of their respective personalities (at least as much as one can tell from published media), I think they’re more similar to each other than what’s been presented.

Looking at Mayweather’s affect on the life of teammate Nate Jones, and other charitable acts of the past, such as footing the funeral bill of Genaro Hernández or financially sponsoring the Michigan Golden Gloves one year, he’s probably not as horrible as we’re led to believe. And there are principles that I agree with when it comes to Floyd Mayweather. Hard work. Dedication. Loyalty. Those are ideals that I can stand behind. Some of his actions outside of boxing, however, are ones that I can’t. His multiple convictions for domestic violence against women and the obsessive worship of material wealth run contrast to anything previously thought of as noble. 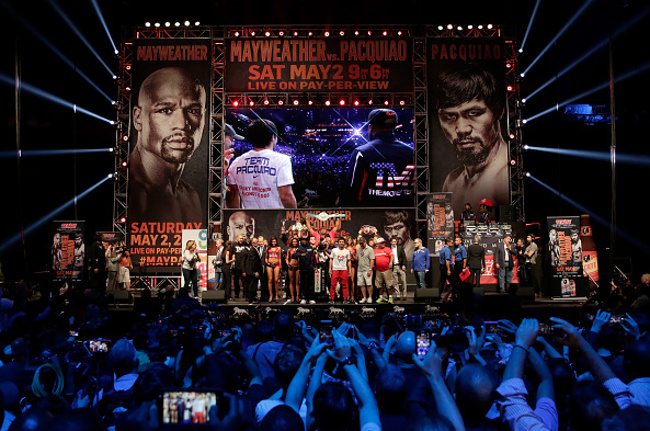 Across the ring is Manny Pacquiao, the multi-tasking philanthropic boxing congressman who is a reborn-believer in God. But while his recent actions involving the Bali Nine is admirable, not much is brought up regarding his questionable history with the IRS, or his documented past with compulsive gambling and marital infidelity. I’ve also wondered how much of his perceived humility was for the camera and how much transferred over in real life. I mean if Mayweather turned out to be an arrogant asshole in person, at least I’d have a heads up about it beforehand.

This is not to say the past defines a man, or an attempt to pass moral judgment on two fighters I’ve never met, rather it is to argue that the fight is between two people, not cartoon depictions of good and evil. And after all, this is a sporting event, so it is the matchup of talent and greatness inside of the ring that matters.

Yet even on that standard, I’d say the fight falls short.

One of the first things to be mentioned in attributing Pacquiao’s greatness is his supposed championship reign through 8 different weight divisions—a factoid that is only true if you consider “The Ring” title (a belt sanctioned by a magazine) or the disregarded IBO belt as legitimate claims to championships. It is also worth considering that his championship reign at lightweight consisted of a one-fight pit-stop against the B-rated David Diaz, and the fact that Antonio Margarito had hardly entered into the super welterweight division when him and Pacquiao faced off for the vacant 154lb version of the WBC stake. And without turning this into too much of a forum debate, when analyzing the time and pre-fight stipulations at which Pacquiao faced off against his most notable opponents, it is not too far-fetched to suggest that they took place at a time and under a particular circumstance for certain reasons.

This is not to say that Mayweather isn’t guilty of the same. In recent years, he’s fought his own fair share of catch-weight bouts and while I can empathize with the catalogue of matchups up until the Ricky Hatton fight, his two-year retirement after is where he subsequently allowed the talent in the welterweight herd to thin itself out. The choice of opposition since his return has been nothing short of strategically crafting the perfect meeting point between the most publically acceptable matchup with the least amount of risk and the most amount of revenue. If ring greatness is assessed by same standards of running a business, then Mayweather is the greatest fighter to have ever lived, but it’s not, so it’s difficult to give him that claim. Don’t get me wrong, I too would favor Mayweather against almost any hypothetical matchup with any current fighter in or around his weight class, but there is also a big difference in determining legacy based on speculation and what’s actually been done.

It is an echoed sentiment that the fight should have happened five years ago, and it is shame that it hadn’t. Jack Slack went into extreme depth as to how each fighter has deteriorated since the fight was first proposed, and for the most part, I agree with his assessment. But I’d also argue that dwelling on the possibilities of what could have happened doesn’t negate the fact that despite its shortcomings, Mayweather is still considered at the top of his generation and Pacquiao (as much as I deny his accomplishments) is the best chance boxing has at dethroning its king. So while perhaps what really matters is that the crossroad between the two has been met, I still think it’s important to know how that road has been paved.

To be fair to George Foreman, he did qualify to say that “big fights” are defined by the amount of public demand behind them, and in that regard, tonight’s fight has had more drawn-out buildup than perhaps any other fight in history. But it is also coming in an era where fighters hopscotch around weight classes and pick up title belts as bargaining chips rather than treating them as championships, where a fight’s capacity to generate revenue suddenly has a voice in dictating its importance, and undefeated records are preserved at the cost of taking on the toughest challenges.

This is not to say that tonight’s bout isn’t an intriguing matchup. It is. In fact, this is the best fight boxing can currently offer, but boxing also isn’t in the greatest shape.