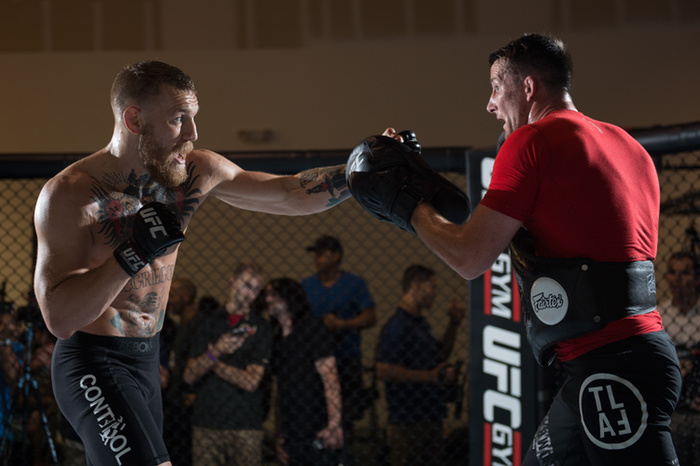 Boxing coach Owen Roddy has been a crucial part of Conor McGregor’s ascent and rise in the UFC, and on November 12 he believes his SBG teammate will look better than ever as he returns to the lightweight division for the first time since New Years Eve 2012.

That night, his left hook knockout of Ivan Buchinger became one of the Irishman’s most celebrated highlight reel finishes, a moment that is often cited be people who think that 155 is the ideal weight class for ‘The Notorious’.

Roddy is confident that the world will see McGregor firing on all cylinders for the first time in Madison Square Garden without the added pounds for welterweight or the strenuous cut for featherweight.

“When he’s fighting at 145 and gets down to 155 that’s when we see him sharper than ever, physically and mentally. Then he does the big cut to get down and I seriously doubt he gets himself back to 100 percent in 24 hours when he fights at featherweight.

“He’s firing at maybe 70 percent when he fights at featherweight. Then, at welterweight, it’s hard for him to carry the same pace that he usually like to push with the extra pounds. As well as that, his explosiveness just isn’t the same with the extra weight.

“There’s no doubt in my mind that this will be the best McGregor ever.”

Although Khabib Nurmagomedov and Jose Aldo feel put out by the matchup, Roddy believes UFC have made the right choice by confirming the super fight.

“This is the matchup that everyone wanted to see. We’ve had the Aldo fight before and the Diaz trilogy fight will come further down the line, but this is for the lightweight title. Conor can be a two-weight world champion again, so I think it was the right choice for UFC.

“Alvarez is a very good opponent. He’s proven himself as an elite fighter, but there are holes in his game that we feel we can capitalize on.”

When assessing Alvarez’s threats to McGregor, Roddy underlined his belief that the Philadelphia native will test the grappling mettle of the outspoken featherweight champion.

“Alvarez really shines when he can bring his opponent into a dog fight. He comes in and he can hang there for five rounds and he has a mauling style that a lot of people can’t figure out.

“We know Conor will be tested if Alvarez manages to force him up against the cage, but we were really happy with how well he did in the Diaz fight in those kinds of situations–his takedown defense was outstanding.”

While Roddy highlighted Alvarez’s power as something McGregor should be weary of in the striking exchanges, he is adamant that the SBG fighter will have a clear advantage with his cleaner connections.

“He’s a very powerful striker, but I don’t think he hits as clean as Conor. Alvarez is a bit wilder in the exchanges. If this fight stays standing I don’t see Conor having any trouble landing his clean shots.

“If Alvarez is smart he’s going to try hit and run and possibly get a hold of Conor to stop him teeing off.”

Like Diaz, Alvarez is well known for his durability and stamina, but Roddy doesn’t think the lightweight champion will have the same success if he tries to eat too many of McGregor’s shots.

“Diaz is on a different level to Alvarez in terms of taking punishment. If Conor lands the shots he did on Diaz against Alvarez, I really think he’ll put Alvarez to sleep, to be honest.

“When I look at this matchup I really feel like a knockout is on the cards. I’m excited to see Conor fight at lightweight again and I have a feeling he’s going to put on a show.”

At featherweight, McGregor boasted a size advantage against all of his opponents and there are many that argue that his stopping power is dependent on outsizing his counterparts.

Roddy has seen his teammate fight on a number of occasions at the higher weight and predicts that a lot of the division will be catching forty winks should they get matched with the Irishman.

“People who are saying his size advantage was the main reason behind his knockouts at featherweight need to realize he has fought at lightweight plenty of times throughout his career.

“Most of those fights ended in first and second round knockouts. This guy went up to welterweight and fought a guy with a granite chin and dropped him on multiple occasions. He’ll never meet someone again with that kind of durability.

“Everybody else is going asleep. At lightweight, I see them all going to sleep.”

Aldo's Retirement Could Be Catastrophic to a McGregor-Less Featherweight Division

With McGregor on Board, UFC 205 Goes From Flawed to Nearly Perfect