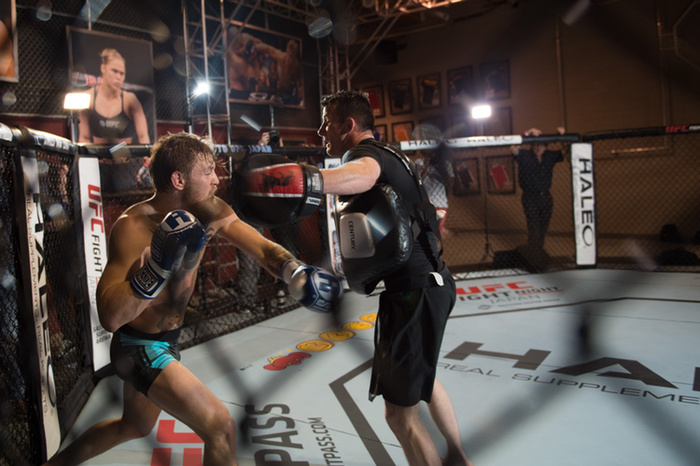 ‘Rowdy’ Owen Roddy, former Irish featherweight champion and striking coach to Conor McGregor, has been busy preparing ‘The Notorious’ for his unification bout with Jose Aldo. A coach for Team Europe on this season’s series of The Ultimate Fighter, the Dubliner has proved that he has a very good eye for breaking down his fighters’ opponents, and because of that we thought it might be a good idea to ask him how UFC 194’s main event will transpire.

While the world now knows that McGregor was suffering from a knee injury during his UFC 189 interim title fight with Chad Mendes, Roddy is expecting a very different bout with Aldo when December 12 rolls around. According to ‘Rowdy’, McGregor will “embarrass” Aldo, something that we have yet to see during the Brazilian’s unprecedented reign at the top of the featherweight division.

“Aldo has to close that distance and Conor is a lot bigger than him, he’s a lot longer. In order for Aldo to land, he’s going to have move forward. He has to get on the inside to land them shots and that’s when he’s going to get clipped. Conor is going to be very elusive and he’ll crack him as he’s trying to come in.

“The thing with the Mendes fight, people are talking about how Mendes took him down. That’s funny to me because in between the rounds Conor was telling us, ‘I just want to take my time, I’ll just relax and eventually I’ll make my move.’ He might have got cut, but he was totally in control of what he was trying to do. People will always talk, but at no point did we feel he was in trouble. In between them rounds he was in a happy place, he was good to go.

“The second round started on the feet again and Mendes just couldn’t deal with that. It’s the same with all of them. At the end of the day, Conor has 25 minutes in there to hit you once on the chin so the odds are always going to be in his favor. The odds are in his favor even if it’s a five minute round, never mind 25 minutes.” 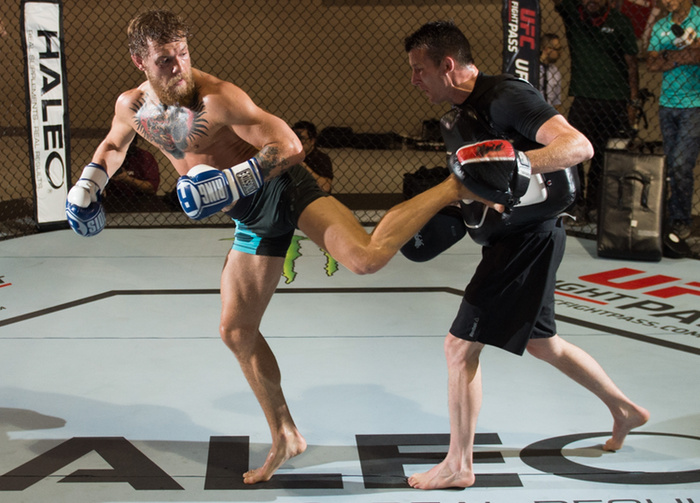 One of the main weapons that people isolate when considering the matchup between McGregor and Aldo is the Brazilian’s famed leg kicks. According to Roddy, Aldo will find it very difficult to land his kicks on the Irishman due to his southpaw stance and his ability to check that particular technique. Roddy maintained that, “Aldo will end up kicking air” when he tries to execute the technique on ‘The Notorious.’

For Roddy, the big difference between the championship pairing is McGregor’s ability judge the distance and his overall understanding of the striking game. To add to that, the former Irish featherweight champion is adamant that it will only take one solid connection from the SBG featherweight over the 25-minute contest for him to end the show and because of that, Roddy believes the bout will be finished late in the first round or early in the second.

“Aldo is very fast, he’s very strong and he’s obviously really good, but I think Conor is on a different level. Conor’s understanding of the whole striking game is what sets him apart from the rest of the field. He’s very good at reading people, he’s very good at judging range and being able to land and then getting out of dodge. Until people go in and do a round with Conor they don’t realize how good he is at actually doing that.

“I can see it being over late in the first round or early in the second, Conor will win by KO or TKO. There is no way Aldo is going to be in there for the whole fight. He’s going to get clipped a couple of times, he’ll panic, he’ll get reckless and then the finish won’t take too long to come after that. Aldo is very tough as well, so it really comes down to how long he can take those punishing shots, but I can’t see it going passed the second.”

Watch Conor McGregor Teach the Training Method He Uses Most