Meet the American Pro Wrestler Who Plays a Trump-Loving Heel. In Mexico. 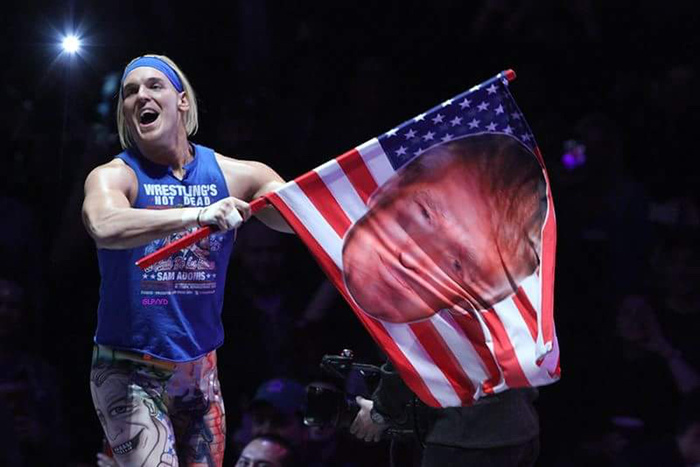 Right around the time Donald Trump clinched the Republican presidential nomination partially on the strength of bashing the nation of Mexico, a light bulb went off for Sam Adonis, the pro wrestling moniker for Sam Polinsky. Polinsky had grown up with a father who promoted independent wrestling shows around his suburban Pittsburgh home. He was the brother of now-retired WWE wrestler Corey Graves. With wrestling all around him, he studied the greats: Ric Flair, Terry Funk, Blackjack Mulligan, and other grapplers of yesterday who fashioned their in-ring characters into seamless extensions of their own personalities. After the 27-year-old Polinsky's own development contract with the WWE was cut short due to a knee injury, he spent half a decade abroad, wrestling hundreds of matches a year for All Star Wrestling UK and finding his own way.

By last April, when he headed to Mexico City to live and work for the world's oldest existing wrestling promotion Consejo Mundial de Lucha Libre (CMLL), Polinsky had become a bombastic, bulky, bleached-blonde heel who gleefully whipped his audience into a frenzy. "When you know you're responsible for that, when you know you got them to that fever pitch, there's nothing quite like it," he says. He billed himself as El Rudo de las Chicas—literally, the villain for the women. And with the 2016 election boiling over, Polinsky added a new wrinkle to the El Rudo de las Chicas persona: he was a brazen Trump supporter in a land full of citizens with good reasons to hate him. And when Trump won the election, he went even further.

Fightland spoke with Polinsky about how he became a heel, the worst reactions to his Trump-loving persona, his own feelings toward the new commander in chief, and the satisfaction of having an audience scream for your head. 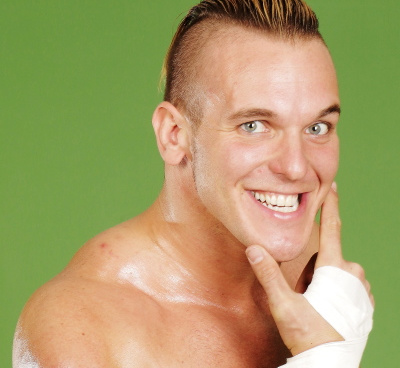 Sam Adonis: Honestly, I’ve always wanted to be a baby face. That’s been my aspiration since I was a kid. I love Hulk Hogan and I’d love to be the number-one baby face that girls like, the men want to hang out with, and the kids look up to—that’s what I’ve always wanted to be. But as of right now, I know I can give the audience a better form of entertainment as a heel. I know I can wind people up better than most people can. A lot of people think it’s as easy as screaming "Shut up!" and "Sit down fat boy!" But there's something about being able to submerge yourself into the character and making people truly believe that's you. That's the art of what wrestling is. And even though I am a bad, over-the-top heel, you do get your applause at the end of the night, people want your photo, and it turns into respect and appreciation.

[Pro wrestling in Mexico] is absolute chaos and madness and it doesn’t make any sense at all. In the United States, it’s very drama-oriented, it’s psychological, they want to sell people based on emotions instead of on athletic prowess. Whereas here, it’s just lucha libre: people’s parents went, their grandparents went. Dating back to the 1930s, wrestling has been such a big part of Mexico City’s culture with the masks. El Santo is a superhero here. It's a lot faster paced. They do the three-versus-three tag-team matches. It's a lot like the circus: it’s very colorful, kinda wild, nothing really makes sense, but everything in the end is okay.

Wrestling’s a morality play. Naturally, you want to be the baddest villain you can think of. It’s no different than Batman or Spiderman: you need to have that ultimate menace that won’t go away and really get under people’s skin in order to really embrace the hero. And in the history of wrestling, there’s always been the evil foreigner.

My first outing was one of our pay-per-views, where I ended up getting a picture of Donald Trump airbrushed onto my tights. The overwhelming reaction from that was just ridiculous and that’s what inspired me to move forward. There was a lot of positive, like, "Wow, that's so funny." And a lot of people were like, "Hey, that’s a bit too much." But that’s the reaction I was going for. I knew that was a sensitive topic and something that could be built upon. This was in July, way before he won the presidency. And honestly, I didn't think he was gonna win the presidency.

Once he won, I don't think I wasted a day: I called a manufacturer, got him to the make the flag, and the rest is history. 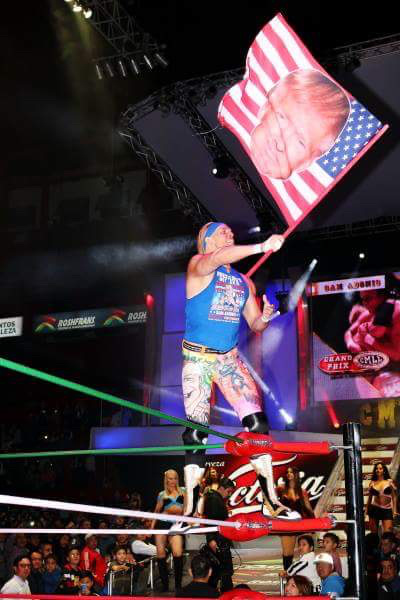 The first day I went out there [with the flag] was the Saturday after the election. I can’t even explain how angry the people were. At first you come out and they see an American flag with a big orange spot on it, and then once it registers who it is and what’s going on, they forget that they're at a wrestling show. They've fully embraced it: "screw this guy." That genuine emotion and passion is what I thrive off of. They forget what they know, they want to just let me have everything they can.

I haven’t been too worried about myself yet, and I think a lot of that has to do with the fact that I’m six-four, 250 pounds. If I was a bit smaller maybe more people would want to try their luck.

People throw popcorn at me, throw beers at me. Not beer cans but those cardboard cups like you'd get at Burger King—they hit me all the time. The Sunday I past, I had just been knocked to the floor [in the ring] and as I'm laying there, an ice-cold beer was thrown on me and I thought I was going into shock or something. But generally, there hasn't been anything too vicious yet. I hope it doesn't get to that.

Sometimes you get a drunk fan that wants to push the issue, or a lot of times they'll want me to make a move. They'll shake my hand and say, "Good lucha, but you're a punk." Okay man, thanks. "No I mean it, you're a punk." They want to see what's gonna happen. I'm a smart enough guy though—you don't want to get into any of that stuff in a place like this.

I like the fact that Trump's not conventional, that he's not a politician: he's a businessman and I have a lot of respect for that. At the same time, I don't know what kind of experience he has to run the country. All I know is compared to what I heard from Hillary Clinton and some of the things I heard from the Democratic side, I would choose the Republicans every day.

By no means am I racist. I have a Mexican girlfriend—I never want that image to get out there. I'm just such a purist for professional wrestling done right. I know I can send people home happy and I can give them the best performance by pushing every button that I can.

I'll leave the event thinking I'm about to get stabbed or punched, when in actuality half the audience comes up to me to get pictures with their kids because they're so entertained by the product I'm selling. If you go to meet Batman, you still want to get your picture taken with the guy dressed up as Bane.

Pro Wrestling and the Art of Political Storytelling