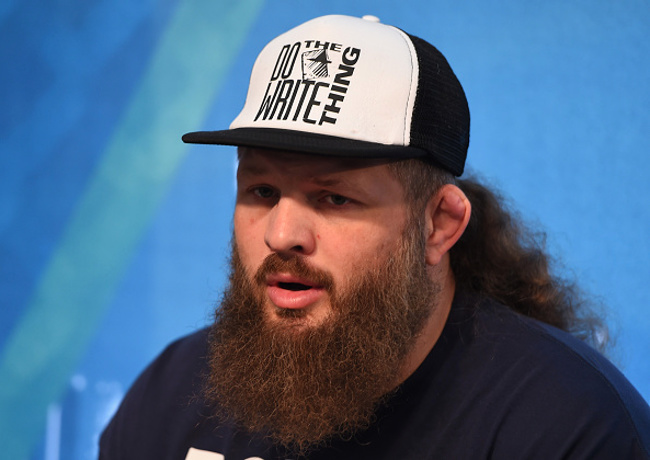 UFC Fight Night 77 is set for the Saitama Super Arena on September 27th and the event will feature the finale of the organization’s first ever reality TV show in Japan. Entitled ‘Road to UFC Japan’ the series sees eight featherweights compete against one another with a multi fight contract on the line for the winner.

This show will differ slightly from the established TUF format in that the fighters will not be sharing a house for the duration of the production. Instead the eight featherweights will be filmed training both at their normal camps in Japan and at the UFC Gym in Las Vegas.

The coaches for ‘Road to UFC Japan’ will veteran heavyweights Roy Nelson and Josh Barnett who are scheduled to fight each other in the main event of UFC Fight Night 77. The names of the eight featherweights currently scheduled to competing on the show were released this week

The cast contains a mixture of up and coming Japanese featherweights alongside some seasoned veterans and several of them are either moving up or down a division. Here is your guide to the eight fighters who have been selected for Road to UFC Japan:

If the name ‘Mizuto Hirota’ seems strangely familiar it’s probably because the 17-7-1 featherweight has already had one not entirely successful stint in the UFC. He joined the organization from Strikeforce but was released after posting back to back decision losses to Rodrigo Damm and Rani Yahya.

Hirota is perhaps best known for being taunted by Shinya Aoki while nursing a freshly broken arm. However he’s also a former Deep, Sengoku and Cage Force 155 lbs champion who holds wins over JMMA veterans like Masakazu Imanari, Katsunori Kikuno and Satoru Kitaoka

He went the distance in both his UFC bouts so Hirota has spend 30 minutes competing inside the Octagon. The 34 year old is currently riding a three fight win streak which included victories over two seasoned Japanese fighters and will probably feel he is the favourite to win what would be a second UFC contract.

Daiki Hata is a charismatic fighter who is known for his interest in cosplay and elaborate hairstyles. ‘DJ Taiki’, as he is affectionately known in Japan, is the reigning Deep 135 lbs champion but has spent the majority of his career competing at featherweight.

He hasn’t been beaten since 2011 and is 6-0-3 in his last nine fights. Taiki is heavy handed, as Hideo Tokoro discovered to his cost in 2009. However the majority of his matches go the distance and DJ Taiki has left fights in the hands of the judges no fewer than 23 times.

Incredibly he has never been stopped and all nine of the losses on his 17-9-7 record have come by way of decision. There aren’t any stellar names on his resume but he holds wins over tough Japanese fighters like Yoshiro Maeda and Kenji Osawa as well as Tokoro.

Akiyo Nishiura travelled to the US in 2013 to spent time training with Matt Hume at AMC Pankration in Seattle and he also tried out for TUF 18 as a bantamweight. ‘Wicky’didn’t make the cut but will get a second chance to secure a UFC contract on the ‘Road to Japan’ show.

Nishiura is known for his eccentric antics both inside and outside of the cage. With dyed hair and tattoos his appearance is slightly unusual but what most stands out about ‘Wicky’ is his style of striking. He will charge forwards throwing wild and crazy looking combinations of punches and this approach has proved quite effective in his career to date.

The 31-year-old has a 13-8-1 record but has knocked out some decent fighters like Hideo Tokoro and Jong Yang Kim. Nishiura might not have the strongest sounding record on paper but he has never been stopped and ‘Wicky’ has been the distance with the likes of Caol Uno, Gustavo Falciroli, and Abel Cullum.

His nickname might be ‘Tyson’ but Nobumitsu Osawa reportedly models himself on Melvin Manhoef. He is very light on his feet but is always looking to let his hands go and land bombs and is a former Shooto Pacific Rim 155 lbs champion.

He lost that title last month when he dropped a unanimous decision to Koshi Matsumoto at Shooto - Gig Tokyo 19 which snapped Osawa’s five fight winning streak. His record currently stands at 8-3 and his signature win is still the 2014 KO of Shinji Sasaki which won him the belt.

Osawa has spent his entire career at 155 lbs and with so many of the ‘Road to Japan’ fighters having previously tested the waters at bantamweight his size and strength could cause opponent’s problems. He has proven punching power and at the age of 28 should be approaching his athletic peak.

Tatsunao Nagakura is another Deep veteran and he was last seen in action on New Year’s Eve when he scored a unanimous decision victory over highly rated American prospect George Hickman. He holds his hands low but it’s because he is confident in his head movement and likes to slip punches and throw hard counters.
Nagakura likes to fight off the back foot and time his opponent’s attacks. Against a low level striker this style is very effective but fighters with decent stand up have been able to pick holes in this defence. As a result Nagakura tends to either win by knockout or get knocked out himself.

Nagakura’s record stands at 11-5, with eight of his wins and four of his losses coming by way of either KO or TKO. Someone once described a fight involving the 31-year-old as a ‘sloppy slugfest’ which seems quite apt and while he’s unlikely to win the entire competition I wouldn’t be surprised if he pocketed some sort of performance bonus along the way.

Tatsuya Ando is the second youngest member of the cast at just 25-years-old. He’s also the least experienced and the only one to have never tasted defeat. In fact he only made his pro debut last September but is already 3-0.

The former collegiate wrestler has made rapid progress in his MMA career. His most recent victory was a decision win in February over Takahiro Ashida, who had 13 victories to his name and was coming off a highly debatable split decision loss against former WEC champion Miguel Torres at the time.

Ando trains under Ryo Chonan at Tribe Tokyo camp and his youth and comparative inexperience make him the most exciting prospect on the cast. He’s already beaten one high level Japanese featherweight in Ashida, the question is can he beat three more to secure that UFC contract?

Hiroto Uesako was a collegiate wrestler who began training with UFC star Yoshihiro Akiyama after he graduated. He trains at the Hearts gym and claims that when Urjah Faber visited recently he was able to not only take the former WEC champion down but to stuff all of his takedowns attempts as well.

Uesako went 1-3 in his first four fights but then put together a string of eight victories in a row. He won the DEEP Future King Tournament in 2013 by beating three opponents in a single night, all by decision and his current record stands at 8-5

The 28-year-old has fought in both Italy and Australia and as well as being a decorated wrestler he holds a black belt in Judo. A lot of his wins have come at the expense of mediocre opponents although he did win a decision against solid Japanse featherweight Kenjiro Takahashi last year.

Teruto Ishihara has only ever lost two fights and both the men who beat him are now plying their trade in the UFC. He holds a 7-2-1 record with the losses coming at the expense of former PXC champion Michinori Tanaka and former Shooto Pacific Rim champion Yuta Sasaki.

When Ishihari wins it is generally courtesy of a KO or TKO, six of his seven victories have come this way. He’s a southpaw with good hands and heavy low kicks and succeeded in tagging Sasaki a few times when they fought in 2014. He survived numerous submission attempts in that fight before ultimately succumbing to a second round rear naked choke.

Meanwhile Tanaka couldn’t submit the 23-year-old at all despite spending nearly two whole rounds in top position. Ishihari is the youngest cast member but at just 5'4 he’s also likely to be by far the smallest. He did fight at featherweight once before and scored a second round knockout of the notoriously hard hitting Koji Mori in 2013.