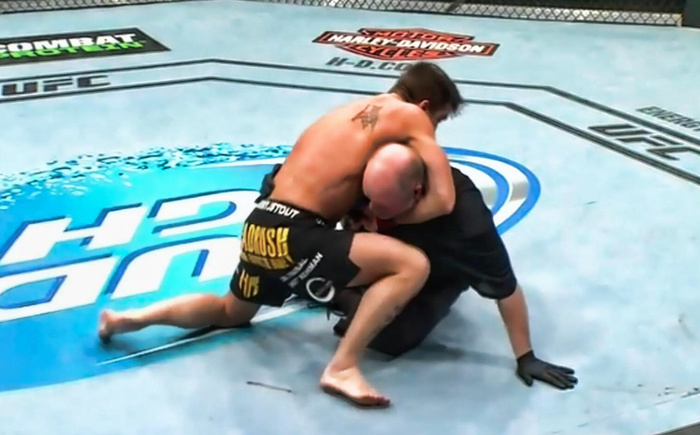 Last week, the Brazilian Superior Justice Court of MMA handed UFC heavyweight Roy Nelson a nine-month suspension and $24,000 fine for booting referee "Big" John McCarthy in the ass. The sequence of events was an emotional post-fight retaliation from Nelson: in his view, McCarthy let him land too many punches on Antonio Silva, a man Nelson considers a friend but whom he nonetheless knocked out at UFC Fight Night 95, so he let his heel do the talking. (Nelson can reduce his sentence with an apology, but don’t hold your breath.)

Nelson's outburst on McCarthy reinforces what a thankless job it is to be the third man in the cage. They say the referee has the best seat in the house, but that’s little consolation when you’re lucky to get a couple thousand bucks for an evening spent doing your job in front of millions of critics. There are other, bigger stresses, too: the referee has wide discretion—the threshold for unanswered strikes and what constitutes intelligent defense are totally subjective—but only microseconds to make judgments that have lasting consequences for a fighter’s record, livelihood, and health. Imposing order is also occasionally hazardous, as the bizarre history of fighters assaulting referees suggests. Sometimes they’re honest accidents, like Sam Stout getting knocked out and guillotining Philippe Chartier.

Sometimes they’re semi-understandable tantrums at perceived injustice, like when Jason High shoved the ref after an early stoppage. Other times, they’re simply bad and embarrassing lapses into lawlessness.

Here are a few memorable moments—occasionally shameful, occasionally hilarious—when fighters lashed out at the officials sharing the cage with them. None, however, is an endorsement: putting your hands on a referee, along with incurring fines and suspensions, can leave you on your back looking at the lights.

Every time I see Keith Peterson reffing a UFC fight, I text someone to say, "The singer from GFY is on TV right now." GFY (take a guess what that acronym means) was part of an especially antisocial subset of the New York hardcore scene that also included bands like Billyclub Sandwich and Punchyourface. I saw some of these bands in the early 2000s: the emptier the VFW hall, the more chairs were thrown and the more fights occurred between people in the crowd wearing Mecca shirts and fitteds while the band chugged away. Considering that point of origin it’s insane that, as a referee, Peterson's become such a reliable agent for enforcing the Unified Rules of MMA (with one glaring exception).

But at an amateur bout between Ben Syers and Bob Ascolillo in 2010, Peterson was a victim of mistaken identity. Within seconds, Syers dropped Ascolillo with one punch, Peterson waved off the fight…and Ascolillo kept going. We've all seen dazed fighters reach for ankles and single legs, but this was something else: Ascolillo put Peterson on his back, established side control, then slid into mount. It's slapstick, but it's also incredible—Ascolillo's game plan was so well rehearsed that he could do it with his brain ricocheting off the inside of his skull. And to Peterson's credit, he waited for his peers to break it up instead of bashing Ascolillo's face with brass knuckles.

#2: A Finnish Guy versus Gilbert Yvel

Years before critics derided Jon Jones and Chuck Liddell for finger-banging their opponents' eyeballs, Gilbert Yvel earned his reputation as a filthy fighter the old-fashioned way: by pushing his thumbs into Don Frye's ocular cavities, elbowing Dan Henderson in the spine, biting at least one opponent, and throwing other varieties strikes that'd only be legal in a prison brawl. The most egregious moment for the former Pride heavyweight came in 2004, when Yvel fought Finnish MMA journeyman Atte Backman. After nearly tumbling over the ropes, the referee reset the pair in a clinch, and even without audio of the ensuing back and forth you can tell that Yvel is all coiled tension and rage. That doesn’t make it any less startling when Yvel smacks the ref with a left hook and kicks him after he drops to the ground. That the Dutch heavyweight still made it to the UFC in 2010 despite that work history is both an indication of his ability to keep a low profile after that disqualification loss—the third of a career that, after a TKO over Ricco Rodriguez this past weekend, still hums along—as well as how hard it is to find good heavyweights, even ones with bad tempers.

If the left hook Pedro Cardenas landed on referee Bert Lowes isn't the most famous instance of fighter-on-ref violence, it's definitely the most syndicated: it's part of the opening credits to Malcolm in the Middle, Bryan Cranston's television vehicle post-Tim Whatley and pre-Walter White. The source material for the clip was a 1982 amateur boxing match at the North American Championships in Las Vegas between Cardenas of Cuba and Willie deWit, a Canadian heavyweight who went on to win a silver medal at the 1984 Olympics. deWit mauled Cardenas throughout the opening round, pressuring him and knocking him down. When Lowes moved in to separate the fighters, Cardenas threw a punch that (unintentionally) smashed Lowes's face, bloodying the referee's nose and sending him face-first into the ropes. After tagging in a replacement ref, deWit stopped Cardenas in the second round.

Before it became a shooting gallery for a drug-dealer-snuffing strongman president, the Philippines played host to one of the most bizarre extracurricular scuffles involving a mixed martial arts fighter and a referee. In 2011, local promotion Universal Reality Combat Championship hosted a bout between featherweight Honorio Banario and Iranian tyrant Razi Jabbari. At 1:35 of the first round, referee Joey Lepiten halted the fight when Jabbari tapped out from a barrage of strikes. Then a Korn song came on over the PA and things turned hectic: after Banario was announced the winner, Jabbari flew off the handle, shoving and cursing and swatting at the ref. The ref knocked Jabbari to the canvas, then URCC promoter Alvin Aguilar—a jiu jitsu expert—leapt through the ropes and subdued Jabbari with a rear-naked choke. Banario went on to capture a title in One FC, where he continues to fight as a lightweight. Jabbari never fought again.

The Subtle Art of Judo Refereeing